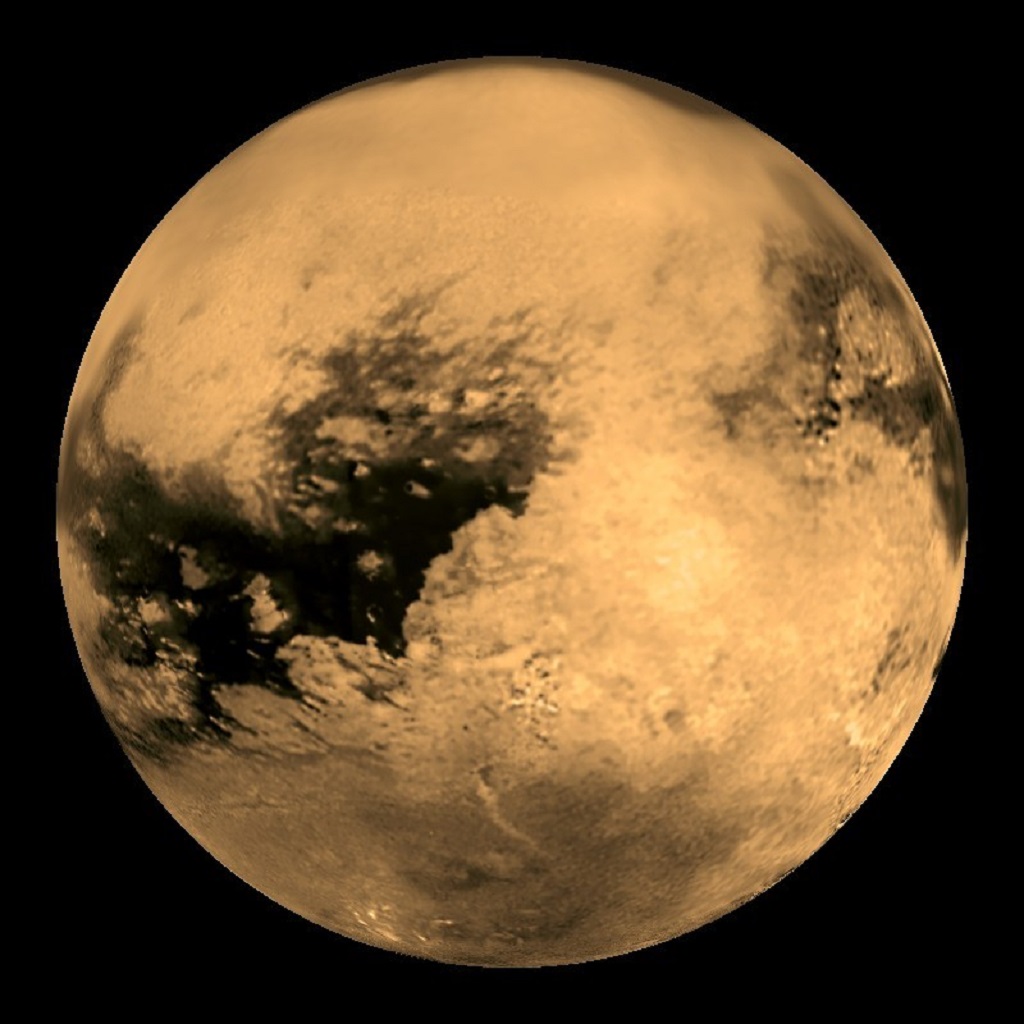 Titan is, with a diameter of 5,150 kilometers (3,200 miles), Saturn’s largest moon and the second largest moon in our Solar System (only Jupiter’s moon Ganymede is larger), roughly 50% larger than our own Moon and 80% more massive. Titan orbits Saturn at a distance of about 1.2 million km (745,000 mi), taking almost 16 days to complete a full orbit. It is tidally locked with Saturn, what means that Titan always orbits with one and the same side to Saturn.

The moon receives just about 1 % of the amount of sunlight Earth gets. This cold world — the temperature at Titan’s surface is about -178 degrees Celsius (-289 degrees Fahrenheit) — is the only moon known to have clouds and a dense hazy, planet-like atmosphere, impenetrable by telescopes and cameras. Its atmospheric pressure is about 60 percent greater than the Earth’s.

Titan’s climate, including wind and rain, creates surface features similar to those of Earth, such as sand dunes, rivers, lakes, seas and deltas, and is dominated by seasonal weather patterns as on Earth. With its liquids (both surface and subsurface) and robust nitrogen atmosphere, Titan’s methane cycle is viewed as an analog to Earth’s water cycle, although at a much lower temperature.

The moon is primarily composed of water ice and rocky material. Although mountains and several possible ice volcanoes have been discovered, Titan is rather smooth with just few impact craters. Its surface is geologically young, between 100 million and 1 billion years old. Geological processes like volcanism and wind may have reshaped its surface.

Titan is the only object other than Earth where liquid hydrocarbon lakes and seas have actually been found (by Cassini) in its polar regions – in abundance in the north polar region and at least one of approximately 20,000 km2, called Ontario Lacus, on its south pole. Just recently, there have also been long-standing methane lakes, or puddles, in Titan’s “tropics” discovered.

The complex atmosphere of Titan might consist of compounds similar to those present in the primordial days of the Earth’s atmosphere. Its thick cloudy atmosphere is mostly nitrogen (95%) like Earth’s, but may contain much higher percentages of smog-like chemicals such as methane and ethane. The smog may be so thick that it actually rains gasoline-like liquids.

Titan also has a presence of organic molecules that contain carbon, hydrogen, oxygen and other elements similar to what is found in Earth’s atmosphere. These chemicals might indicate that this moon could harbor a primitive, exotic form of life or precursor to life.

Many astrobiologists think that (microbial) life could exist in Titan’s lakes of liquid methane, just as organisms on Earth live in water. Such creatures would inhale H2 in place of O2, metabolize it with acetylene instead of glucose, and exhale methane instead of carbon dioxide. But methane-based life forms are only hypothetical, scientists have not yet detected this form of life anywhere.

The Cassini–Huygens probe first flew by Titan on October 26, 2004, and its closest flyby was at 880 km on June 21, 2010, while it took the highest-resolution images ever of the moon’s surface. When Huygens landed on Titan on January 14, 2005, it discovered that many of the moon’s surface features seem to have been formed by flowing fluids at some point in the past.