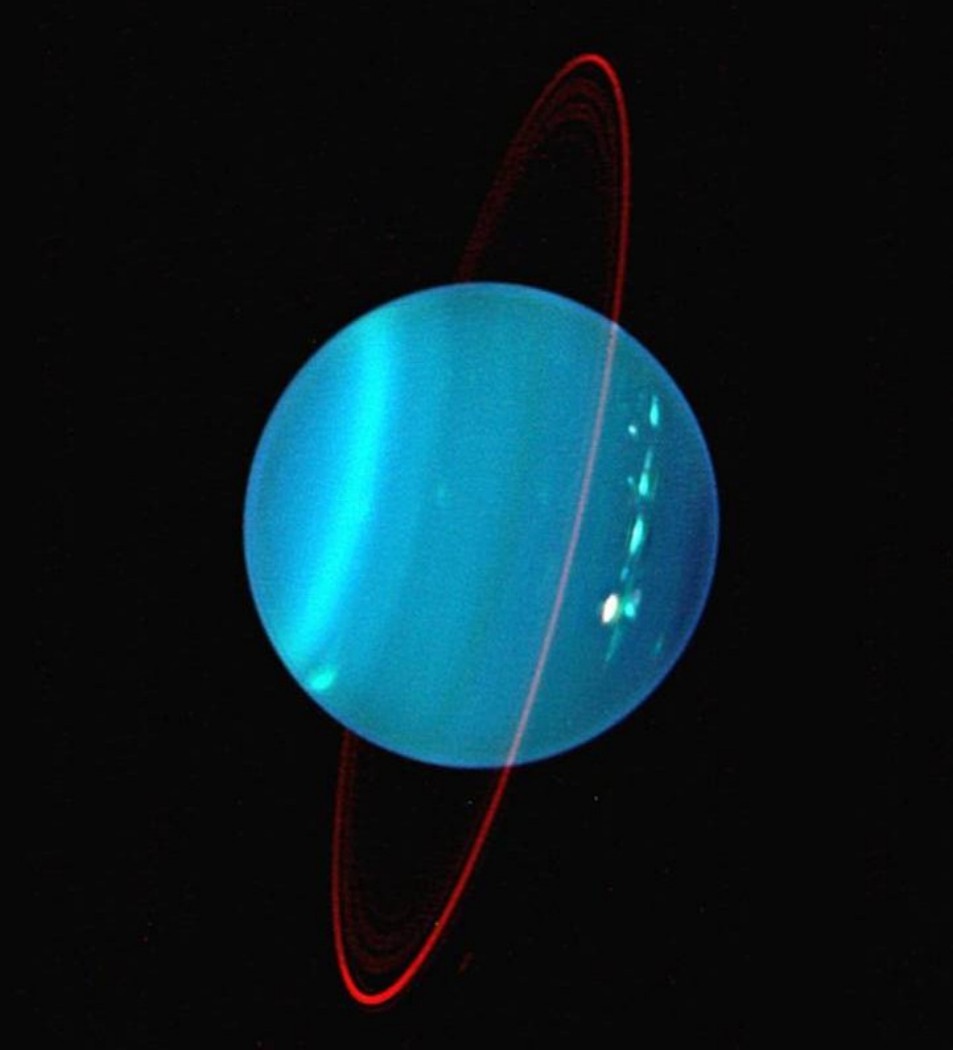 Uranus is the seventh planet from the Sun. It has the third-largest planetary radius and fourth-largest planetary mass in the Solar System. Uranus is a gas giant, but, together with Neptune astronomers sometimes place them in a separate category called “ice giants” because they contain more “ices” such as water, ammonia and methane, along with traces of hydrocarbons, than Jupiter and Saturn. Like the other giant planets, Uranus has a ring system and numerous moons. Both ice giants likely formed closer to the Sun than their present positions, and moved outwards after formation.

Uranus revolves around the Sun once every 84 Earth years. Its average distance from the Sun is roughly 3 billion km (about 20 AU). The intensity of sunlight on Uranus is about 1/400 that on Earth. Because of discrepancies between the predicted and observed orbits, which were most likely due to the gravitational tug of an unseen planet, Neptune was discovered.

The rotational period of the interior of Uranus is 17 hours, 14 minutes, clockwise (retrograde). As on all giant planets, its upper atmosphere experiences very strong winds in the direction of rotation. At some latitudes, such as about two-thirds of the way from the equator to the south pole, visible features of the atmosphere move much faster, making a full rotation in as little as 14 hours.

Uranus’s mass is roughly 14.5 times that of the Earth, making it the least massive of the giant planets. Its diameter is slightly larger than Neptune’s at roughly four times Earth’s. Uranus is the second least dense planet, after Saturn. This indicates that it is made primarily of various ices, such as water, ammonia, and methane. The total mass of ice in Uranus’s interior is between 9.3 and 13.5 Earth masses. Hydrogen and helium constitute only a small part of the total, with between 0.5 and 1.5 Earth masses. The remainder of the non-ice mass is accounted for by rocky material.

Uranus consists of three layers: a rocky (silicate/iron-nickel) core in the center, an icy mantle in the middle and an outer gaseous hydrogen/helium envelope. The core is relatively small, with a mass of only 0.55 Earth masses and a radius less than 20% of Uranus’s; the mantle comprises the bulk of the planet, with around 13.4 Earth masses, while the upper atmosphere is relatively insubstantial, weighing about 0.5 Earth masses and extending for the last 20% of Uranus’s radius.

Uranus’s core has a temperature of about 5000 K. The ice mantle is not in fact composed of ice in the conventional sense, but of a hot and dense fluid consisting of water, ammonia and other volatiles. This fluid is sometimes called a water–ammonia ocean. The bulk compositions of Uranus and Neptune are very different from those of Jupiter and Saturn, with ice dominating over gases.

The fluid interior structure of Uranus means that it has no solid surface. The gaseous atmosphere gradually transitions into the internal liquid layers. It has equatorial and polar radii of 25 559 ± 4 and 24 973 ± 20 km, respectively.

Uranus’s internal heat appears markedly lower than that of the other giant planets. One of the hypotheses suggests that when Uranus was hit by a supermassive impactor, which caused it to expel most of its primordial heat, it was left with a depleted core temperature. Another hypothesis is that some form of barrier exists in Uranus’s upper layers which prevents the core’s heat from reaching the surface.

Although there is no well-defined solid surface within Uranus’s interior, the outermost part of Uranus’s gaseous envelope is called its atmosphere. It is the coldest planetary atmosphere in the Solar System, with a minimum temperature of 49 K (−224 °C). It has a complex, layered cloud structure, with water thought to make up the lowest clouds, and methane thought to make up the uppermost layer of clouds.

The Uranian atmosphere can be divided into three layers: the troposphere, between altitudes of −300 and 50 km; the stratosphere, spanning altitudes between 50 and 4000 km; and the thermosphere/corona extending from 4,000 km to as high as 50,000 km from the surface. There is no mesosphere.

The composition of the Uranian atmosphere is different from the rest of the planet, consisting mainly of molecular hydrogen and helium. The third most abundant constituent is methane. Methane possesses prominent absorption bands in the visible and near-infrared making Uranus aquamarine or cyan in color. The abundances of less volatile compounds such as ammonia, water and hydrogen sulfide in the deep atmosphere are poorly known. Spectroscopy has uncovered traces of water vapor, carbon monoxide and carbon dioxide in the upper atmosphere, which can only originate from an external source such as infalling dust and comets.

The outermost layer of the Uranian atmosphere is the thermosphere and corona, which has a uniform temperature around 800 to 850 K. The Uranian ionosphere is denser than that of either Saturn or Neptune, which may arise from the low concentration of hydrocarbons in the stratosphere. The ionosphere is mainly sustained by solar UV radiation and its density depends on the solar activity.

Uranus has a complicated planetary ring system. The rings are composed of extremely dark particles, which vary in size from micrometers to a fraction of a meter. Thirteen distinct rings are presently known, the brightest being the ε ring. All except two rings of Uranus are extremely narrow—they are usually a few kilometres wide. The rings are probably quite young; the dynamics considerations indicate that they did not form with Uranus. The matter in the rings may once have been part of a moon (or moons) that was shattered by high-speed impacts.

The magnetic field is peculiar, both because it does not originate from the planet’s geometric center, and because it is tilted at 59° from the axis of rotation what results in a highly asymmetric magnetosphere. Neptune has a similarly displaced and tilted magnetic field, suggesting that this may be a common feature of ice giants. One hypothesis is that, unlike the magnetic fields of the other planets, which are generated within their cores, the ice giants’ magnetic fields are generated by motion at relatively shallow depths, for instance, in the water–ammonia ocean.

Uranus’s magnetosphere contains charged particles: protons and electrons with small amounts of hydrogen molecular ions. No heavier ions have been detected. Many of these particles probably derive from the hot atmospheric corona. The particle population is strongly affected by the Uranian moons that sweep through the magnetosphere leaving noticeable gaps. The particle population is also high enough to cause darkening or space weathering of the moon’s surfaces and rings. Uranus has relatively well developed aurorae, which are seen as bright arcs around both magnetic poles. Uranus’s aurorae seem to be insignificant for the energy balance of the planetary thermosphere.

At ultraviolet and visible wavelengths, Uranus’s atmosphere is remarkably bland in comparison to the other gas giants. One proposed explanation for this dearth of features is that Uranus’s internal heat appears markedly lower than that of the other giant planets. The lowest temperature recorded in Uranus’s tropopause is 49 K, making Uranus the coldest planet in the Solar System.

The visible southern hemisphere of Uranus can be subdivided into two regions: a bright polar cap and dark equatorial bands. A narrow band is the brightest large feature on the visible surface of the planet. It is called a southern “collar”. The cap and collar are thought to be a dense region of methane clouds. Besides the large-scale banded structure, there are clouds, although there are differences between the clouds of each hemisphere. The northern clouds are smaller, sharper and brighter. Some small clouds live for hours, while at least one southern cloud may have persisted since Voyager flyby in 1986.

At the equator winds are retrograde, which means that they blow in the reverse direction to the planetary rotation. Their speeds are from −100 to −50 m/s. Wind speeds increase with the distance from the equator. Closer to the poles, the winds shift to a prograde direction, flowing with the planet’s rotation. Windspeeds at −40° latitude range from 150 to 200 m/s. In the northern hemisphere maximum speeds as high as 240 m/s are observed near +50 degrees of latitude.

Physical seasonal changes are happening in Uranus. Near the summer and winter solstices, Uranus’s hemispheres lie alternately either in full glare of the Sun’s rays or facing deep space. The brightening of the sunlit hemisphere is thought to result from the local thickening of the methane clouds and haze layers located in the troposphere. Other changes in the southern polar region can be explained by changes in the lower cloud layers.

Uranus has 27 known moons; the five main moons are Miranda, Ariel, Umbriel, Titania and Oberon. The Uranian system has a unique configuration among the planets because its axis of rotation is tilted sideways, nearly into the plane of its revolution about the Sun. Its north and south poles therefore lie where most other planets have their equators. This gives it seasonal changes completely unlike those of the other major planets. Each pole gets around 42 years of continuous sunlight, followed by 42 years of darkness. Near the time of the equinoxes, the Sun faces the equator of Uranus giving a period of day-night cycles similar to those seen on most of the other planets. Uranus reached its most recent equinox on December 7, 2007.

One result of this axis orientation is that, on average during the year, the polar regions of Uranus receive a greater energy input from the Sun than its equatorial regions. Nevertheless, Uranus is hotter at its equator than at its poles. The underlying mechanism which causes this is unknown. The reason for Uranus’s unusual axial tilt is also not known with certainty, but the usual speculation is that during the formation of the Solar System, an Earth-sized protoplanet collided with Uranus, causing the skewed orientation.