NASA-funded astronomers have, for the first time, spotted planets orbiting Sun-like stars in a crowded cluster of stars. The findings offer the best evidence yet that planets can sprout up in dense stellar environments. Although the newfound planets are not habitable, their skies would be starrier than what we see from Earth. Astronomers have discovered two gas giant planets orbiting stars in the Beehive cluster, a collection of about 1,000 tightly packed stars. The planets are the first ever found around Sun-like stars in a cluster of stars. Such planets, even though they are not habitable, would have skies filled with many bright stars as illustrated in this artist’s concept. A gas giant planet is shown to the right of its Sun-like star, and all around, the stars of the Beehive cluster shine brightly in the dark. Image Credit: NASA/JPL-Caltech

The starry-skied planets are two so-called hot Jupiters, which are massive, gaseous orbs that are boiling hot because they orbit tightly around their parent stars. Each hot Jupiter circles a different Sun-like star in the Beehive Cluster, also called the Praesepe, a collection of roughly 1,000 stars that appear to be swarming around a common center.

The Beehive is an open cluster, or a grouping of stars born at about the same time and out of the same giant cloud of material. The stars therefore share a similar chemical composition. Unlike the majority of stars, which spread out shortly after birth, these young stars remain loosely bound together by mutual gravitational attraction.

“We are detecting more and more planets that can thrive in diverse and extreme environments like these nearby clusters,” said Mario R. Perez, the NASA astrophysics program scientist in the Origins of Solar Systems Program. “Our galaxy contains more than 1,000 of these open clusters, which potentially can present the physical conditions for harboring many more of these giant planets.”

The two new Beehive planets are called Pr0201b and Pr0211b. The star’s name followed by a “b” is the standard naming convention for planets. 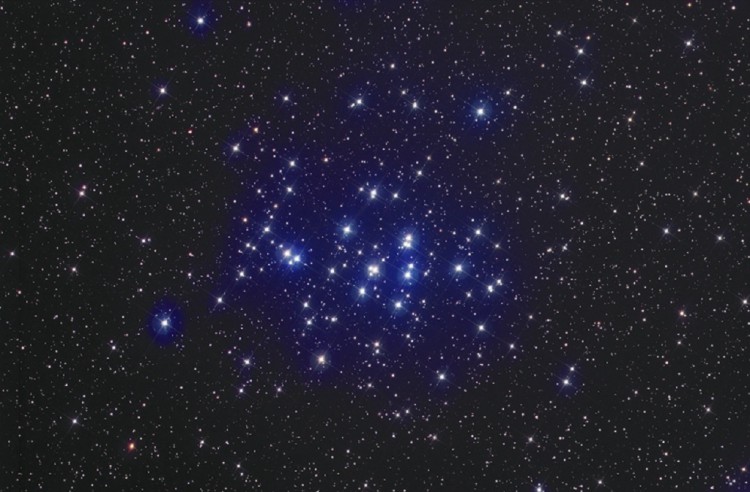 The Beehive Cluster (also called the Praesepe and designated M44 and NGC 2632) is an open star cluster that contains some 1,000 stars, located about 577 light-years away in the constellation Cancer. Image Credit: Mike Sherick

“These are the first ‘b’s’ in the Beehive,” said Sam Quinn, a graduate student in astronomy at Georgia State University in Atlanta and the lead author of the paper describing the results, which was published in the Astrophysical Journal Letters.

Quinn and his team, in collaboration with David Latham at the Harvard-Smithsonian Center for Astrophysics, discovered the planets by using the 1.5-meter Tillinghast telescope at the Smithsonian Astrophysical Observatory’s Fred Lawrence Whipple Observatory near Amado, Arizona to measure the slight gravitational wobble the orbiting planets induce upon their host stars. Previous searches of clusters had turned up two planets around massive stars but none had been found around stars like our Sun until now.

“This has been a big puzzle for planet hunters,” Quinn said. “We know that most stars form in clustered environments like the Orion Nebula, so unless this dense environment inhibits planet formation, at least some Sun-like stars in open clusters should have planets. Now, we finally know they are indeed there.”

The results also are of interest to theorists who are trying to understand how hot Jupiters wind up so close to their stars. Most theories contend these blistering worlds start out much cooler and farther from their stars before migrating inward.

“The relatively young age of the Beehive cluster makes these planets among the youngest known,” said Russel White, the principal investigator on the NASA Origins of Solar Systems grant that funded this study. “And that’s important because it sets a constraint on how quickly giant planets migrate inward — and knowing how quickly they migrate is the first step to figuring out how they migrate.”

The research team suspects planets were turned up in the Beehive cluster because it is rich in metals. Stars in the Beehive have more heavy elements such as iron than the Sun has.

According to White, “Searches for planets around nearby stars suggest that these metals act like a ‘planet fertilizer,’ leading to an abundant crop of gas giant planets. Our results suggest this may be true in clusters as well.”