An Anglo-German team of astronomers has discovered a new planet orbiting a nearby star at just the right distance for an Earth-like climate that could support life. 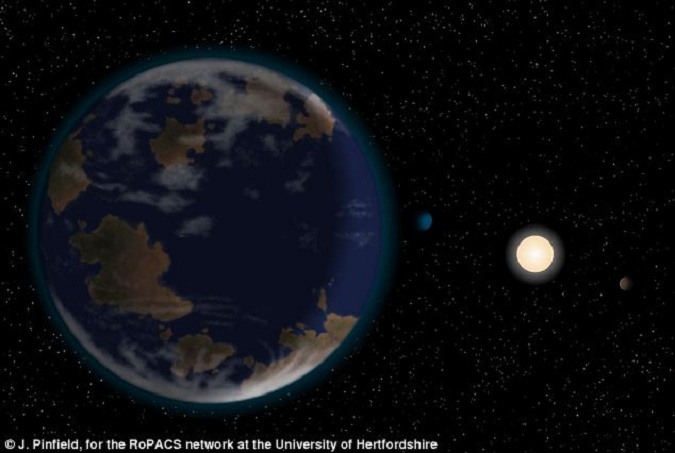 This artist’s impression shows HD40307 g in the foreground (on the left hand side), with its host star HD40307 and two other planets in the system (on the right-hand side). Image Credit: J. Pinfield

Located 43 light-years away in the southern constellation Pictor, the orange-colored dwarf star HD 40307 has previously been found to hold three “super-Earth” exoplanets in close orbit. Now, a team of researchers poring over data from ESO’s HARPS (High Accuracy Radial velocity Planet Searcher) has identified what seems to be three new exoplanets in the HD 40307 system.

These new exoplanet candidates, designated with the letters e, f, and g, all appear to be super-Earths as well, with one of them, HD 40307 g, appearing to be orbiting in the star’s “Goldilocks Zone”, the band around a star where temperatures are neither too hot nor too cold for liquid water to exist.

In addition, HD 40307 g is located far enough away from its star not be tidally locked. This means it wouldn’t have one side subject to constant heat and radiation while its other “far side” remains cold and dark, thus avoiding the intense variations in global climate, weather and winds that would come as a result.

A newly discovered “super-Earth” planet, HD 40307 g, is in the “Goldilocks Zone;” just the right place to support liquid water. It resides in a system of six worlds orbiting a, stable, elderly dwarf star 44 light years away.

“The star HD 40307 is a perfectly quiet old dwarf star, so there is no reason why such a planet could not sustain an Earth-like climate,” said Guillem Angla-Escude from Germany’s University of Goettingen, who led the research with Mikko Tuomi at the University of Hertfordshire in Britain.

If HD 40307 g, with a mass of at least seven times that of Earth, is indeed confirmed, it may very well get onto the official short list of potentially habitable worlds outside our Solar System — although those others are quite a bit closer to the mass of our own planet.

While the other planetary candidates in the HD 40307 system are positioned much more closely to the star, with b, c, d, and e within or at the equivalent orbital distance of Mercury, g appears to be in the star’s liquid-water habitable zone, orbiting at 0.6 AU in an approximately 200-day-long orbit. At this distance the exoplanet receives around 62% of the solar energy as Earth gets from the Sun. 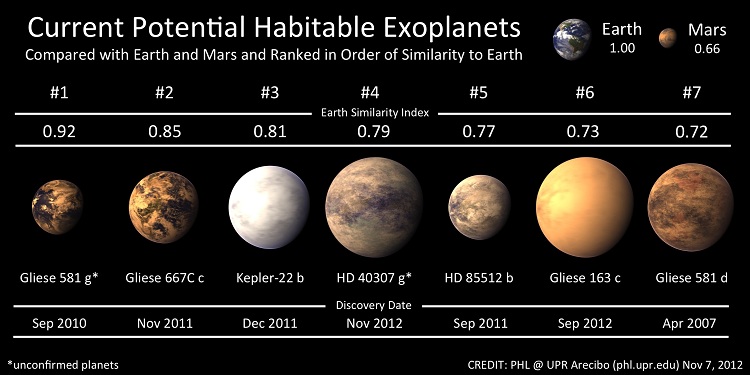 More than 800 planets have been discovered outside our Solar System since the first was detected in the early 1990s, but only a handful of those have been in the habitable zone. Even more rare are planets in the zone that rotate, as this one does, to create a day-time and night-time, which increases the chance of an Earth-like environment. Those that don’t spin are tidally locked, with one half in constant darkness.

“This is the closest one to Earth in a habitable zone that is not tidally locked,” University of Hertfordshire astronomer Hugh Jones said. “Just as Goldilocks liked her porridge to be neither too hot nor too cold but just right, this planet, or indeed any moons that it has, lie in an orbit comparable to Earth, increasing the probability of it being habitable.”

Although news like this is exciting, as we’re always eagerly anticipating the announcement of a true, terrestrial Earth-like world that could be host to life as we know it, it’s important to remember that HD 40307 g is still a candidate—more observations are needed to not only confirm its existence but also to find out exactly what kind of planet it may be. We have to learn more about its possible atmosphere and life-hosting capabilities. Still, just finding potential Earth-sized worlds in a system like HD 40307′s is a big deal for planetary scientists. This system is not like ours, yet somewhat similar planets have still formed… that in itself is a clue to what else may be out there.

“The planetary system around HD 40307 has an architecture radically different from that of the Solar System… which indicates that a wide variety of formation histories might allow the emergence of roughly Earth-mass objects in the habitable zones of stars”, the team reports.

The astronomers made the discovery, unveiled in a research paper in the journal Astronomy & Astrophysics, by examining data from the HARPS spectrograph, attached to a European Southern Observatory telescope at La Silla in Chile’s Atacama desert.

The HARPS device is able to pick up tiny changes in the color of the light coming from a host star as it wobbles under the gravitational influence of orbiting planets. The team used a novel technique to filter out signals caused by the host star itself. “This significantly increased our sensitivity and enabled us to reveal three new planets around the star,” said Mikko Tuomi.