A new study confirms what scientists have long suspected: Cosmic rays – energetic particles that pelt Earth from all directions – are born in the violent aftermath of supernovae, exploding stars throughout our galaxy. When stars explode, the supernovae send off shock waves like the one shown in this artist’s rendition, which accelerate protons to cosmic-ray energies through a process known as Fermi acceleration.  Image Credit: Greg Stewart / SLAC National Accelerator Laboratory

A research team led by scientists at the Kavli Institute for Particle Astrophysics and Cosmology at the Department of Energy’s (DOE) SLAC National Accelerator Laboratory sifted through four years of data from NASA’s Fermi Gamma-ray Space Telescope to find the first unambiguous evidence of how cosmic rays are born.

Reporting in the Feb. 15 issue of Science, the team identified two ancient supernovae whose shockwaves accelerated protons to nearly the speed of light, turning them into what we call cosmic rays. When these energetic protons collided with static protons in gas or dust they gave rise to gamma rays with distinctive signatures, giving scientists the smoking-gun evidence they needed to finally verify the cosmic-ray nurseries. This image combines data from ESA’s Herschel Space Observatory with Fermi’s gamma-ray observations (magenta) of supernova remnant W44. This remnant is a prime example of the remains of a supernova interacting with dense interstellar material around it and was one of two supernova remnants that provided the data Fermi needed to prove that cosmic rays are accelerated in supernova shockwaves. Image Credit: NASA/DOE/Fermi LAT Collaboration and ESA/Herschel

Protons make up 90 percent of the cosmic rays that hit Earth’s atmosphere, triggering showers of particles that reach the ground and creating radiation for air travelers. Scientists have theorized that two of the most likely sources for the protons are supernova explosions within our Milky Way galaxy and powerful jets of energy from black holes outside the galaxy. But in neither case had the necessary evidence been nailed down.

“The energies of these protons are far beyond what the most powerful particle colliders on Earth can produce,” said Stefan Funk, astrophysicist with the Kavli Institute and Stanford University, who led the analysis. “In the last century we’ve learned a lot about cosmic rays as they arrive here. We’ve even had strong suspicions (see photo below) about the source of their acceleration, but we haven’t had unambiguous evidence to back them up until recently.” Enrico Fermi’s notebook of December 1948 contains four pages that represent the genesis of his theory of cosmic rays, particles that can hit the Earth’s atmosphere at high speeds. In these pages, he worked out the acceleration of cosmic rays due to a series of collisions with magnetic clouds moving through the universe, a process later named Fermi acceleration. Photo by: University of Chicago Library

That’s because the positively charged protons are deflected by any magnetic field they encounter along the way, so tracing them back to their source is impossible. But researchers using Fermi’s main instrument, the Large Area Telescope, were able to approach the problem straight on through gamma-ray observations.

The supernova shockwaves accelerate protons to cosmic-ray energies through a process known as Fermi acceleration, in which the protons are trapped in the fast-moving shock region by magnetic fields. Collisions between the speeding protons and slower-moving protons, most often in surrounding clouds of dust or gas, can create particles called neutral pions. The pions, in turn, decay quickly into gamma-ray photons, the most energetic form of light. Unaffected by magnetic fields, the gamma rays travel in a straight line and can be traced back to their source. The gamma rays from this particular process come in a distinctive range of energies. 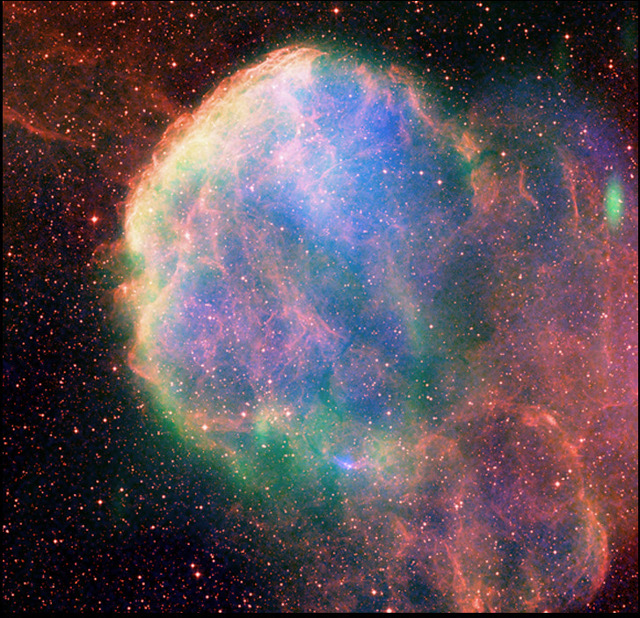 Fermi researchers analyzed data from two supernova remnants thousands of light-years away. Both turned out to be strong sources of gamma rays, but not at energies below what neutral pion decay would produce – the observational proof scientists had been looking for.

“Until now, we had only theoretical calculations and common sense to guide us in the belief that cosmic rays were generated in supernova remnants,” said Jerry Ostriker, an astrophysicist from Columbia University who was not involved in the study. “The direct detection of pion-decay signatures in supernova remnants closes the loop and provides dramatic observational evidence for a significant component of cosmic rays.” In order to understand the origin and acceleration of cosmic-ray protons, researchers used data from the Fermi Gamma-ray Space Telescope and targeted W44 and IC 443, two supernova remnants thousands of light-years away. Both turned out to be strong sources of gamma rays, but not at energies below what neutral pion decay would produce – the observational proof scientists had been looking for. Image Credit: NASA/DOE/Fermi LAT Collaboration

As humans spend more time high up in and above the atmosphere, many questions remain to explain both the way cosmic rays affect life here on Earth, and the fundamental processes that control their origins and acceleration. “Astronauts have documented that they actually see flashes of light associated with cosmic rays,” Funk noted. “It’s one of the reasons I admire their bravery – the environment out there is really quite tough.” The next step in this research, Funk added, is to understand the exact details of the acceleration mechanism and also the maximum energies to which supernova remnants can accelerate protons.

Finding evidence for the acceleration of protons has long been a key issue in the efforts to explain the origin of cosmic rays. This pair of spectra from two supernova remnants, shown here with data from various satellites and wavelengths, are the “smoking gun” that researchers have been looking for. The Fermi Large Area Telescope’s observations fit neatly with predictions of neutral pion decay. Image Credit: NASA/DOE/Fermi LAT Collaboration, Chandra X-ray Observatory, ESA Herschel/XMM-Newton

Kavli Institute Director Roger Blandford, who participated in the analysis, said, “It’s fitting that such a clear demonstration showing supernova remnants accelerate cosmic rays came as we celebrated the 100th anniversary of their discovery. It brings home how quickly our capabilities for discovery are advancing.”