Scientists can’t travel deep space the way Columbus sailed and charted the New World or Lewis and Clark mapped the west. But, researchers at Case Western Reserve University and two partnering institutions have found a possible way to map the spread and structure of the Universe, guided by the light of quasars. 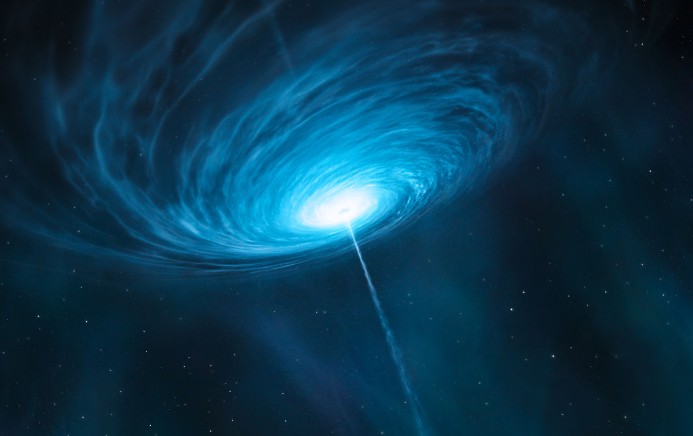 This is an artist’s impression of a quasar. Image Credit: ESO

The technique, combined with the expected discovery of millions more far-away quasars over the next decade, could yield an unprecedented look back to a time shortly after the Big Bang, when the Universe was a fraction the size it is today.

Researchers found the key while analyzing the visible light from a small group of quasars. Patterns of light variation over time were consistent from one quasar to another when corrected for the quasar’s redshift. This redshift occurs because an expanding Universe carries the quasars away from us, thus making the light from them appear redder (hence the term), and also making the time variations appear to occur more slowly.

Turning this around, by measuring the rate at which a quasar’s light appears to vary and comparing this rate to the standard rate at which quasars sampled actually vary, the researchers were able to infer the redshift of the quasar.

Knowing the quasar redshift enables the scientists to calculate the relative size of the Universe when the light was emitted, compared to today.

“It appears we may have a useful tool for mapping out the expansion history of the Universe,” said Glenn Starkman, a physics professor at Case Western Reserve and an author of the study, published this summer in Physical Review Letters.

“If we could measure the redshifts of millions of quasars, we could use them to map the structures in the Universe out to a large redshift.” The larger the redshift, the farther and older the light source.

The group plans to seek larger samples of quasars, to confirm the patterns are consistent and can be used to calculate their redshifts everywhere across the Universe.

The scientists graphed the amount of light from 14 quasars recorded by the Massive Compact Halo Objects project, which sought evidence of dark matter in and around the Milky Way. Light from each quasar was measured repeatedly over hundreds of days.

Graphing revealed phases during which the amount of light would either increase or decrease in a linear fashion over an extended period of time.

Although other properties varied, the rate at which the measurable light changed was nearly identical among all 14 quasars, once scientists corrected for the effects of the Universe’s expansion. “It’s as if there was a dimmer switch on them with someone turning it to the left then the right,” Starkman said. “The overall trend was surprisingly consistent.”

This consistency of patterns enabled the scientists to accurately calculate the cosmological redshift of one quasar from another. The researchers tested this capability in two ways.

They fit segments of the light curves, that is, the measured light over time, to straight lines. The slopes of the lines were consistent and appeared to be directly related to the quasars’ redshifts. By comparing corresponding slopes of 13 quasars with a known redshift value to the slopes of one other quasar, the researchers could calculate the redshift of the lone quasar within two percentage points.

In a second approach, the researchers took large sections of the light curves of two quasars and concentrated on the segments that matched most closely. By varying the ratio of the redshifts of the two quasars to try to get the best possible match of the two light curves, they were able to determine the ratio of the quasars’ redshifts to within 1.5 percentage points.

Astronomers have used the bright light of supernovae with redshifts up to about 1.7 to measure the accelerating expansion of the Universe. A star with a redshift of 1.7 would have been emitting that light when the Universe was 2.7 times smaller than today.

Quasars are older and farther away and have been measured with redshifts of up to 7.1, which means they emitted the light we are seeing when the Universe was as small as one-eighth the size it is today.

If this method of determining quasar redshifts proves applicable to higher redshift quasars, scientists could have millions of markers to trace the growth and evolution of structure and the expansion of the Universe out to large distances and early times.

“This could help us learn about how gravity has assembled structure in the Universe.” Starkman said. “And, the rate of structure growth can help us determine whether dark energy or modified laws of gravity drive the accelerating expansion of the Universe.”

The work was led by De-Chang Dai, who earned his PhD working with Starkman and was most recently a member of the Astrophysics, Cosmology and Gravity Centre, University of Cape Town. The other authors include Amanda Weltman, PhD, a senior cosmology lecturer at the Centre, and brothers Branislav Stojkovic, a doctoral student in computer science and engineering, and Dejan Stojkovic, a physics professor at the State University of New York at Buffalo. Dejan Stojkovic also earned his PhD with Starkman and was later a visiting assistant professor at Case Western Reserve.

See here for the professional publication.