News by Subject » Astrophysics » Rain is Falling from Saturn’s Rings

Astronomers using the W. M. Keck Observatory tracked the “rain” of charged water particles into the atmosphere of Saturn and found the extent of the ring-rain is far greater, and falls across larger areas of the planet, than previously thought. The work reveals the rain influences the composition and temperature structure of parts of Saturn’s upper atmosphere. This analysis was led by the University of Leicester, England 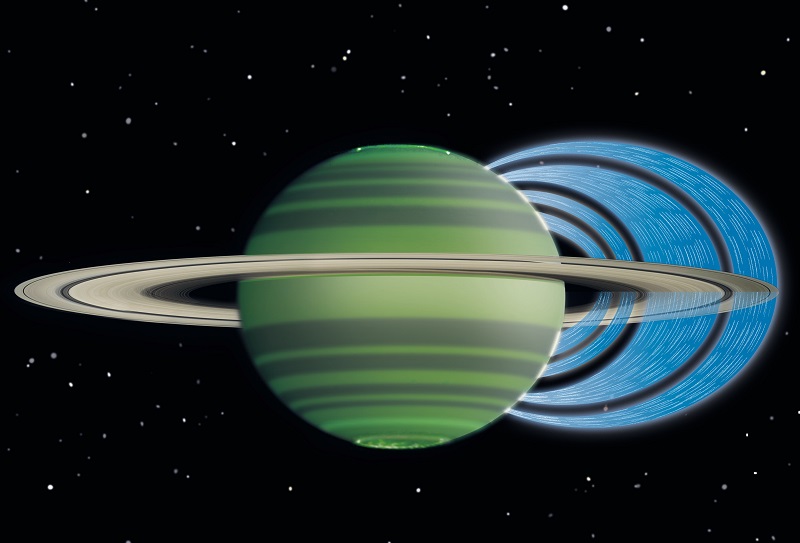 This artist’s concept illustrates how charged water particles flow into the Saturnian atmosphere from the planet’s rings, causing a reduction in atmospheric brightness. The observations were made with the W. M. Keck Observatory on Mauna Kea, Hawaii, with NASA funding. The analysis was led by the University of Leicester, England. Image Credit: NASA/JPL-Caltech/Space Science Institute/University of Leicester

“Saturn is the first planet to show significant interaction between its atmosphere and ring system,” said James O’Donoghue, the paper’s lead author and a postgraduate researcher at Leicester. “The main effect of ring rain is that it acts to ‘quench’ the ionosphere of Saturn, severely reducing the electron densities in regions in which it falls.”

“It turns out a major driver of Saturn’s ionospheric environment and climate across vast reaches of the planet are ring particles located 120,000 miles [200,000 kilometers] overhead,” said Kevin Baines, a co-author on the paper, based at NASA’s Jet Propulsion Laboratory, Pasadena, Calif. “The ring particles affect which species of particles are in this part of the atmospheric temperature.”

In the early 1980s, images from NASA’s Voyager spacecraft showed two to three dark bands on Saturn and scientists theorized that water could have been showering down into those bands from the rings. Those bands were not seen again until 2011 when the the team observed the planet with Keck Observatory’s NIRSPEC, a unique, near-infrared spectrograph that combines broad wavelength coverage with high spectral resolution, allowing the observers to clearly see subtle emissions from the bright parts of Saturn.

The ring rain’s effect occurs in Saturn’s ionosphere (Earth has a similar ionosphere), where charged particles are produced when the otherwise neutral atmosphere is exposed to a flow of energetic particles or solar radiation. When the scientists tracked the pattern of emissions of a particular hydrogen molecule consisting of three hydrogen atoms (rather than the usual two), they expected to see a uniform planet-wide infrared glow. What they observed instead was a series of light and dark bands with a pattern mimicking the planet’s rings. Saturn’s magnetic field “maps” the water-rich rings and the water-free gaps between rings onto the planet’s atmosphere.

They surmised that charged water particles from the planet’s rings were being drawn towards the planet by Saturn’s magnetic field and neutralizing the glowing triatomic hydrogen ions. This leaves large “shadows” in what would otherwise be a planet-wide infrared glow. These shadows cover 30 to 43 percent of the planet’s upper atmosphere surface from around 25 to 55 degrees latitude. This is a significantly larger area than suggested by the Voyager images.

Both Earth and Jupiter have a very uniformly glowing equatorial region. Scientists expected this pattern at Saturn, too, but they instead saw dramatic differences at different latitudes.

“Where Jupiter is glowing evenly across its equatorial regions, Saturn has dark bands where the water is falling in, darkening the ionosphere,” said Tom Stallard, one of the paper’s co-authors at Leicester. “We’re now also trying to investigate these features with an instrument on NASA’s Cassini spacecraft. If we’re successful, Cassini may allow us to view in more detail the way that water is removing ionized particles, such as any changes in the altitude or effects that come with the time of day.”

The paper appears in this week’s issue of the journal Nature.

The W. M. Keck Observatory operates the largest, most scientifically productive telescopes on Earth. The two, 10-meter optical/infrared telescopes on the summit of Mauna Kea on the Island of Hawaii feature a suite of advanced instruments including imagers, multi-object spectrographs, high-resolution spectrographs, integral-field spectroscopy and a world-leading laser guide star adaptive optics system.