Scientists at the University of Cambridge have used cutting-edge infrared surveys of the sky to discover a new population of enormous, rapidly growing supermassive black holes in the early Universe. The black holes were previously undetected because they sit cocooned within thick layers of dust. The new study has shown however that they are emitting vast amounts of radiation through violent interactions with their host galaxies. The team publish their results in the journal Monthly Notices of the Royal Astronomical Society. 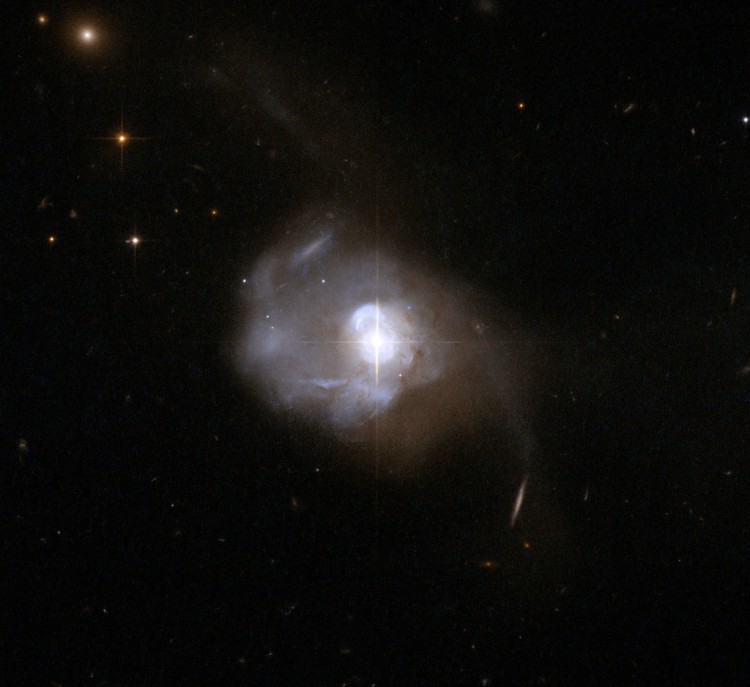 Markarian 231 is an example of a galaxy with a dusty rapidly growing supermassive black hole located 600 million light years from Earth. The black hole is the very bright source at the centre of the galaxy. Rings of gas and dust can be seen around it as well as “tidal tails” left over from a recent impact with another galaxy. Image Credit: NASA, ESA, the Hubble Heritage Team (STScI/AURA)-ESA/Hubble Collaboration and A. Evans (University of Virginia, Charlottesville/NRAO/Stony Brook University)

The research indicates that that there may be as many as 400 such giant black holes in the part of the Universe that we can observe. “These results could have a significant impact on studies of supermassive black holes” said Dr Manda Banerji, lead author of the paper. “Most black holes of this kind are seen through the matter they drag in. As the neighbouring material spirals in towards the black holes, it heats up. Astronomers are able to see this radiation and observe these systems.”

“Although these black holes have been studied for some time, the new results indicate that some of the most massive ones may have so far been hidden from our view.” The newly discovered black holes, devouring the equivalent of several hundred Suns every year, will shed light on the physical processes governing the growth of all supermassive black holes. 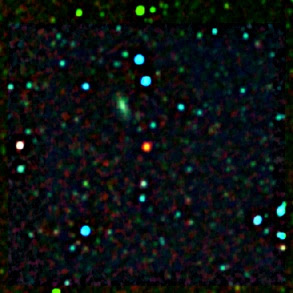 Infrared colour image of ULASJ1234+0907 located 11 billion light years from Earth and one of the reddest objects in the sky. This red colour is caused by the enormous amounts of dust within this system. The dust preferentially absorbs bluer light and is responsible for obscuring this supermassive black hole in the visible wavelengths. Image Credit: image created using data from UKIDSS and the Wide-field Infrared Survey Explorer (WISE) observator

Supermassive black holes are now known to reside at the centres of all galaxies. In the most massive galaxies in the Universe, they are predicted to grow through violent collisions with other galaxies, which trigger the formation of stars and provides food for the black holes to devour. These violent collisions also produce dust within the galaxies therefore embedding the black hole in a dusty envelope for a short period of time as it is being fed.

In comparison with remote objects like ULASJ1234+0907, the most spectacular example of a dusty, growing black hole in the local Universe is the well-studied galaxy Markarian 231 located a mere 600 million light years away. Detailed studies with the Hubble Space Telescope have shown evidence that Markarian 231 underwent a violent impact with another galaxy in the recent past. ULASJ1234+0907 is a more extreme version of this nearby galaxy, indicating that conditions in the early Universe were much more turbulent and inhospitable than they are today.

In the new study, the team from Cambridge used infrared surveys being carried out on the UK Infrared Telescope (UKIRT) to peer through the dust and locate the giant black holes for the first time. Prof. Richard McMahon, co-author of the study, who is also leading the largest infrared survey of the sky, said: “These results are particularly exciting because they show that our new infrared surveys are finding super massive black holes that are invisible in optical surveys. These new quasars are important because we may be catching them as they are being fed through collisions with other galaxies. Observations with the new Atacama Large Millimeter Array (ALMA) telescope in Chile will allow us to directly test this picture by detecting the microwave frequency radiation emitted by the vast amounts of gas in the colliding galaxies.”