Scientists at Northumbria University have begun to unlock the mystery of why the outer edge of the Sun is much hotter than its surface for the first time. 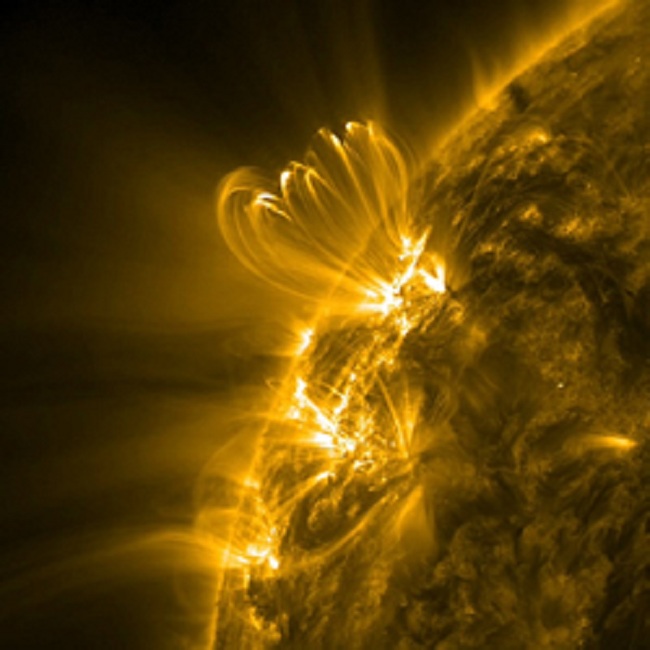 Magnetic loop structures in the corona of the Sun.

A team led by Northumbria’s Dr Richard Morton, and including researchers from the University of Sheffield and Queen’s University Belfast, have used cutting-edge solar-imaging technology to observe the Sun’s chromosphere – a region of the Sun’s atmosphere sandwiched between its surface (photosphere) and outer layer (corona) – to an unprecedented level of detail.

For years astronomers have looked for the elusive mechanism that causes some stars to have a corona that is almost 200 times hotter than their photosphere, despite being further away from the heat source at the star’s core. It is believed that the cause of the increased temperature is due to magnetohydrodynamic (MHD) waves that distribute the energy generated below the star’s surface to the outer layers of the Sun’s atmosphere.

Now, for the first time, the team has examined the MHD waves using a UK-designed dedicated solar-imaging telescope known as Rapid Oscillations in the Solar Atmosphere, or ROSA, to observe the chromosphere with a high degree of clarity.

The powerful tool enabled some of the highest resolution images of the chromosphere to be obtained, allowing the scientists to study the speed and power of the waves and then estimate the amount of energy that they transport.

Their calculations confirm that the MHD waves could be responsible for transporting energy from below the solar surface, out through the chromosphere, into the corona and leading to heating of the outer layers in excess of a million degrees.

Dr Morton said: “The Sun is our closest star and provides a unique opportunity to study the properties of stars in detail. Stars generate heat through thermonuclear reactions in their core and the temperature decreases towards the star’s surface. However, a significant number of stars have higher temperatures at the outer edges of their atmospheres than they do on their surface.

“Our observations have permitted us to estimate the amount of energy transported by the magnetic waves, and these estimates reveal that the waves’ energy meets the energy requirement for the unexplained temperature increase in the corona.”

The team’s findings have been published in Nature Communications, an online journal dedicated to publishing high-quality research in all areas of the biological, physical and chemical sciences. Papers published by the journal represent important advances of significance to specialists within each field.