A research team at Keio University, led by Associate Professor Tomoharu Oka, has discovered intermediate-mass black hole (IMBH) candidates at the center of the Milky Way Galaxy. It is about 30,000 light-years from the solar system in the direction of Sagittarius. IMBH candidates are considered to be the “seeds” that form and grow supermassive black holes. 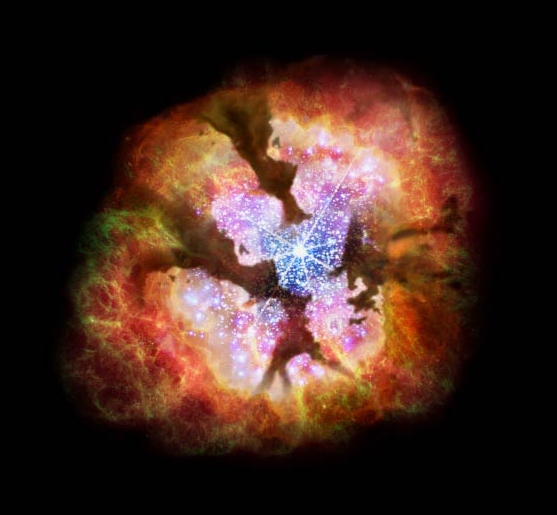 A conceptual image of the newly discovered “large star cluster buried in dust.” It is considered that IMBHs are formed at the center of the cluster. Credit: Keio University

Using radio telescopes, the research team led by Associate Professor Oka has found four “warm, dense (more than 50 degrees Kelvin, more than 10,000 hydrogen molecules per cubic centimeter)” masses of molecular gas at the center of the Milky Way Galaxy. Three of those masses of molecular gas have been expanding. This research suggests that supernova explosions caused the expansion. It is estimated that the largest explosion that occurred in the masses of molecular gas is equivalent to 200 supernova explosions. On the other hand, the age of the gas masses is approximately 60,000 years old. Therefore, it can be inferred that a huge star cluster is buried in one of the gas masses. The mass of the cluster (more than 100,000 times the mass of the sun) is comparable to the largest star cluster found in the Milky Way Galaxy. It is thought that IMBHs are formed within such huge star clusters. Eventually, IMBHs born near the center of the Milky Way Galaxy form/expand into a supermassive black hole at the nucleus of the galaxy.

Many galaxies contain enormous amounts of molecular gas in small areas near their nuclei. Highly condensed molecular gas is a birthplace of lots of stars. Moreover, it is considered to closely relate to activities of galactic nuclei. Therefore, it is important to investigate the physical state and chemical properties of molecular gas at galaxy centers through observation. To obtain detailed observation data, it is best to survey the center of the Milky Way Galaxy in which our Solar System exists.

The research team observed emission lines at wavelengths of 0.87 mm, emitted from carbon monoxide molecules in an area of several degrees that includes the center of the Milky Way Galaxy. The ASTE 10 m telescope in the Atacama Desert (4,800 meters above sea level) of Chile was used for observation. More than 250 hours in total were spent on the prolonged observation from 2005 to 2010.

The research team compared this observation data with data of emission lines at wavelengths of 2.6 mm, emitted from carbon monoxide molecules in the same area, which were obtained using the 45m Telescope at Nobeyama Radio Observatory. When intensity values of emission lines at different wavelengths, emitted from carbon monoxide molecules, are compared, it is possible to estimate temperature and density of molecular gas. In this way, the research team succeeded in drawing detailed distribution maps of  “warm, dense” molecular gas of more than 50 degrees Kelvin and more than 10,000 hydrogen molecules per cubic centimeter at the center of the Milky Way Galaxy for the first time ever.

Oka, the research team leader, said, “The results are astonishing.” The “warm, dense” molecular gas in that area is concentrated in four clumps (Sgr A, L=+1.3°, L=–0.4°, L=–1.2°). Moreover, it turns out that these four gas clumps are all moving at a very fast speed of more than 100 km/s. Sagittarius A, one of the four gas clumps, contains “Sagittarius A*,” the nucleus of the Milky Way Galaxy. Oka added, “The remaining three gas clumps are objects we discovered for the very first time. It is thought that ‘Sagittarius A*’ is the location of a supermassive black hole that is approximately 4 million times the mass of the Sun. It can be inferred that the gas clump ‘Sgr A’ has a disk-shaped structure with radius of 25 light-years and revolves around the supermassive black hole at a very fast speed.”

“We would like to observe IMBHs in the star cluster. Actually, our observation data has already indicated traces of IMBHs,” Oka said. One of the newly discovered gas masses, “L=–0.4°,” contains two small gas clumps moving at a very fast speeds. If it is confirmed that these small gas clumps are rotating, it can be inferred that there are “invisible huge masses” at the center of the gas clumps. These “invisible huge masses” are likely to be IMBHs hidden in the center of the star cluster. Professor Oka expects developments in future research, saying, “In order to confirm the existence of IMBHs, we are planning to conduct further observations. The new discovery is an important step toward unraveling the formation and growth mechanism of the supermassive black hole at the Milky Way Galaxy’s nucleus, which is a top-priority issue in galactic physics.”