Three years ago University of Tennessee, Knoxville, researchers helped to discover water on the surface of the Moon. Now, they are piecing together the origin of that water: solar wind. 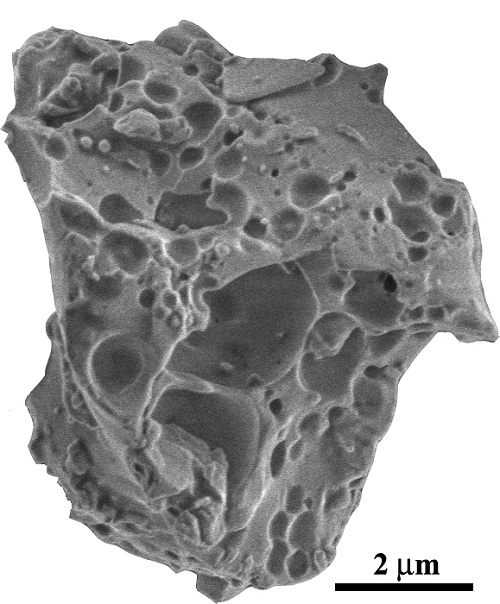 This microscope image shows a grain of agglutinate glass similar to those analyzed in the lunar surface-water study reported in Nature Geoscience. The specimen in this image, which comes from samples returned by Apollo astronauts, is smaller than a typical dust grain. Image Credit: Yang Liu

A new study published in this month’s Nature Geoscience confirms solar wind as a source for water embedded in the lunar surface.

Solar wind is the continuous flow of charged particles from the Sun. Scientists have speculated it to be responsible for water on the surface of the Moon.

Last year Larry Taylor, distinguished professor in the Department of Earth and Planetary Sciences, confirmed comets as the source for water inside the Moon. This year, Yang Liu, research assistant professor, and Taylor have confirmed solar wind as the source for water on the outside—by depositing positively charged hydrogen atoms, or protons, onto its surface, allowing it to combine with the Moon’s oxygen to create water.

“When those protons hit the lunar surface with enough force, they break apart oxygen bonds in soil materials to join together and form water,” said Liu. “This does not happen on Earth because our atmosphere and magnetic field protect us from being bombarded by these protons, but the Moon lacks this protection.”

The researchers used lunar samples from three Apollo missions, including one brought back by Neil Armstrong, analyzing something called an agglutinate. An agglutinate, which resembles “dirty Swiss cheese,” is a unique product of space weathering in the lunar regolith, the crushed materials on the Moon’s surface. The agglutinate was chosen because it consisted of products suspected to contain hydrogen. The researchers used infrared spectroscopy to confirm the presence of hydroxyl (OH). Then they used secondary ion mass spectrometry to obtain the amount of hydroxyl and the origins of the hydrogen.

The researchers discovered that most of the water in the agglutinates came from solar wind. Confirming the solar-wind- induced hydroxyl emphasizes the possibility of finding water on the surface of other similar airless bodies.

“This means water likely exists on Mercury and on the asteroids such as Vesta or Eros further within our Solar System,” said Liu. “These planetary bodies have very different environments, but all have potential to produce water. The finding also implies solar-wind contributes to water ice in lunar poles.”

The research also identifies the largest reservoir for water on the lunar surface since regolith, and thus the corresponding hydroxyl is very widespread. This gives the Moon the potential to serve as a habitat and gas station in the sky.

“The hydroxyl in such a volumetrically large reservoir is a valuable resource,” said Taylor. “With the cost of $25,000 for taking one pint of water to the Moon, water has the potential to be used as rocket fuel as liquid hydrogen or oxygen.”

Liu and Taylor collaborated with researchers from the California Institute of Technology and the University of Michigan on this study.

Source: The University of Tennessee