Dust is an annoyance in everyday life, but an important building block of stars and planets. As such, astronomers need to understand how cosmic dust forms over time — it’s an integral step in figuring out the evolution of galaxies, and the stars and planets within them. 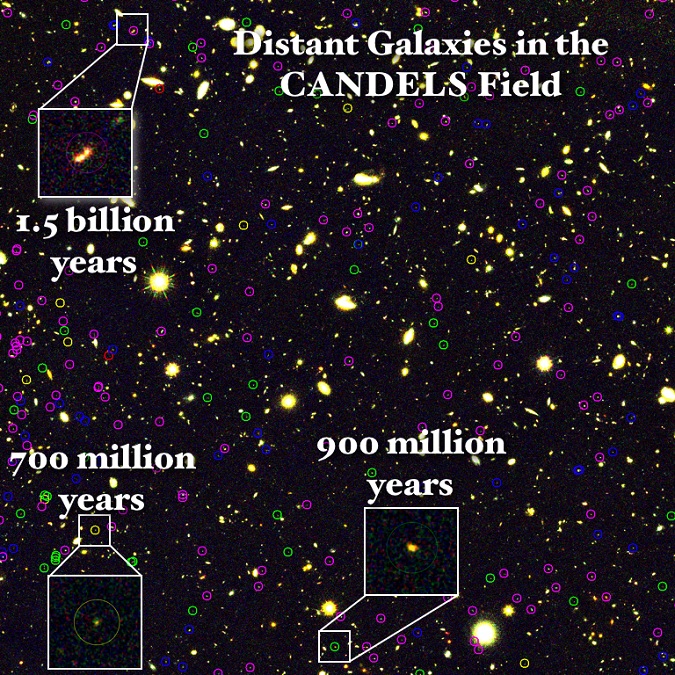 A small portion of one of the CANDELS fields; small circles indicate galaxies included in the survey. Galaxies seen at various distances are circled in colors according to epoch. Galaxies at a redshift of 4, or 1.5 billion years after the Big Bang, are circled in magenta, while galaxies at 5, 6, 7 and 8 are circled in blue, green, yellow and red, respectively. The three insets show a zoomed in view of three galaxies; the upper-left panel is one at a redshift of 4, the lower-right is at a redshift of 6, and the lower-left is at a redshift of 7. This composite image is made up of an optical image (shown in blue) by Hubble Space Telescope as part of the GOODS survey, combined with an infrared Hubble image (red and green) taken in dedicated CANDELS observations. Image Credit: S. Finkelstein/CANDELS Collaboration/STScI/NASA

To better understand cosmic dust, University of Texas at Austin assistant professor Steven Finkelstein and colleagues are pursuing one of the largest Hubble Space Telescope projects to date, studying dust in thousands of galaxies over a wide range of cosmic time. They published some early results in a paper lead by Finkelstein in a recent issue of The Astrophysical Journal.

“We don’t yet understand how galaxies build up their dust reservoirs,” Finkelstein said. “We know that dust builds up through time, but exactly when the formation of dust begins is unknown.”

Finkelstein is part of a large team of astronomers working to rectify that knowledge gap. They are studying nearly 3,000 galaxies seen 500 million to 1,500 million years after the Big Bang — only a moment after the initial event, when compared to the 13.7-billion-year age of the Universe. The project is called CANDELS: the Cosmic Assembly Near-infrared Deep Extragalactic Legacy Survey.

Some of the galaxies came from the team’s own ongoing Hubble observations: more than 900 orbits studying distant galaxies with the Wide Field Camera 3 (WFC3). They also include data from several other large Hubble galaxy surveys (including Great Observatories Origins Deep Survey (GOODS) and the Hubble Ultra-Deep Field survey). The red circles from left to right represent the measured average color of galaxies at a redshift of 4, 5, 6 and 7, where the bottom axis shows the time since the Big Bang. The light blue bar running through the center of the diagram shows the color of the local galaxy NGC 1705, which contains no dust. When CANDELS astronomers saw that the redshift 7 galaxies in their sample have a similar color as NGC 1705, they derived that those are also dust free. The gradual reddening they observed at lower and lower redshifts reveals that the galaxies are getting dustier with time. Image Credit: S. Finkelstein/CANDELS collaboration

Finkelstein said that previous studies with smaller surveys, including some of his own, appeared to indicate that ancient galaxies were dust free. But CANDELS has found that even at a very early epoch, massive galaxies already contain a lot of dust, in the form of grains of carbon and silicon (in astronomical jargon, “heavy metals”).

“We found something we wouldn’t expect,” Finkelstein said. “Although dust can form quickly, I don’t think many people expected galaxies at only 800 million years after the Big Bang to have a lot of dust. These observations caused us to change our thinking.”

Studying such ancient, and thus faint, galaxies is tricky even for Hubble. Only a miniscule amount of information comes through in the tiny stream of photons they send our way, but their color can be determined. This was the team’s quarry. Galaxy colors are a clue to the amount of dust a galaxy contains: The redder a galaxy appears, the more dust it contains. The bluer it appears, the less dust it contains.

And finding a significant amount of “heavy metal” dust in these early massive galaxies means they must have been forming stars for a while, Finkelstein said. That’s because heavy elements were not created in the Big Bang itself. They are built up over time inside stars, as they fuse lighter elements into heavier ones through nuclear fusion at their cores. When a massive star runs through all of this nuclear fuel, it explodes as a spectacular supernova, spewing these heavy elements into the galaxy. These heavy elements are the building blocks for the dust for which CANDELS was looking. Steven Finkelstein is an assistant professor in the Department of Astronomy at The University of Texas at Austin. Image Credit: UT-Austin

“These results are very interesting because they tell us that dust does form at early times,” he said. “This is important because the same elements that compose the dust grains are necessary for the formation of planets. Also, we think that dust is a key component in allowing hydrogen gas to form molecules, which is necessary for star formation.”

Additionally, the team found that in between 800 million and 1.5 billion years after the Big Bang, “all galaxies — not just massive ones — get dusty,” Finkelstein said.

This work has him excited about the future, Finkelstein said. “The presence of dust means that a previous generation of stars has lived and died. So, when we can peer back to even farther later this decade with JWST [the James Webb Space Telescope], there should be a lot for us to see!”

Source: The University of Texas at Austin – McDonald Observatory