Two ‘super-luminous’ supernovae – stellar explosions 10 to 100 times brighter than other supernova types – have been detected in the distant Universe. The discovery, led by Swinburne University of Technology astrophysicist Dr Jeffrey Cooke, and reported online in Nature this week, sets a record for the most distant supernova yet detected. 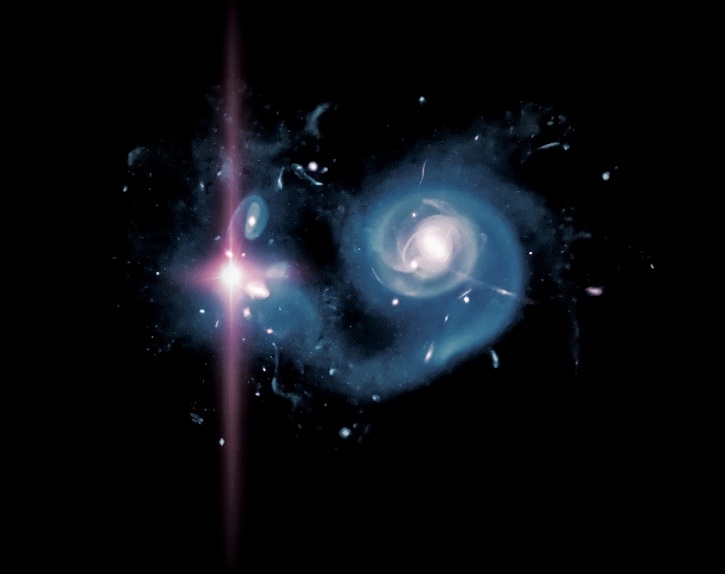 High-resolution simulation of a galaxy hosting a super-luminous supernova and its chaotic environment in the early Universe. Image Credit: Adrian Malec and Marie Martig (Swinburne University)

“The light of these supernovae contains detailed information about the infancy of the Universe, at a time when some of the first stars are still condensing out of the hydrogen and helium formed by the Big Bang,” Dr Cooke said.

Super-luminous supernovae were first discovered only a few years ago and are extremely rare in the nearby Universe.

The origins of super-luminous supernovae are not well understood, but a small subset of them are thought to occur when extremely massive stars, 150 to 250 times more massive than our Sun, undergo a nuclear explosion triggered by the conversion of photons into electron-positron pairs. This process is completely different compared to all other types of supernovae.

Such events are expected to have occurred more frequently in the early Universe, when massive stars were more common.

The expected frequency and the extreme brightness of these events encouraged Dr Cooke and his colleagues to search for super-luminous supernovae at redshifts greater than 2, which corresponds to more than 10 billion years ago when the Universe was less than one-quarter of its present age.

“Our program uses a novel image-stacking technique and monitors tens of thousands of infant galaxies targeted because they are rapidly forming stars, which increased our chances of detecting the supernovae,” Dr Cooke said.

Using the giant Keck telescope in Hawaii, the researchers searched through a large volume of the early Universe and found two super-luminous supernovae, at redshifts 2.05 and 3.90 – breaking the previous ‘normal’ supernova redshift record of 2.36. Swinburne’s investment in Keck Observatory telescope time and supportive research vision made this work possible.

“Other than hydrogen and helium, all elements such as carbon, oxygen, iron, and silicon, were manufactured in the cores of stars or during supernova explosions and ejected by the supernovae into space to cool and form the next generation of stars,” Dr Cooke said.

“The multitude of supernovae over cosmic time enriched the Universe with heavy elements that eventually produced the diverse set of galaxies, stars, and planets we see around us today.”

The present results suggest that detection of the first generation of stars may not be far from our grasp.

“Finding the first generation of stars is the current Holy Grail for astronomers. The distances of our supernovae overlap with the distances where we expect to find the first stars.”

“Our search technique provides the means to detect and study the deaths of the first generation of stars and understand the chemical enrichment process of the Universe from the beginning.”

Supernovae are the brilliant, explosive deaths of stars. For a short time, these explosions can outshine an entire galaxy containing billions of stars.

The explosion of a super-luminous supernovae can emit as much light as our sun will in 10 billion years. Image Credit: Rampant.Gaffer

The recently discovered rare class of supernovae, termed “super-luminous supernovae”, are the most luminous and most energetic of these explosions. They are 10 to 100 times brighter and more powerful than “normal” supernovae.

Such events actually warrant the over-use of superlatives – during their explosion, they emit more light than our Sun will emit over its entire 10 billion year lifetime and even more energy.

As part of the research program searching for supernovae in the early Universe, hundreds of deep images were combined to discover the two super-luminous supernovae in the Canada-France-Hawaii Telescope Legacy Survey – an extremely deep image of a wide area of the night sky that took five years to create.

Using the giant 10-meter Keck telescopes near the summit of Mauna Kea in Hawaii, the researchers confirmed that the supernovae occurred 10 and 12 billion years ago, way back when the universe was only 25% and 10% of its current age, respectively.

Keep in mind that the light from these supernovae travelled towards us that whole time. Light travels at roughly 300,000 kilometers (about 7.5 times around the Earth) every second. In a year, light covers almost 10 trillion kilometers (10,000,000,000,000 km).

Realising that the light from these supernovae had travelled for 10 to 12 billion years gives a real sense of the extreme distances involved.

This particular type of supernova results from the death of a very massive star (about 150 to 250 times the mass of our Sun) and explodes in a completely different way compared to other supernovae.

During the star’s lifetime, gamma ray photons produced by the fusion process in their cores provide radiation pressure support to hold up the outer layers of the star from the crushing force of gravity.

The condition inside these stars evolves and becomes ideal for gamma ray photons to convert into electron-positron particle pairs. The conversion from outward radiation pressure into mass causes the star to collapse on itself from gravity.

This gravitational collapse then results in a runaway thermonuclear explosion that completely obliterates the star.

Pair-instability supernovae are thought to have occurred more often in the early Universe and interestingly, one, if not both, of our super-luminous supernovae appear to be this type of event.

In the early Universe, many galaxies were physically quite small but vigorously forming stars. The enormous energy of a single super-luminous supernova could disrupt a significant fraction of such a galaxy and, in some cases, cause the star-formation process to come to a halt.

But, interestingly, the material that is blown off supernovae in larger galaxies (which survive such an event) provides the seeds for the next generation of stars. Furthermore, the shock wave from the explosions can help to compress gas in those galaxies to accelerate the star-formation process.

Shortly after the Big Bang, only hydrogen, helium and trace amounts of lithium existed in the Universe. All the other elements that we see around us today, such as carbon, oxygen, iron, and silicon, are manufactured in the cores of stars or during supernova explosions.

The first generation of stars born after the Big Bang was formed from this pristine gas which is believed to have generated a large fraction of very massive stars.

The supernova deaths of the first stars polluted the Universe with heavier elements that subsequently cooled and condensed and formed the next generations of stars, including the sun’s generation. Thus, the first generation was truly unique.

Those heavy elements that “polluted” the Universe (carbon, oxygen, iron etc.) make up Earth, you, puppies, iPhones and the sandwich you’ve got for lunch today. All those atoms were once inside a star.

The first stars laid the framework for the long process of polluting the Universe that eventually produced the diverse set of galaxies, stars, and planets we see around us today.

The theory goes that regions of the Universe with clouds of pristine gas survived until as recently as 10 billion years ago. In addition, two such gas clouds capable of forming first generation stars have been observed to exist.

So, for the first time, astronomers are able to observe supernovae at times that overlap with the times they expect to find the first generation of stars. These discoveries mean that they now have the means to investigate the star-formation process from the beginning.

From analysing the spectroscopy (the intensity of light at different wavelengths from an object in which the unique signature of the elements can be seen), the two super-luminous supernovae that were found are unlikely to have formed from pristine gas and hence were not the deaths of the first stars.

But, as more supernovae are detected in the early Universe using this technique, discovering the deaths of the first stars will not only be possible, but entirely likely.