Type Ia supernovae are violent stellar explosions. Observations of their brightness are used to determine distances in the universe and have shown scientists that the cosmos is expanding at an accelerating rate. But there is still too little known about the specifics of the processes by which these supernovae form. New research, led by Stella Kafka of the Carnegie Institution for Science in the United States, identifies a star system, prior to explosion, which will possibly become a type Ia supernova. The work will appear in the journal Monthly Notices of the Royal Astronomical Society. 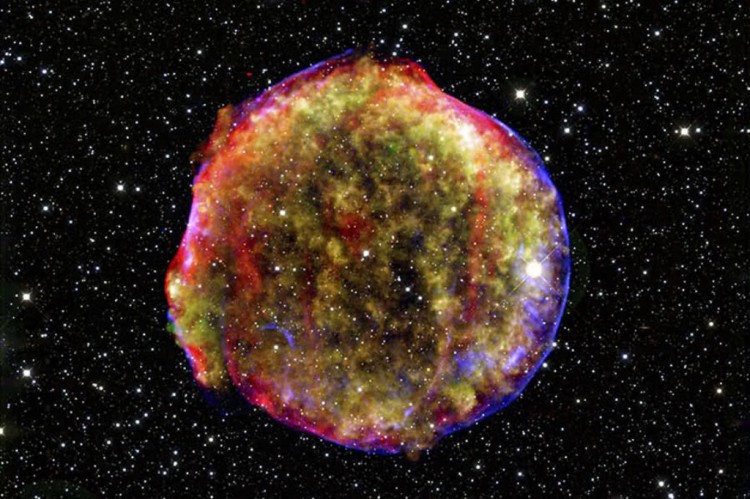 The widely accepted theory is that type Ia supernovae are thermonuclear explosions of a white dwarf star that’s part of a binary system—two stars that are physically close and orbit around a common centre of mass. The white dwarf has mass gradually donated to it by its companion. When the white dwarf mass eventually reaches 1.4 times that of the sun, it explodes to produce a type Ia supernova. The crucial questions are: What is the nature of the donor star and how does this white dwarf increase its mass. Also, how would that process affect the properties of the explosion?

With these questions in mind, scientists have been searching for candidate systems that could become type Ia supernovae. There are thousands of possibilities in the candidate pool, none of which have yet been observed to produce an explosion. Recent studies, some of which involved scientists at Carnegie observatories, have identified sodium gas associated with type Ia supernovae. This gas might be ejected from the binary’s donor star and linger around the system to be detected after the white dwarf explodes. This provides a clue to the progenitor. Even so, Kafka still compared the search to “looking for a needle in a stellar haystack.”

Using data from the DuPont telescope of the Las Campanas observatory in Chile, Kafka and her team—Kent Honeycutt of Indiana University and Bob Williams of the Space Telescope Science Institute— looked at these gas signatures and were able to identify a binary star called QU Carinae as a possible supernova progenitor. It contains a white dwarf, which is accumulating mass from a giant star, and sodium has been detected around the system.

This star belongs to a small category of binaries that are very bright and in which the white dwarf accretes material from its companion at very high rates. Sodium should be produced in the atmosphere of the mass-donor giant star, and it can be ejected from the system via a stellar wind. If the white dwarf of this binary explodes into a supernova, the sodium would be detected with the same sort of signature as those found in other type Ia supernovae.

“We are really excited to have identified such a system,” Kafka said. “Understanding these systems, the nature of the two stars, the manner in which mass is exchanged, and their long-term evolution will give us a comprehensive picture on how binaries can create one of the most important explosions in the Universe.”