Gamma-ray observations of a supernova remnant interacting with a molecular cloud in the outskirts of our Galaxy highlights the interplay of particle physics and particle astrophysics.

In the cosmos we see many examples of particle physics at work on scales that cannot be achieved in manmade, Earth-bound laboratories. One such environment are supernova remnants, the expanding clouds of material flung outward from a supernovae that exploded in the past. These flows give rise to the super-accelerated galactic cosmic rays that we are bombarded with on Earth and whose interactions fill the Galaxy with diffuse radio synchrotron radiation.

Supernova remnants always accelerate more particles than our laboratories on Earth could dream of, but sometimes they are also smashing them directly into high density targets in the form of large molecular clouds. What constitutes high density is relative when one is talking about space – molecular clouds are regions that are dense relative to the rest of interstellar space, containing about half the gas mass of our Galaxy in only one percent of its total volume. They contain lots of hydrogen and other molecules which accelerated particles can smash into, and just like in supercolliders on Earth, when high energy particles smash into something, dramatic things can happen.

One such occurrence of a supernova remnant smashing particles into a molecular cloud is happening in a region called SNR S147, located outward from our position in the Galaxy and at a relatively close distance of approximately 3000 light-years. A group of scientists from KIPAC, joined by four colleagues from France and Japan, have undertaken an analysis of gamma-ray and other observations of SNR S147 in order to learn more about particle acceleration and interaction in supernova remnants. The gamma-ray data is from the Fermi Gamma-ray Space Telescope’s Large Area Telescope (LAT), which was built at SLAC and in which KIPAC is a lead science institution. 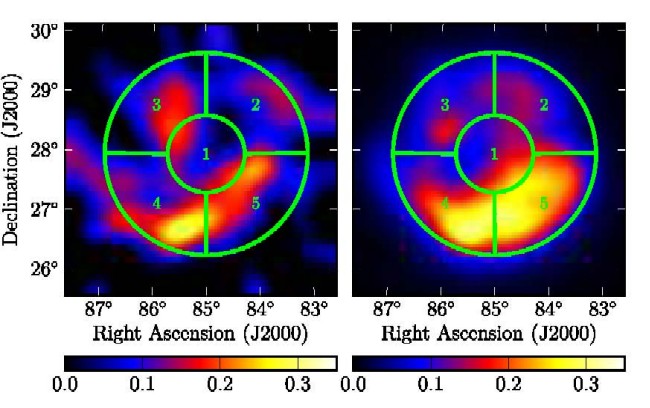 The left panel shows the gamma-ray emission from SNR S147 as seen by the Fermi-LAT, while the right panel shows emission for a Hydrogen line transmission in optical light. The numbered regions are to aid in comparison.

In a recent paper, the scientists report that the gamma-rays from SNR S147, upon considering details of their energy spectrum and spatial distribution as seen by Fermi, seem to come from the decay of neutral pions, which themselves are produced by the high energy collisions of two protons, much as in particle physics experiments. In this case the accelerated protons from the supernova remnant are colliding with those of relatively slow hydrogen atoms in the molecular cloud. One important clue is that the spatial distribution of the gamma-ray emission seems to trace that of optical emission at a certain wavelength due to the a transition in neutral atomic hydrogen. The gamma-ray emission is most intense where there are the most hydrogen atom targets. Such a phenomenon was predicted by Yasunobu Uchiyama (postdoctoral scientist from KIPAC, also a participant in this new study) and others a year ago in a paper in which they described the “crushed cloud model” of gamma-ray emission from supernova remnants. These results highlight how gamma-ray observations from Fermi are continuing to provide valuable data for understanding particle astrophysics and the high energy physics of the cosmos.

This work is described in a paper to be published in the Astrophysical Journal and available from astro-ph at arXiv:1204.4703.