The exploding stars known as Type Ia supernovae serve an important role in measuring the universe, and were used to discover the existence of dark energy. They’re bright enough to see across large distances, and similar enough to act as a “standard candle” – an object of known luminosity. The 2011 Nobel Prize in Physics was awarded for the discovery of the accelerating universe using Type Ia supernovae. However, an embarrassing fact is that astronomers still don’t know what star systems make Type Ia supernovae. 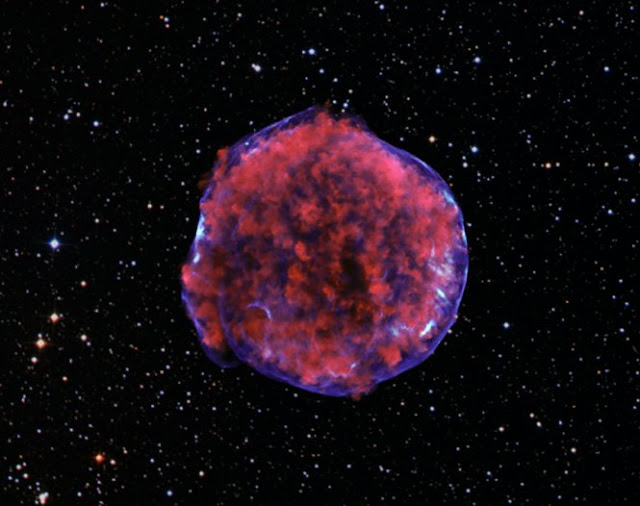 The Tycho supernova remnant is the result of a Type Ia supernova explosion. The explosion was observed by Danish astronomer Tycho Brahe in 1572. More than 400 years later, the ejecta from that explosion has expanded to fill a bubble 55 light-years across. In this image, low-energy X-rays (red) show expanding debris from the supernova explosion and high energy X-rays (blue) show the blast wave – a shell of extremely energetic electrons.
Credit: X-ray: NASA/CXC/Rutgers/K.Eriksen et al.; Optical: DSS

Two very different models explain the possible origin of Type Ia supernovae, and different studies support each model. New evidence shows that both models are correct – some of these supernovae are created one way and some the other.

“Just like mineral water can be with or without gas, so can supernovae,” said Robert Kirshner, Clowes Professor of Astronomy at Harvard University and a co-author on the study.

“There are definitely two kinds of environments – with and without outflows of gas. Both are found around Type Ia supernovae,” Foley said.

This finding has important implications for measurements of dark energy and the expanding universe. If two different mechanisms are at work in Type Ia supernovae, then the two types must be considered separately when calculating cosmic distances and expansion rates.

“It’s like measuring the universe with a mix of yardsticks and meter sticks – you’ll get about the same answer, but not quite. To get an accurate answer, you need to separate the yardsticks from the meter sticks,” Foley explained.

This study raises an interesting question – if two different mechanisms create Type Ia supernovae, why are they homogeneous enough to serve as standard candles?

“How can supernovae coming from different systems look so similar? I don’t have the answer for that,” said Foley.

The paper describing this research will appear in the Astrophysical Journal and is available online.