Almost one in five exploding stars in nearby galaxies is simply not seen, astronomers have determined. For galaxies further out, that fraction doubles. This finding clears the way for these stellar beacons to be used as a good measure of how fast galaxies made stars earlier in the Universe’s history. Key evidence for this “body count” of missing supernovae came from detailed studies of the galaxy Arp 299, made with the 8.2-m Gemini North telescope. 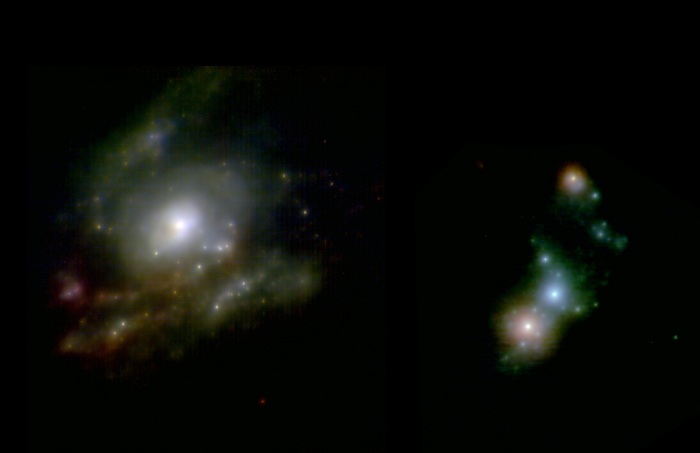 The work is reported in a paper, “Core-Collapse Supernovae Missed by Optical Surveys”, published online in the Astrophysical Journal by a team including Dr Stuart Ryder of the Australian Astronomical Observatory.

Massive stars live fast and die young, going out in a blaze of glory as “core-collapse supernovae”.

“Because they don’t live long, only about 10 million years, the number of massive stars that we can see being born should be essentially identical to the number we see exploding,” said the paper’s lead author, Dr Seppo Mattila of the University of Turku in Finland. “The trouble has been, lots of these supernovae just seemed to have gone missing,” he said. “We expected to see more.”

Our own Milky Way Galaxy is a case in point.

Two to three supernovae should explode in our Galaxy every century. But the last time anyone might—just might—have seen one directly was in 1680. In 2008, however, NASA’s Chandra X-ray Observatory and the Very Large Array radio telescope of the US National Radio Astronomy Observatory found a supernova remnant about 140 years old near the centre of our Galaxy.

“That’s where the supernovae are mostly hiding—in the dusty central parts of galaxies,” said the AAO’s Dr Stuart Ryder. “That’s where most stars in a galaxy congregate, and where most of them die.”

Because these regions are dusty and crowded, supernovae and their remnants can only be excavated from them with high-resolution observations — observations made with space telescopes, radio interferometers, or adaptive-optics systems on ground-based telescopes that observe in the near-infrared, and which can produce images as sharp as can the Hubble Space Telescope. 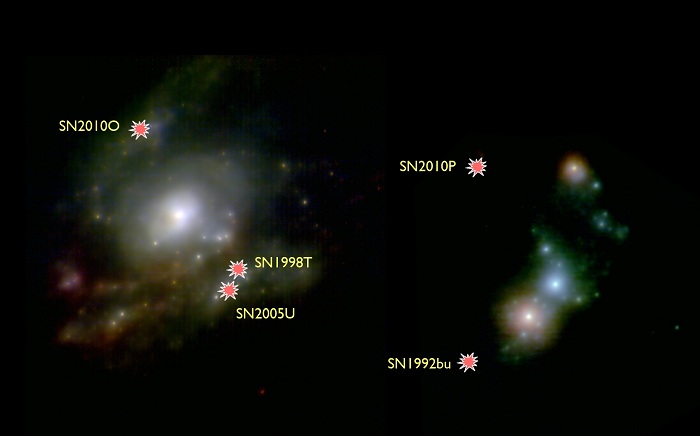 To calculate galaxies’ “supernova budgets”, Dr Mattila’s team drew upon recent discoveries of supernovae made by other researchers, plus their own observations made with the 4.2-m William Herschel Telescope, the 2.6-m Nordic Optical Telescope, and the 8.2-m Gemini North Telescope.

The team considered core-collapse supernovae in two kinds of galaxies: those that are heavily obscured by dust but are otherwise “normal”, and the so-called luminous and ultraluminous infrared galaxies (known respectively as LIRGs and ULIRGs).

In the nearby Universe, most of the star-formation goes on in “normal” galaxies, while at higher redshifts (z ~ 1-2, corresponding to seven to ten billion years ago in the history of the Universe) most of it occurs in LIRGs and ULIRGs.

The galaxy Arp 299 is one of the best-studied examples of a LIRG and, lying 150 million light-years away, it is also one of the closest. Dr Mattila’s team drew on previous searches for supernovae in this galaxy and also conducted their own, in the process discovering one new supernova (SN2010P) and confirming another (SN2010O).

For both “normal” galaxies and Arp 299, the team compared the numbers of detected supernovae with the numbers predicted on the basis of both radio and far-infrared luminosities. From this they estimated what fraction of core-collapse supernovae must have been missed.

The team’s figures? Optical surveys miss about 20% of core-collapse supernova in “normal” galaxies and up to a whopping 80% in LIRGs and ULIRGs, they say.

Dr Ryder stresses that there are “small number statistics” involved. “Our estimates have significant uncertainties attached to them,” he said. “A new Australian-built adaptive optics camera on the Gemini South telescope, coming on-stream soon, will enable us to discover many more supernovae, and to refine these estimates.”

“But right now, for the first time we have a figure for total number of core-collapse supernovae in the nearby Universe that matches well with the star-formation rate. So we’re on the right track.”