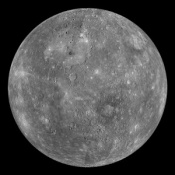 Spacecraft concludes primary mission, looks toward second year at innermost planet click to enlarge   MESSENGER completed its one-year primary mission on March 17. Since moving into orbit about Mercury a little over one year ago, the spacecraft has captured nearly 100,000 images and returned data that have revealed new information about the planet, including [continue reading]