The scientists and engineers of NASA’s Curiosity rover mission have selected the first driving destination for their one-ton, six-wheeled mobile Mars laboratory. The target area, named Glenelg, is a natural intersection of three kinds of terrain. The choice was described by Curiosity Project Scientist John Grotzinger of the California Institute of Technology during a [continue reading] 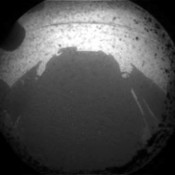 NASA’s most advanced Mars rover Curiosity has landed on the Red Planet. The one-ton rover, hanging by ropes from a rocket backpack, touched down onto Mars today to end a 36-week flight and begin a two-year investigation. This is one of the first images taken by NASA’s rover, Curiosity. Taken with the rover’s Hazcam [continue reading]

A researcher at The Open University in the UK will take part in a mission to explore the chemistry of Mars when Curiosity lands on the planet. The area where NASA’s Curiosity rover will land has a geological diversity that scientists are eager to investigate, as seen in this false-color map based on data from NASA’s [continue reading]