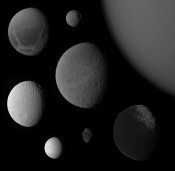 Among the oddities of the outer Solar System are the middle-sized moons of Saturn, a half-dozen icy bodies dwarfed by Saturn’s massive moon Titan. According to a new model for the origin of the Saturn system, these middle-sized moons were spawned during giant impacts in which several major satellites merged to form Titan. Saturn’s [continue reading]