Clumpy particles in Saturn’s B-ring provide stark contrast to the delicately ordered ringlets seen in the rest of this view presented by the Cassini spacecraft. Saturn’s B-ring is the largest and brightest of the gas giant’s rings, the outer portion of which is seen in the left side of this image. 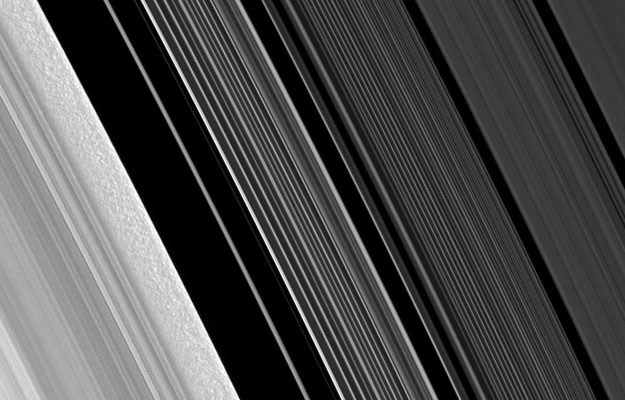 Ring clumps and strands in Saturn’s B-ring as shown by the Cassini spacecraft.

The ring’s outside edge is influenced by meddling moon Mimas, which orbits the planet once for every two circuits the icy ring particles complete.

These periodic gravity perturbations are thought to compress the ring particles into clumps, while maintaining the ring’s well-defined outer edge.

Beyond the B-ring lies the Huygens gap, the widest dark void visible in this image, punctuated only by the bright Huygens ringlet. The 4800 km-wide Cassini Division separates the B-ring from the outermost A-ring, but itself is marked out with faint, concentric strands of ring material.

From Earth, the Cassini Division appears as a thin black gap in Saturn’s rings, but close-up views from spacecraft expose the delicate structures in fine detail.

This image was taken in visible light with the Cassini spacecraft narrow-angle camera on 10 July 2009 from a distance of 320 000 km from Saturn.

Cassini is a joint mission between ESA, NASA and ASI and has been in orbit around Saturn since 2004. It is now in its second extended mission phase, the Cassini Solstice Mission, which will continue until 2017.