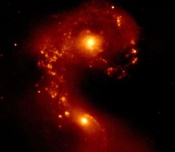 Engineers and astronomers are celebrating the much anticipated first light of the MOSFIRE instrument, now installed on the Keck I telescope at W. M. Keck Observatory. MOSFIRE (Multi-Object Spectrometer For Infra-Red Exploration) will vastly increase the data gathering power of what is already the world’s most productive ground-based observatory. First light with MOSFIRE, and unprocessed [continue reading]

SYNOPSIS • A much anticipated new scientific instrument arrived on Feb. 16 at the Keck I telescope near the summit of Mauna Kea. • The new instrument, called MOSFIRE, is 25 times more light-sensitive than others of its kind and can observe vastly more cosmic objects on any given night. • By mating MOSFIRE with [continue reading]