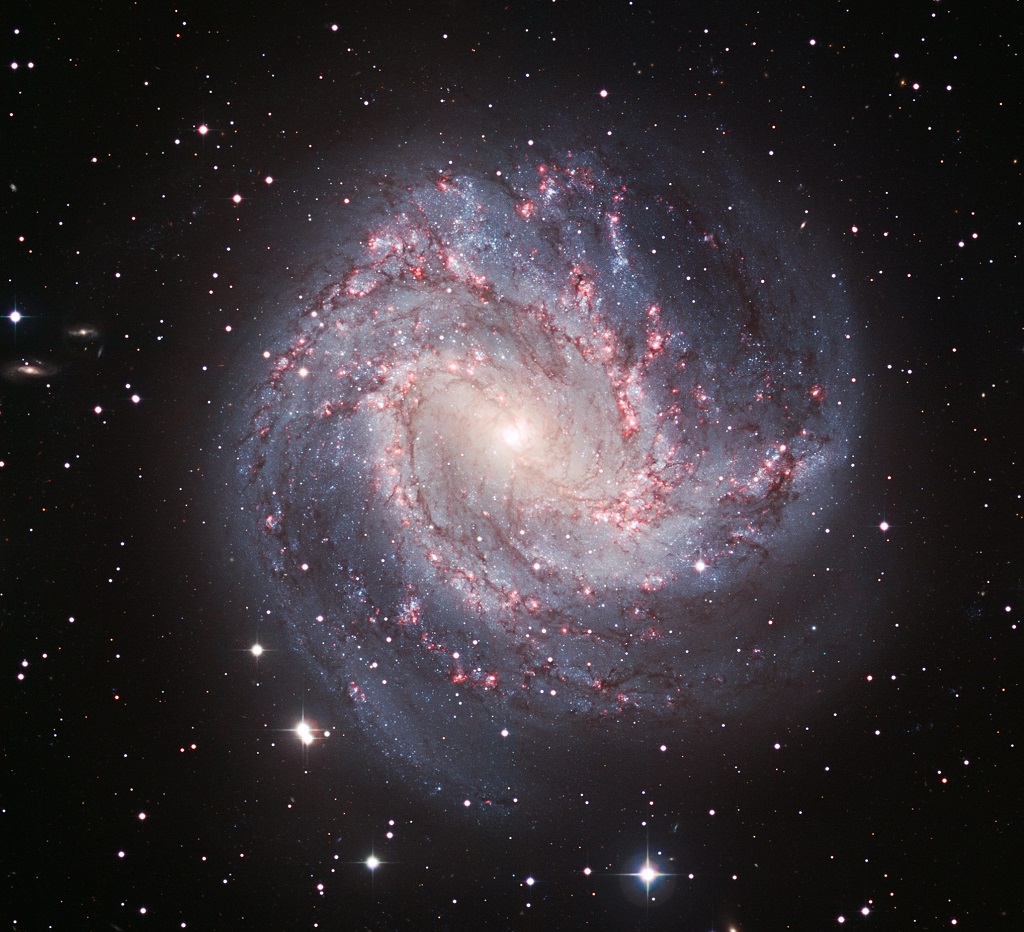 Messier 83 (also known as NGC 5236 and the Southern Pinwheel for its majestic spiral arms) is a barred spiral galaxy of some 40,000 light-years across, located about 14.7 million light-years away in the southern constellation of Hydra, the Water-Snake, while it is receding from us at roughly 513 kilometers per second. It is the central member of the M83 Group, a small nearby group of galaxies, including NGC 5253 and about 9 dwarf galaxies.

Despite its symmetric appearance, the central 1000 light-years of the galaxy shows an unusually high level of complexity, containing both a double nucleus and a double circumnuclear starburst ring. High resolution observations at radio wavelengths show the visible nucleus to be curiously offset from the true dynamical nucleus by some 200 light years. A gaseous accretion disk was found with a diameter of almost 400 light-years rotating at high velocity (180 kilometers per second) around the galaxy’s off centered nucleus.

The nature of the double nucleus is uncertain but some evidence suggests that the origin of the off centered nucleus may be a remnant core of a small galaxy that merged with Messier 83 in its distant past. Supporting this theory is other evidence (a 100,000 light year stellar arc) that Messier 83 recently cannibalized a small satellite galaxy.

The image reveals in unprecedented detail the current rapid rate of star birth in this famous grand design spiral galaxy. The newest generations of stars are forming largely in clusters on the edges of the dark dust lanes, the backbone of the spiral arms. These fledgling stars, only a few million years old, are bursting out of their dusty cocoons and producing bubbles of reddish glowing hydrogen gas.

Gradually, the young stars’ fierce winds (streams of charged particles) blow away the gas, revealing bright blue star clusters. These stars are about 1 million to 10 million years old. The older populations of stars are not as blue.

A bar of stars, gas, and dust slicing across the core of the galaxy may be instigating most of the star birth in the galaxy’s core. The bar funnels material to the galaxy’s center, where the most active star formation is taking place. The brightest star clusters reside along an arc near the core.

The remains of about 60 supernova explosions, the deaths of massive stars, can be seen in the image. Among them are six supernovae (SN 1923A, SN 1945B, SN 1950B, SN 1957D, SN 1968L and SN 1983N) which have been observed in the past century. By studying these remnants, astronomers can better understand the nature of the progenitor stars, which are responsible for the creation and dispersal of most of the galaxy’s heavy elements.

This image is taken by the European Southern Observatory’s Wide Field Imager on the ESO/MPG 2.2-meter telescope at La Silla, Chile.