Peering deep into the dim edges of the distorted Pinwheel Galaxy in the constellation Ursa Major (the Great Bear), astronomers at Case Western Reserve University and their colleagues have discovered a faint dwarf galaxy and another possible young dwarf caught before it had a chance to form any stars. 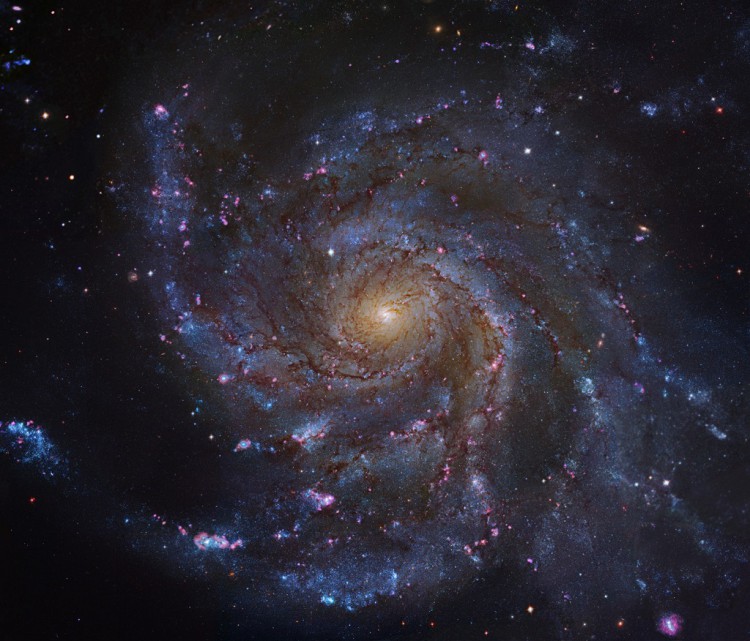 Within the faint trails of intergalactic traffic, the researchers also found more evidence pointing to two already known dwarf galaxies as probable forces that pulled the pinwheel-shaped disk galaxy known as The Pinwheel Galaxy (Messier 101) out of shape.

Their efforts, which required the researchers to discern starlight 100 times fainter than the black of the dark night sky and trace extremely low concentrations of interstellar gases among the celestial bodies, are reported in two papers published in the Astrophysical Journal.

“We created the deepest image ever taken of the Pinwheel Galaxy and followed it up with the most sensitive survey of gas clouds surrounding the galaxy,” said Chris Mihos, an astronomy professor at Case Western Reserve and lead author of both papers. “Compared to what is seen in the Hubble Space Telescope image, the galaxy’s disk is much larger and we can see very large, faint plumes of stars and streamers of gas in its outskirts.”

Perhaps most surprisingly, the researchers discovered two new clouds of hydrogen gas in the M101 group, more distant and distinct from the Pinwheel Galaxy’s own supply of gas. The gas clouds, formally named G1425+5235 and G1355+5439, were nicknamed Skipper and Gilligan by the team, and identified as new dwarf galaxies in the group, independent from M101 itself. A follow-up analysis of images from the Sloan Digital Sky Survey showed a faint patch of starlight associated with Skipper, confirming its status as a true dwarf galaxy with a population of both gas and stars.

But the same analysis found no stars inside Gilligan. Gilligan could be a proto dwarf-galaxy, Mihos said, where the density of gas inside the cloud was too low for gravity to squeeze the gas down and form stars. “We’ll follow up. There’s a gas cloud but no stars yet. People have seen a few starless clouds before, but they’ve always been associated with gas from a larger galaxy. This is different – it has nothing to link it to the other galaxies in the group. It may be one of the first true protogalaxies ever discovered.”

As galaxies move within galaxy groups, they may sideswipe one another or even run into each other head-on. These intergalactic traffic jams leave behind telltale signatures in the galaxies’ stars and gas. In the faint light around the Pinwheel Galaxy, the researchers discovered such evidence of a sideswipe in the galaxy’s past: a distorted plume of starlight reaching far to the northeast of the galaxy, and a second plume extending to the east.

The shapes and colors of the plumes suggest that they formed when a small galaxy passed by the Pinwheel Galaxy, and its gravity tugged stars and gas out from the bigger galaxy.

“The eastern spur is redder, which is what you expect from an older set of stars. We think, unlike the blue plume of new stars, the eastern spur formed when stars from the older, inner part of the disk were pulled out during the encounter.”

Analysis of position and motion of gas around the Pinwheel Galaxy suggests that the nearby galaxy NGC 5474 was the one that recently interacted with the Pinwheel Galaxy. The two galaxies appear to be linked by a stream of gas pulled out from one or both galaxies during the interaction.

The plume of red stars may also have been formed during this interaction, from older stars pulled from the Pinwheel Galaxy’s inner disk, the researchers conclude. Or, another nearby dwarf galaxy, NGC 5477, may have acted alone or in concert with NGC 5474 to draw material from the inner disk.

To do the optical survey, they relied on Case Western Reserve’s revamped 72-year-old Burrell Schmidt wide field telescope, located at Kitt Peak National Observatory near Tucson, Ariz. The team then used the Robert C. Byrd Green Bank Telescope at the National Radio Astronomy Observatory in Green Bank, W.Va. to perform the most sensitive survey ever of neutral hydrogen gas – the fuel for forming new stars and galaxies – around the Pinwheel Galaxy.

To see the incredibly faint light from the Pinwheel Galaxy’s outer disk required a series of changes to the Burrell Schmidt telescope. “We’re looking at signals buried in the noise; the noise here is scattered and stray light,” said Paul Harding, Case Western Reserve’s observatory manager. Harding, Associate Astronomer Charlie Knox and the rest of the CWRU team reconfigured the telescope, replacing the secondary mirror with a larger version, but moving it farther from the primary mirror. The results: a wider field of view—nine moons can fit in the view—without significantly increasing the amount of light obstructed by the secondary mirror.

They then treated the optical surfaces of the telescope’s camera with an anti-reflective coating and lined the inside of the telescope with black velvet, further reducing scattered and stray light.

To test whether Gilligan is a protogalaxy, Mihos said they hope to use the Very Large Array telescope at the National Radio Astronomical Observatory in the desert southwest of Albuquerque, N.M., to map out the gas in more detail, compare it to known dwarf galaxies, and determine if it’s getting ready to form stars.

If, however, this gas cloud is a protogalaxy, it may not begin forming stars for millions or billions of years to come.