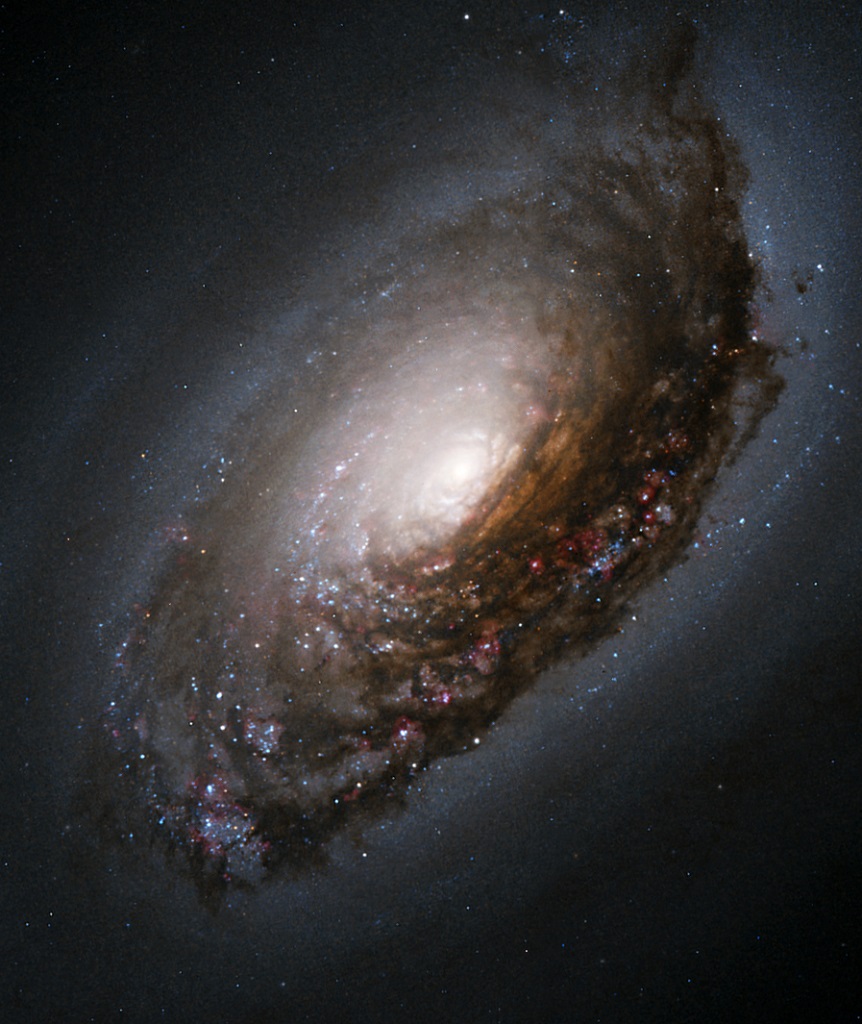 Messier 64 (also known as NGC 4826, the Black Eye Galaxy, Sleeping Beauty Galaxy or Evil Eye Galaxy) is a spiral galaxy of about 51,000 light-years across, located roughly 17 million light-years away in the northern constellation of Coma Berenices (Berenice’s Hair), while it is receding from us at approximately 408 kilometers per second. It is a member of the small group of galaxies known as the Canes Venatici I Cloud or M94 group.

It has gotten its nicknames for the spectacular dark band of dust in front of one side of the galaxy’s bright nucleus, obscuring the stars behind.

At first glance, Messier 64 seems to be a fairly normal pinwheel-shaped spiral galaxy. As in the majority of galaxies, all of the stars in Messier 64 are orbiting in the same direction, clockwise as seen in this image.

However, recent detailed studies have led to the remarkable discovery that Messier 64 has two counter-rotating systems of stars and gas in its disk: an inner zone, about 3,000 light-years in radius, that rubs along the inner edge of an outer disk, which rotates in the opposite direction at about 300 kilometer per second. This rubbing may explain the vigorous burst of star formation that is currently taking place in the galaxy and is visible as blue knots embedded in the huge dust lane.

Astronomers believe that the oppositely rotating stars and gas arose when Messier 64 absorbed a satellite galaxy that collided with it, more than one billion years ago. Active formation of new stars is occurring in the shear region where the oppositely rotating gases collide, are compressed, and contract. So, a collision of two galaxies has left a merged star system with an unusual appearance as well as bizarre internal motions.

Particularly noticeable in this image are hot, blue young stars that have just formed, along with pink clouds of glowing hydrogen gas that fluoresce when exposed to ultraviolet light from newly formed stars. The small galaxy that impinged on its neighbor has now been almost completely destroyed, while its stars have either entered the main galaxy or scattered into intergalactic space, but signs of the collision persist in the backward motion of gas at the outer edge of Messier 64.

Oddly enough, no supernovae have been recorded in this galaxy up to now.

This image of the central part of Messier 64 is taken in 2001 with the Wide Field Planetary Camera 2 onboard the Hubble Space Telescope using four different color filters (including infrared).