The Hourglass Nebula, a planetary nebula in Musca 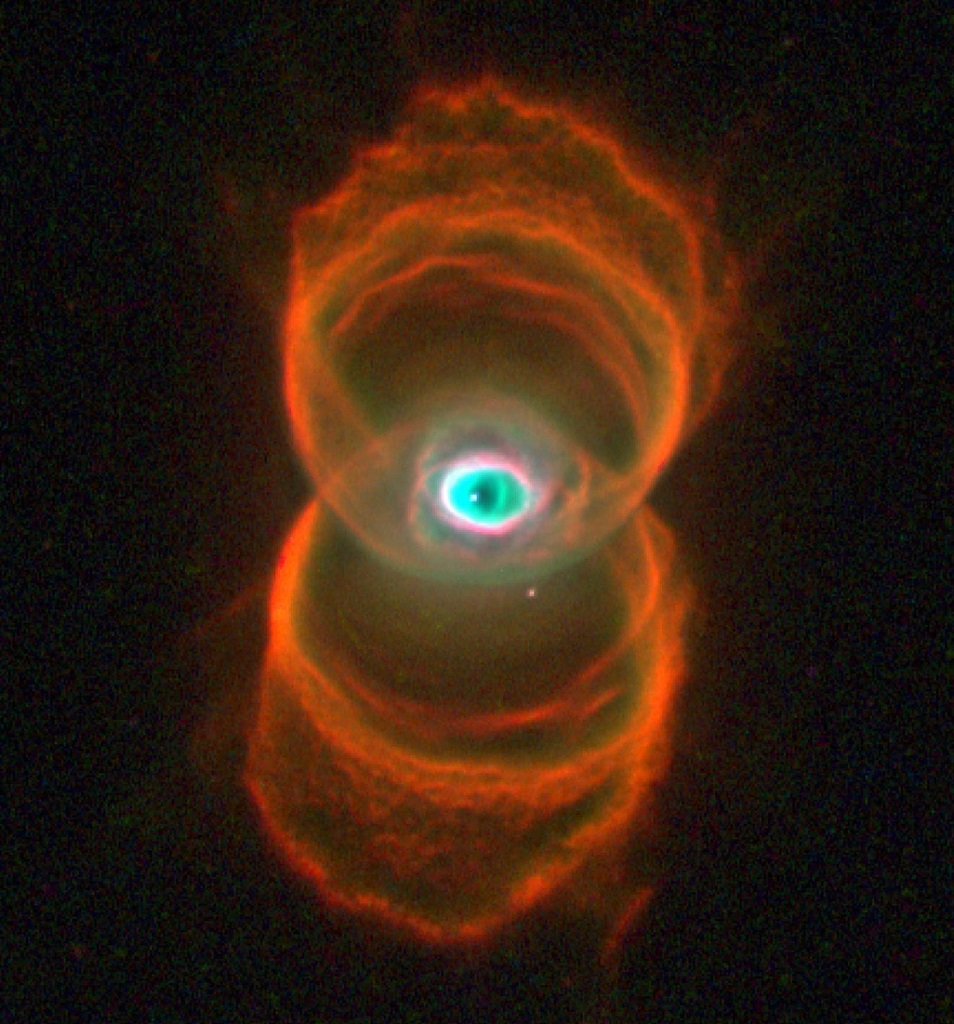 The Hourglass Nebula (also known as the Engraved Hourglass or Etched Hourglass Nebula, and designated MyCn18) is a young planetary nebula located some 8,000 light-years away from Earth in the southern constellation of Musca. It is approaching us at approximately 67.8 kilometers per second.

When a star with a mass up to eight times that of the Sun runs out of fuel at the end of its life, it becomes a red giant, blows off its outer shells and begins to lose mass. This allows the hot, inner core of the star (collapsing from a red giant to a white dwarf) to radiate strongly, causing this outward-moving cocoon of gas to glow brightly.

Over the next several thousand years, the nebula will gradually disperse into space, and then the white dwarf will cool and fade away for billions of years. Our own Sun is expected to undergo a similar fate, but fortunately this will not occur until some 5 billion years from now.

Delicate rings of glowing gas (nitrogen-red, hydrogen-green, and oxygen-blue) outline the tenuous walls of the Hourglass Nebula, which show intricate patterns of “etchings”. This sharp image reveals details of the nebula ejection process that are helping to resolve the mysteries of the complex shapes and symmetries of planetary nebulas. It also sheds new light on the poorly understood ejection of stellar matter which accompanies the slow death of Sun-like stars.

According to the theory for the formation of planetary nebulae, the hourglass shape is produced by the expansion of a fast stellar wind within a slowly expanding cloud which is more dense near its equator than near its poles. The bright elliptical ring in the center is a potato shaped structure with a symmetry axis dramatically different from that of the larger hourglass. The hot star – in the process of becoming a cooling, fading white dwarf – which has been thought to eject and illuminate the nebula, and therefore expected to lie at its center, is clearly off center. Hence the Hourglass Nebula does not fulfill some crucial theoretical expectations.

Other features in the Hourglass Nebula are also completely unexpected. For example, there is a pair of intersecting elliptical rings in the central region which appear to be the rims of a smaller hourglass. The arc-like etchings on the hourglass walls could be the remnants of discrete shells ejected from the star when it was younger, or could result from the action of a narrow beam of matter impinging on the hourglass walls. An unseen companion star and accompanying gravitational effects may explain the structure of the Hourglass Nebula.

This image has been composed from three separate images taken in the light of ionized nitrogen (represented by red), hydrogen (green), and doubly-ionized oxygen (blue), taken with the Wide Field and Planetary Camera 2 aboard the Hubble Space Telescope.