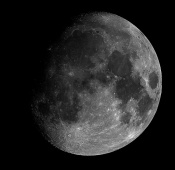 For the past 8 years, NASA astronomers have been monitoring the Moon for signs of explosions caused by meteoroids hitting the lunar surface. “Lunar meteor showers” have turned out to be more common than anyone expected, with hundreds of detectable impacts occurring every year. They’ve just seen the biggest explosion in the history of the [continue reading]

Water is perhaps the most important molecule in our Solar System. Figuring out where it came from and how it was distributed within and among the planets can help scientists understand how planets formed and evolved. New research from a team including Carnegie’s Erik Hauri demonstrates that water from the interiors of the Earth [continue reading]

Large impacts on the Moon can form wide craters and turn surface rock liquid. Geophysicists once assumed that liquid rock would be homogenous when it cooled. Now researchers have found  evidence that pre-existing mineralogy can survive impact melt.    Pre-existing mineral deposits on the Moon (sinuous melt, above) survived impacts powerful enough to melt [continue reading]

The asteroid Vesta, and perhaps other large asteroids, have more in common with Earth’s Moon than previously thought, according to a team of researchers from the NASA Lunar Science Institute (NLSI). Both Vesta and the Moon appear to have been bombarded by the same population of high-speed projectiles four billion years ago. Scientists have [continue reading]

Traces of water have been detected within the crystalline structure of mineral samples from the lunar highland upper crust obtained during the Apollo missions, according to a University of Michigan researcher and his colleagues. Called the “Genesis Rock,” this lunar sample of unbrecciated anorthosite collected during the Apollo 15 mission was thought to be [continue reading]