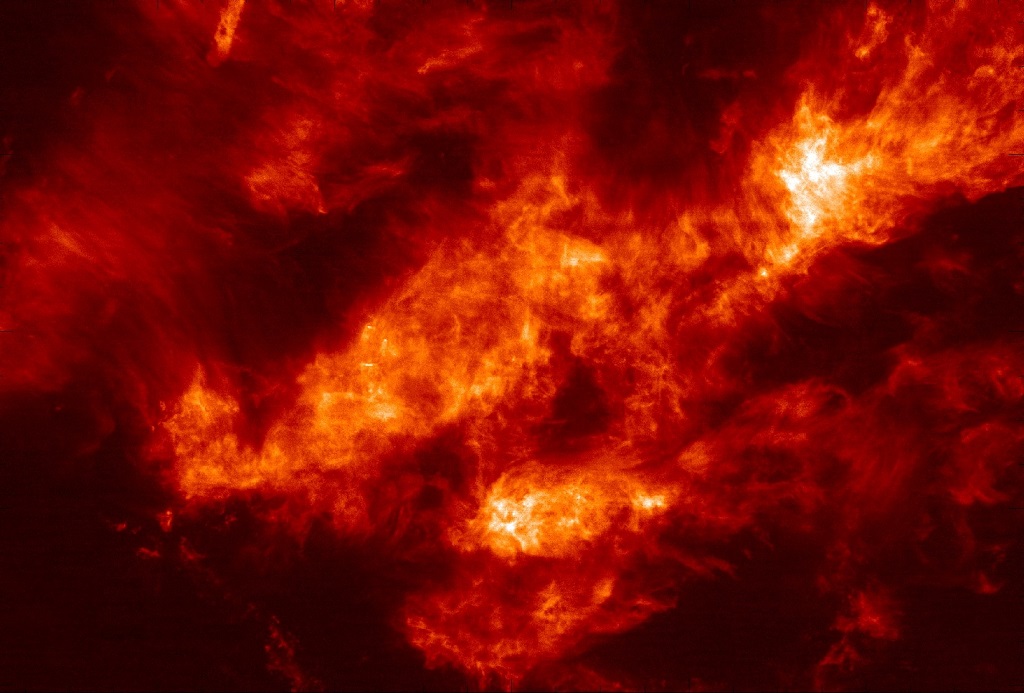 The Taurus Molecular Cloud (TMC) is a star-forming region located only about 450 light-years away from Earth in the northern constellation of Taurus (the Bull). The vast cloud is one of the nearest large stellar nurseries to Earth and contains over 400 young stars.

Molecular clouds are dense and compact regions throughout the Milky Way and other galaxies where gas and dust clump together. The vast majority of gas in these clouds consists of molecular hydrogen (H2), and it is in these cold regions that stars are born. Since cold H2 does not easily radiate, astronomers trace these cosmic cribs by targeting other molecules, which are present there in very low abundance but radiate quite efficiently. The most important of these tracers is carbon monoxide (CO), which emits light more readily and therefore is more easily detectable.

The Taurus Molecular Cloud contains numerous deeply embedded protostars with massive disks left over from stellar formation, T Tauri stars (very young low-mass stars, still in the process of gravitational contraction), Herbig-Haro objects (narrow jets of gas and matter, ejected by newly born stars at speeds of several hundred kilometers per second), and a growing number of confirmed brown dwarfs (dark substellar objects that are too low in mass to sustain hydrogen fusion). Star formation is ongoing, and the cloud covers all stages of stellar evolution.

To produce that amount of vapour, there must be more than three million frozen Earth oceans’ worth in Lynds 1544. Before these observations, the understanding was that all the water was frozen onto dust grains because it was too cold to be in the gas phase and so it could not be measured.

The Herschel observations also revealed that the water molecules are flowing towards the heart of Lynds 1544 where a new star will probably form, indicating that gravitational collapse has just started. There is enough material to form a star at least as massive as our Sun, which means it could also be forming a planetary system, possibly one like ours.

Some of the water vapour detected in Lynds 1544 will go into forming the star, but the rest will be incorporated into the surrounding disk, providing a rich water reservoir to feed potential new planets.

There are no large stars to illuminate the Taurus Molecular Cloud, so it’s completely black in visible light. This image shows the cloud in the infrared.

Studying the Taurus Molecular Cloud and other stellar nurseries will learn us more of the physical and chemical conditions that lead to the formation of molecular clouds, and the very early phases of star- and planet formation.