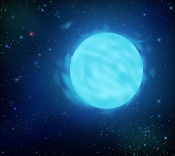 In 2010 scientists discovered four ‘monster’ sized stars, with the heaviest more than 300 times as massive as our Sun. Despite their incredible luminosity, these exotic objects — located in the giant star cluster R136 in the nearby galaxy the Large Magellanic Cloud — have oddly so far been found nowhere else. Now a [continue reading]