A team made up of a diverse group of researchers has found after studying the composition of several asteroids that most such planetesimals had an abundance of highly siderophile elements in their mantles suggesting, as the team writes in their paper published in the journal Science, that they were subject to the same inner solar system bombardment by siderophile laden chondrites as were planets, including Earth. 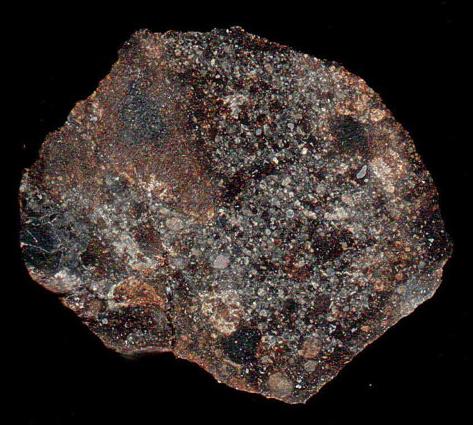 NWA 869  – slice showing the many different characters that make up this interesting  meteorite.

The Earth, like other planets, is believed to have come to its current state by first starting out as a ball or disk, of gas. As time passed the gases began to coalesce due to rotation, causing gravity to occur. The addition of gravity then caused other small elements in the vicinity to be pulled in adding to its size, a process known as accretion. As it did so, iron loving elements (siderophiles – such as platinum, gold rhenium, osmium, iridium, etc.) made their way to the core, where they bound tightly to the iron they found there. Later on however, as the planetesimal continued to grow as a result of asteroid and comet strikes, it eventually grew to become a planet. But because the mantle had grown dense over this period, new siderophiles weren’t able to make their way to the core, so they were left to become part of the crust and then the mantle. This new research suggests that the same thing occurred with asteroids.

The researchers made this discovery by studying the giant asteroid Vesta and other smaller asteroids, noting that as with Earth, siderophiles were found in both the cores and mantles, suggesting that they too had suffered bombardment from other objects after settling into a stable core state.

Scientists believe that the planets and asteroids that exist in our solar system were created some four billion years ago, and that they had settled into stable entities approximately ten million years later. Thus, subsequent impacts by siderophiles came after that time. But because asteroids are thought to have developed a little faster and earlier than the planets, experts believed they would likely have plenty of siderophiles in their cores, but little outside of them. Thus this new evidence comes as a surprise to the research community and means that estimates of the time period that accretion occurred for such planetesimals will have to be revised.

ABSTRACT
Late accretion of primitive chondritic material to Earth, the Moon, and Mars, after core formation had ceased, can account for the absolute and relative abundances of highly siderophile elements (HSEs) in their silicate mantles. Here we show that smaller planetesimals also possess elevated HSE abundances in chondritic proportions. This demonstrates that late addition of chondritic material was a common feature of all differentiated planets and planetesimals, irrespective of when they accreted; occurring ≤5 to ≥150 million years after the formation of the solar system. Parent-body size played a role in producing variations in absolute HSE abundances among these bodies; however, the oxidation state of the body exerted the major control by influencing the extent to which late-accreted material was mixed into the silicate mantle rather than removed to the core.