The case of the missing quasar gas clouds has been solved by a worldwide research team led by Penn State University astronomers Nurten Filiz Ak and Niel Brandt. The the answer is: blowin’ in the wind. This discovery is being announced today in a paper published in The Astrophysical Journal, which describes 19 distant quasars whose giant clouds of gas seem to have disappeared in just a few years. 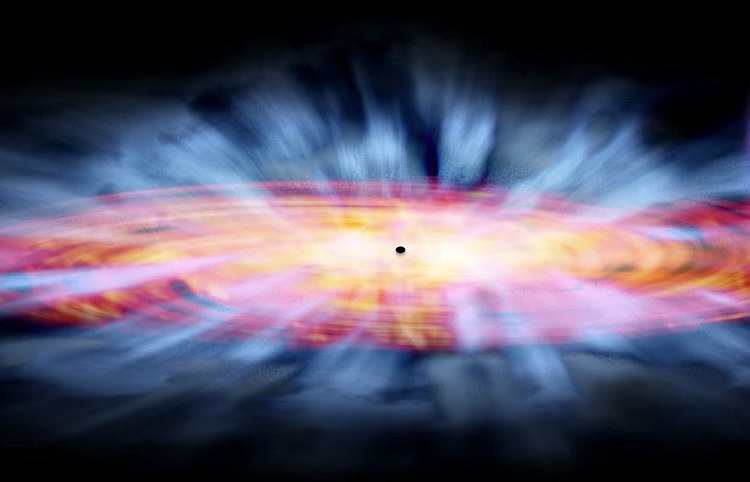 An artist’s impression of a quasar like one of the nineteen found by this study. The black dot in the center represents the supermassive black hole at the center of the quasar. The red-and-yellow spiral surrounding it shows the accretion disk of hot gas falling into the black hole. Some of this gas is ejected as the quasar’s wind, which is shown in light blue. The size of the accretion disk shown is comparable to the size of our Solar System. Image Credit: NASA/CXC/M. Weiss, Nahks Tr’Ehnl, Nurten Filiz Ak

“We know that many quasars have structures of fast-moving gas caught up in ‘quasar winds,’ and now we know that those structures can regularly disappear from view,” says Filiz Ak, a graduate student at Penn State and lead author of the paper. “But why is this happening?”

Quasars are powered by gas falling into supermassive black holes at the centers of galaxies. As the gas falls into the black hole, it heats up and gives off light. The gravitational force from the black hole is so strong, and is pulling so much gas, that the hot gas glows brighter than the entire surrounding galaxy.

But with so much going on in such a small space, not all the gas is able to find its way into the black hole. Much of it instead escapes, carried along by strong winds blowing out from the center of the quasar.

“These winds blow at thousands of miles per second, far faster than any winds we see on Earth,” says Niel Brandt, a professor at Penn State and Filiz Ak’s Ph.D. advisor. “The winds are important because we know that they play an important role in regulating the quasar’s central black hole, as well as star formation in the surrounding galaxy.” 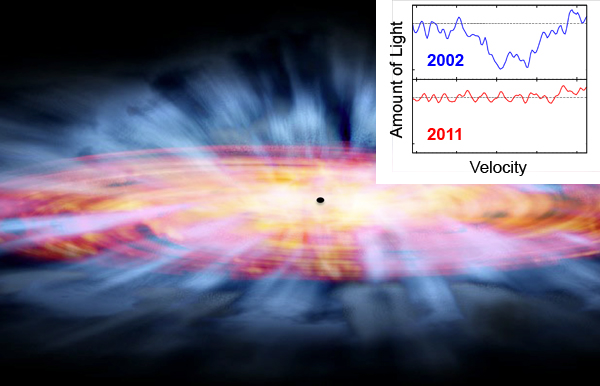 This is the same artist’s impression of a quasar, but now with an inset at the top right, which shows two SDSS spectra for the same quasar (named SDSS J093620.52+004649.2). The upper spectrum (blue) was taken in 2002, while the lower spectrum (red) was taken in 2011. The deep, wide valley in the 2002 spectrum is a so-called “broad absorption line” — a feature which has disappeared from its spectrum by 2011. Image Credit: NASA/CXC/M. Weiss, Nahks Tr’Ehnl, Nurten Filiz Ak

Many quasars show evidence of these winds in their spectra — measurements of the amount of light that the quasar gives off at different wavelengths. Just outside the center of the quasar are clouds of hot gas flowing away from the central black hole. As light from deeper in the quasar passes through these clouds on its way to Earth, some of the light gets absorbed at particular wavelengths corresponding to the elements in the clouds.

As gas clouds are accelerated to high speeds by the quasar, the Doppler effect spreads the absorption over a broad range of wavelengths, leading to a wide valley visible in the spectrum. The width of this “broad absorption line (BAL)” measures the speed of the quasar’s wind. Quasars whose spectra show such broad absorption lines are known as “BAL quasars.”

But the hearts of quasars are chaotic, messy places. Quasar winds blow at thousands of miles per second, and the disk around the central black hole is rotating at speeds that approach the speed of light. All this adds up to an environment that can change quickly.

Previous studies had found a few examples of quasars whose broad absorption lines seemed to have disappeared between one observation and the next. But these quasars had been found one at a time, and largely by chance — no one had ever done a systematic search for them. Undertaking such a search would require measuring spectra for hundreds of quasars, spanning several years. An SDSS image of the quasar SDSS J093620.52+004649.2, one of the 19 quasars with disappearing BAL troughs. The constellation map on the bottom left shows the quasar’s position in the constellation Hydra. Three successive views zoom in closer and closer to the quasar. Image Credit: Jordan Raddick (Johns Hopkins University) and the SDSS-III collaboration. Hydra constellation chart from: The Constellations, produced by the International Astronomical Union and Sky and Telescope magazine (Roger Sinnott, Rick Fienberg, and Alan MacRobert)

Over the past three years, as part of SDSS-III’s Baryon Oscillation Spectroscopic Survey (BOSS), the researchers specifically have been seeking out repeated spectra of BAL quasars through a program proposed by Brandt and his colleagues.

Their persistence paid off — the research team gathered a sample of 582 BAL quasars, each of which had repeat observations over a period of between one and nine years – a sample about 20 times larger than any that had been previously assembled. The team then began to search for changes, and were quickly rewarded. In 19 of the quasars, the broad absorption lines had disappeared.

What’s going on here? There are several possible explanations, but the simplest is that, in these quasars, gas clouds that we had seen previously are literally “gone with the wind” —the rotation of the quasar’s disk and wind have carried the clouds out of the line-of-sight between us and the quasar.

And because the sample of quasars is so large, and had been gathered in such a systematic manner, the team can go beyond simply identifying disappearing gas clouds. “We can quantify this phenomenon,” says Filiz Ak.

Finding nineteen such quasars out of 582 total indicates that about three percent of quasars show disappearing gas clouds over a three-year span, which in turn suggests that a typical quasar cloud spends about a century along our line of sight. “Since the Universe is 14 billion years old, we’re used to astronomical phenomena lasting a very long time,” says Pat Hall of York University in Toronto, another team member. “It’s fascinating to discover something that changes within a human lifetime.”

Now, as other astronomers come up with models of quasar winds, their models will need to explain this 100-year timescale. As theorists begin to consider the results, the team continues to analyze their sample of quasars — more results are coming soon. “This is really exciting for me,” Filiz Ak says. “I’m sitting at my desk, discovering the nature of the most powerful winds in the Universe.”

See it for yourself!

The quasar above is part of the SDSS-III’s Data Release 9, which means that all its data available free of charge online. Use the links below to see the quasar change right before your eyes!

The three links below will take you to an interactive spectrum viewer for three spectra of this quasar, measured by the Sloan Digital Sky Survey on three different nights. The spectra are labeled at the bottom in Ångstroms — one Ångstrom equals one ten-billionth of a meter.