What sounds like science fiction is actually reality: using the 30m-telescope of the Institute for Radio Astronomy for astronomical observations in the millimetre range of wavelengths, astronomers have detected, for the first time, the interstellar molecule C3H+, in our galaxy. It belongs to the hydrocarbon family and is thus part of major energy resources of our planet, i.e. petroleum and natural gas. The discovery of this molecule at the heart of the famous Horsehead Nebula in the Constellation of Orion also confirms that this region is an active cosmic refinery. 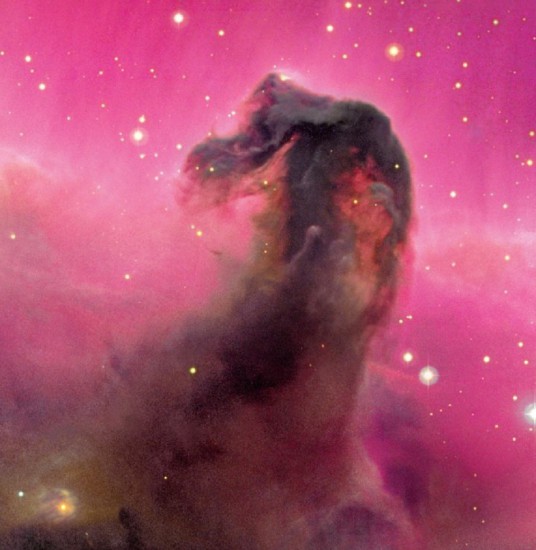 The distinct Horsehead Nebula in the Orion constellation is not only a favourite object of astrophotographers all over the world, but apparently also a cosmic petroleum refinery. Image Credit: Canada-France-Hawaii Telescope/Coelum

The Horsehead Nebula, 1,300 light-years from Earth, is located in the Orion constellation, which will become more and more visible in the night skies over the next few weeks. Due to its famous and easily-recognizable shapes which gave the Nebula its name, is one of the most photographed objects by astronomers. But the Horsehead Nebula is also a fantastic interstellar chemistry lab, where high density gas and intense stellar light continuously interact and trigger many-layered chemical reactions.

Using the 30m-radiotelescope near the Pico del Veleta in the Spanish Sierra Nevada, IRAM-astronomers Jérôme Pety and his team for the first time undertook a systematic survey of the chemical content of the Horsehead’s mane. The international project, called “Whisper”, would not have been possible without the recent technical upgrades of the telescope instruments. “Earlier, such a comprehensive enterprise would have taken at least one year of observations. Now we could complete measurements after one week”, says Arnaud Belloche at the Max Planck Institute for Radio Astronomy. This opens new possibilities to classify the different kinds of gas in the Universe, based on the molecules they contain.

The radiotelescope used for the observations: the IRAM 30m located near Granada in Spain’s Sierra Nevada. Image Credit: IRAM

In their current survey, the scientists were able to detect 30 molecules in the region, including many small hydrocarbons, the smallest molecules that compose petroleum and natural gas. The researchers were surprised by the unexpectedly high levels of hydrocarbons. “The nebula a contains 200 times more hydrocarbons than the total amount of water on Earth!”, said astronomer Viviana Guzman. In addition, one of these small hydrocarbons, the propynylidyne ion (C3H+), was observed for the first time in space as part of this work – even though this positively charged ion is a key player in the chemical reactions which link the small hydrocarbons together.

But how do these hydrocarbons form? In their article, Jérôme Pety and his colleagues propose that they result from the fragmentation of giant carbonaceous molecules named PAHs (polycyclic aromatic hydrocarbons). These giant molecules could be eroded by ultra-violet light, giving a large amount of small hydrocarbons. This mechanism would be particularly efficient in regions like the Horsehead Nebula where the interstellar gas is directly exposed to the light of a nearby massive star. “We observe the operation of a natural refinery of petroleum of gigantic size”, concludes Jérôme Pety.