The Sloan Digital Sky Survey III (SDSS-III) has released the largest-ever three-dimensional map of massive galaxies and distant black holes, which will help astronomers explain the mysterious “dark matter” and “dark energy” that scientists know makes up 96 percent of the Universe. 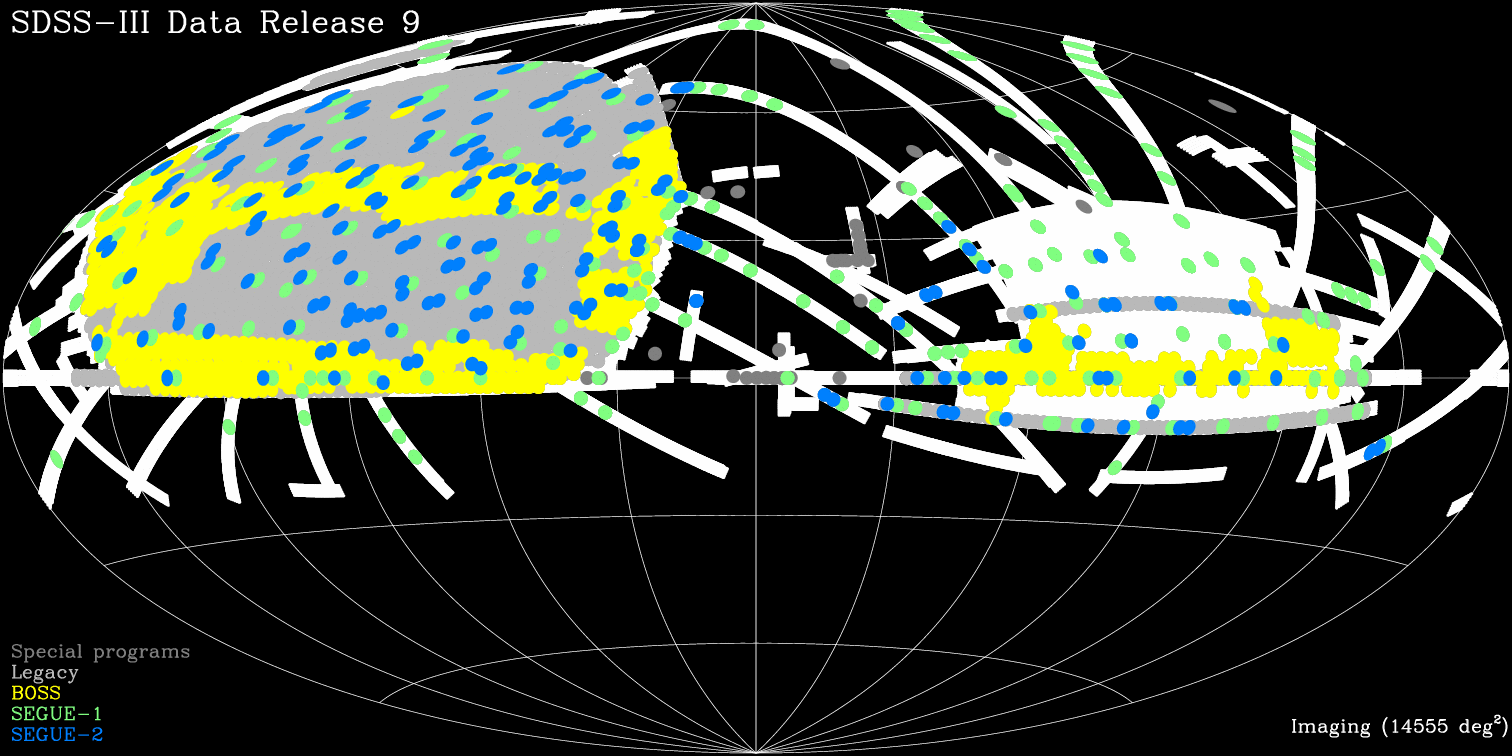 Early last year, the SDSS-III released the largest-ever image of the sky. With the new release of data, SDSS-III has begun to expand this image into a full three-dimensional map. Data Release 9 (DR9), posted online last week, makes available the first third of the galaxy map that this six-year project will create.

“What really makes me proud of this survey is our commitment to creating a legacy for the future,” said Michael Blanton, a professor at New York University who led the team that prepared DR9. “Our goal is to create a map of the Universe that will be used long after we are done, by future generations of astronomers, physicists and the general public.”

Data Release 9 is the latest in a series of data releases stretching back to 2001. This release includes new data from the ongoing SDSS-III Baryon Oscillation Spectroscopic Survey (BOSS), which will eventually measure the positions of 1.5 million massive galaxies over the past six billion years of cosmic time, as well as 160,000 quasars — giant black holes actively feeding on stars and gas — from as long ago as 12 billion years in the past.

With such a map, scientists can retrace the history of the Universe over the last six billion years. With that history, they can get better estimates for how much of the Universe is made up of dark matter – matter that we can’t directly see because it doesn’t emit or absorb light – and dark energy, the even more mysterious force that drives the accelerating expansion of the Universe.

“Dark matter and dark energy are two of the greatest mysteries of our time,” said David Schlegel of Lawrence Berkeley National Laboratory, who led the SDSS-III effort to map these galaxies and quasars. “We’re confident this new map will guide us, or someone else, in solving these mysteries.”

That map of the Universe is the centerpiece of DR9. It includes new spectra from 540,000 galaxies from when the Universe was half its present age. A spectrum is a measure of light from a galaxy at different wavelengths; from this information we can measure the distances to those galaxies. This distance information provides the third dimension in the DR9 map, providing a more detailed view of the structure of the Universe than has been measured before.

This animated flight through the universe was made by Miguel Aragon of Johns Hopkins University with Mark Subbarao of the Adler Planetarium and Alex Szalay of Johns Hopkins. There are close to 400,000 galaxies in the animation, with images of the actual galaxies in these positions (or in some cases their near cousins in type) derived from the Sloan Digital Sky Survey (SDSS) Data Release 7. Vast as this slice of the universe seems, its most distant reach is to redshift 0.1, corresponding to roughly 1.3 billion light years from Earth. SDSS Data Release 9 from the Baryon Oscillation Spectroscopic Survey (BOSS), led by Berkeley Lab scientists, includes spectroscopic data for well over half a million galaxies at redshifts up to 0.8 — roughly 7 billion light years distant — and over a hundred thousand quasars to redshift 3.0 and beyond.
Credit: Miguel A. Aragón (Johns Hopkins University), Mark SubbaRao (Adler Planetarium), Alex Szalay (Johns Hopkins University), Yushu Yao (Lawrence Berkeley National Laboratory, NERSC), and the SDSS-III Collaboration

Quasars provide further details to the three dimensional map and another way to measure the distribution of matter in the Universe. Quasars are the brightest objects in the distant Universe, and their spectra reveal intricate patterns imprinted by the intergalactic gas and underlying dark matter that lies between each quasar and the Earth.

The new data in DR9 are not only helping us understand the distant Universe, but also our own cosmic backyard, the Milky Way galaxy. DR9 includes better estimates for the chemical compositions of more than half a million stars in our own galaxy. “With these better estimates, we can look back at the history of our galaxy,” said Connie Rockosi of the University of California Santa Cruz, who leads the SDSS- III’s Milky Way study. “This new information can help us tell the story of how our galaxy formed, and how it came to be the Milky Way that we see today.”

All these new images and spectra contain the promise of new discoveries about our Universe — but the SDSS-III is only in the middle of its six-year survey, and will release three times as much data by the time it’s completed in 2014.

The hardware that the SDSS used to measure distances to the thousands of galaxies in Data Release 9.
The bottom image shows The Sloan Foundation Telescope. The top left image shows the meter-wide aluminum plate that the SDSS uses to measure the spectra of a thousand galaxies at a time. Each hole in the plate matches the position of a star or galaxy. A fiber optic cable (red and blue in the bottom image) connects each hole to the SDSS spectrograph. Markings on the plate (visible in the close-up view in the center-right) aid with the hand-plugging of the fibers.
Credit: Paul Preuss (Lawrence Berkeley National Laboratory), Dan Long (Apache Point Observatory), and the SDSS-III Collaboration

“The most fun part of making this data available online is knowing that anyone on the Internet can now access the very same data and search tools that professional astronomers use to make exciting discoveries about our Universe,” said Ani Thakar of Johns Hopkins University, a key member of the data team who works hard behind-the-scenes to distribute the terabytes of SDSS-III data to astronomers and the public through these data releases.

And DR9 doubtless contains many surprises.

“This is science at its collaborative best. SDSS-III scientists work together to address big questions extending from our own galaxy to distant reaches of the Universe — and then they share all of that data with the world to allow anyone to make the next big discovery,” said Michael Wood-Vasey, a professor at the University of Pittsburgh and the Scientific Spokesperson for the SDSS-III collaboration.