As black holes go, Sagittarius A* is relatively low-key. The supermassive black hole at the center of our galaxy emits very little energy for its size, giving off roughly as much energy as the Sun, even though it is 4 billion times as massive. 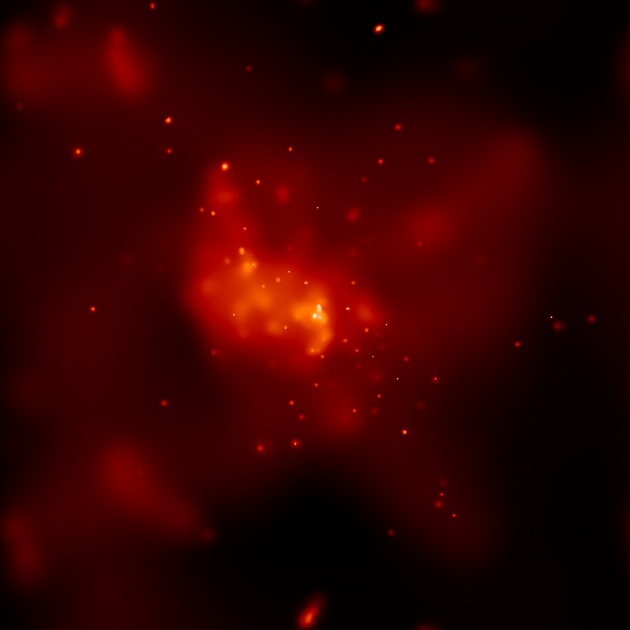 This false-color image shows the central region of our Milky Way Galaxy as seen by Chandra. The bright, point-like source at the center of the image was produced by a huge X-ray flare that occurred in the vicinity of the supermassive black hole at the center of our galaxy. Image Credit: NASA/MIT/F. Baganoff et al.

However, astronomers have observed that nearly once a day, the black hole rouses to action, emitting a brief burst of light before settling back down. It’s unclear what causes such flare-ups, and scientists have sought to characterize these periodic bursts in order to better understand how black holes evolve.

Now a team of scientists from MIT, the University of Amsterdam, the University of Michigan and elsewhere have used NASA’s Chandra X-Ray Observatory to detect the brightest flare ever observed from Sagittarius A*. The flare, recorded 26,000 light years away, is 150 times brighter than the black hole’s normal luminosity. Scientists observed the flare for more than one hour before it faded away. This brief burst of activity, they say, may be a clue to how mature black holes like Sagittarius A* behave.

“We’re learning what black holes do when they’re old,” says Joey Neilsen, a postdoc at MIT’s Kavli Institute for Astrophysics and Space Research. “They’re no young whippersnappers like quasars, but they’re still active, and how they’re active is an interesting question.”

Neilsen and his colleagues published their results recently in The Astrophysical Journal.

Astronomers detect black holes by the light energy given off as they swallow nearby matter. The centers of newborn galaxies and quasars can appear extremely bright, giving off massive amounts of energy as they devour their surroundings. As black holes age, they tend to slow down, consuming less and appearing fainter in the sky.

“Everyone has this picture of black holes as vacuum sweepers, that they suck up absolutely everything,” says Frederick K. Baganoff, a research scientist at MIT Kavli. “But in this really low-accretion-rate state, they’re really finicky eaters, and for some reason they actually blow away most of the energy.”

The onboard spectrometer split the black hole’s X-rays into various wavelengths, much like light passed through a prism. The researchers analyzed the data, and found a spike of 700 photons — which, while small compared with more active galaxies, was 150 times brighter than the black hole’s normal luminosity.

“Suddenly, for whatever reason, Sagittarius A* is eating a lot more,” says Michael Nowak, a research scientist at MIT Kavli. “One theory is that every so often, an asteroid gets close to the black hole, the black hole stretches and rips it to pieces, and eats the material and turns it into radiation, so you see these big flares.”

While such events appear to be relatively rare, Nowak suspects that flare-ups may occur more frequently than scientists expect. The team has reserved more than a month of time on the Chandra Observatory to study Sagittarius A* in hopes of identifying more flares, and possibly what’s causing them.

Mark Morris, a professor of astronomy at the University of California at Los Angeles, says that while less luminous flares occur daily, scientists have detected very few events from the black hole as bright as this recent flare-up.

“These bright flares give information on the flaring process that isn’t available with the weaker ones, such as how they fluctuate in time during the flare, how the spectrum changes, and how fast they rise and fall,” Morris says. “The greatest importance of this bright flare may be that it builds up the statistics on the characteristics of strong flares that can eventually be used to [identify] the cause of such flares.”

Even more intriguing to Baganoff is why the black hole emits so little energy. In 2003, he ran the very first observations with the then-new Chandra Observatory, and calculated that, given the amount of gas in its surroundings, Sagittarius A* should be about a million times brighter than it is — a finding that suggested the black hole throws away most of the matter it would otherwise consume. The physics underlying such a phenomenon remain a puzzle that Baganoff and others hope to tease out with future observations.

“We’re really studying the great escape, because most of the gas escapes, and that’s not what we expect,” Baganoff says. “So we’re piecing out the history of the activity of the center of our galaxy.”