Two X-ray space observatories, NASA’s Nuclear Spectroscopic Telescope Array (NuSTAR) and the European Space Agency’s XMM-Newton, have teamed up to measure definitively, for the first time, the spin rate of a black hole with a mass 2 million times that of our Sun. 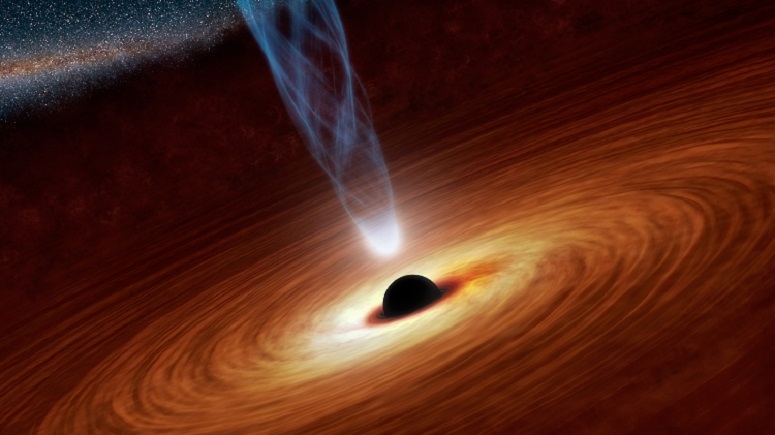 This artist’s concept illustrates a supermassive black hole with millions to billions times the mass of our Sun.  This supermassive black hole at the center is surrounded by matter flowing onto the black hole in what is termed an accretion disk. This disk forms as the dust and gas in the galaxy falls onto the hole, attracted by its gravity. Also shown is an outflowing jet of energetic particles, believed to be powered by the black hole’s spin. The regions near black holes contain compact sources of high energy X-ray radiation thought, in some scenarios, to originate from the base of these jets. This high energy X-radiation lights up the disk, which reflects it, making the disk a source of X-rays. The reflected light enables astronomers to see how fast matter is swirling in the inner region of the disk, and ultimately to measure the black hole’s spin rate. Image Credit: NASA/JPL-Caltech

The supermassive black hole lies at the dust- and gas-filled heart of a galaxy known as the Great Barred Spiral Galaxy (NGC 1365), and it is spinning almost as fast as Einstein’s theory of gravity will allow. The findings, which appear in a new study in the journal Nature, resolve a long-standing debate about similar measurements in other black holes and will lead to a better understanding of how black holes and galaxies evolve.

“This is hugely important to the field of black hole science,” said Lou Kaluzienski, a NuSTAR program scientist at NASA Headquarters in Washington.

The observations also are a powerful test of Einstein’s theory of general relativity, which says gravity can bend space-time, the fabric that shapes our Universe, and the light that travels through it.

Black holes are tremendous objects whose immense gravity can distort and twist space-time, the fabric that shapes our universe. These effects, consequences of Einstein’s general theory of relativity, result in the bending of light as it travels through space-time. By looking for these light distortions in X-rays streaming off material near black holes, researchers can gain information about their spin rates. This chart illustrates the basic model for determining the spin rates of black holes. The three artist’s concepts represent the different types of spin: retrograde rotation, where the disk of matter falling onto the hole, called an accretion disk, moves in the opposite direction of the black hole; no spin; and prograde rotation, where the disk spins in the same direction as the black hole. The faster a black hole spins, the closer its accretion disk can lie to it — another consequence of Einstein’s theory of relativity. Image Credit: NASA/JPL-Caltech

“We can trace matter as it swirls into a black hole using X-rays emitted from regions very close to the black hole,” said the coauthor of a new study, NuSTAR principal investigator Fiona Harrison of the California Institute of Technology in Pasadena. “The radiation we see is warped and distorted by the motions of particles and the black hole’s incredibly strong gravity.”

NuSTAR, an Explorer-class mission launched in June 2012, is designed to detect the highest-energy X-ray light in great detail. It complements telescopes that observe lower-energy X-ray light, such as XMM-Newton and NASA’s Chandra X-ray Observatory. Scientists use these and other telescopes to estimate the rates at which black holes spin.

Until now, these measurements were not certain because clouds of gas could have been obscuring the black holes and confusing the results. With help from XMM-Newton, NuSTAR was able to see a broader range of X-ray energies and penetrate deeper into the region around the black hole. The new data demonstrate that X-rays are not being warped by the clouds, but by the tremendous gravity of the black hole. This proves that spin rates of supermassive black holes can be determined conclusively. Scientists measure the spin rates of supermassive black holes by spreading the X-ray light into different colors. The light comes from accretion disks that swirl around black holes, as shown in both of the artist’s concepts. They use X-ray space telescopes to study these colors, and, in particular, look for a “fingerprint” of iron — the peak shown in both graphs, or spectra — to see how sharp it is. Prior to observations with NASA’s Spectroscopic Telescope Array, or NuSTAR, and the European Space Agency’s XMM-Newton telescope, there were two competing models to explain why this peak might not appear to be sharp. The “rotation” model shown at top held that the iron feature was being spread out by distorting effects caused by the immense gravity of the black hole. If this model were correct, then the amount of distortion seen in the iron feature should reveal the spin rate of the black hole. The alternate model held that obscuring clouds lying near the black hole were making the iron line appear artificially distorted. If this model were correct, the data could not be used to measure black hole spin. Image Credit: NASA/JPL-Caltech

“If I could have added one instrument to XMM-Newton, it would have been a telescope like NuSTAR,” said Norbert Schartel, XMM-Newton Project Scientist at the European Space Astronomy Center in Madrid. “The high-energy X-rays provided an essential missing puzzle piece for solving this problem.”

Measuring the spin of a supermassive black hole is fundamental to understanding its past history and that of its host galaxy.

“These monsters, with masses from millions to billions of times that of the Sun, are formed as small seeds in the early Universe and grow by swallowing stars and gas in their host galaxies, merging with other giant black holes when galaxies collide, or both,” said the study’s lead author, Guido Risaliti of the Harvard-Smithsonian Center for Astrophysics in Cambridge, Mass., and the Italian National Institute for Astrophysics. This image taken by the ultraviolet-light monitoring camera on the European Space Agency’s (ESA’s) XMM-Newton telescope shows the beautiful spiral arms of the galaxy NGC1365. Copious high-energy X-ray emission is emitted by the host galaxy, and by many background sources. The large regions observed by previous satellites contain so much of this background emission that the radiation from the central black hole is mixed and diluted into it. NuSTAR, NASA’s newest X-ray observatory, is able to isolate the emission from the black hole, allowing a far more precise analysis of its properties. Image Credit: ESA

Astronomers look for these warping effects by analyzing X-ray light emitted by iron circulating in the accretion disk. In the new study, they used both XMM-Newton and NuSTAR to simultaneously observe the black hole in NGC 1365. While XMM-Newton revealed that light from the iron was being warped, NuSTAR proved that this distortion was coming from the gravity of the black hole and not gas clouds in the vicinity. NuSTAR’s higher-energy X-ray data showed that the iron was so close to the black hole that its gravity must be causing the warping effects. NASA’s Nuclear Spectroscopic Telescope Array, or NuSTAR, has helped to show, for the first time, that the spin rates of black holes can be measured conclusively. It did this, together with the European Space Agency’s XMM-Newton, by ruling out the possibility that obscuring clouds were partially blocking X-ray right coming from black holes. The solid lines show two theoretical models that explain low-energy X-ray emission seen previously from the spiral galaxy NGC 1365 by XMM-Newton. The red line explains the emission using a model where clouds of dust and gas partially block the X-ray light, and the green line represents a model in which the emission is reflected off the inner edge of the accretion disk, very close to the black hole. The blue circles show the latest measurements from XMM-Newton, and the yellow circles show the data from NuSTAR. While both models fit the XMM-Newton data equally well, only the disk reflection model fits the NuSTAR data. The results show that the iron feature, the sharp peak at left, is being affected black hole’s immense gravity and not intervening clouds. The degree to which the iron feature is spread out reveals the spin rate of the black hole. Image Credit: NASA/JPL-Caltech

With the possibility of obscuring clouds ruled out, scientists can now use the distortions in the iron signature to measure the black hole’s spin rate. The findings apply to several other black holes as well, removing the uncertainty in the previously measured spin rates.