Researchers at the University of Leeds may have solved a key puzzle about how objects from space could have kindled life on Earth. 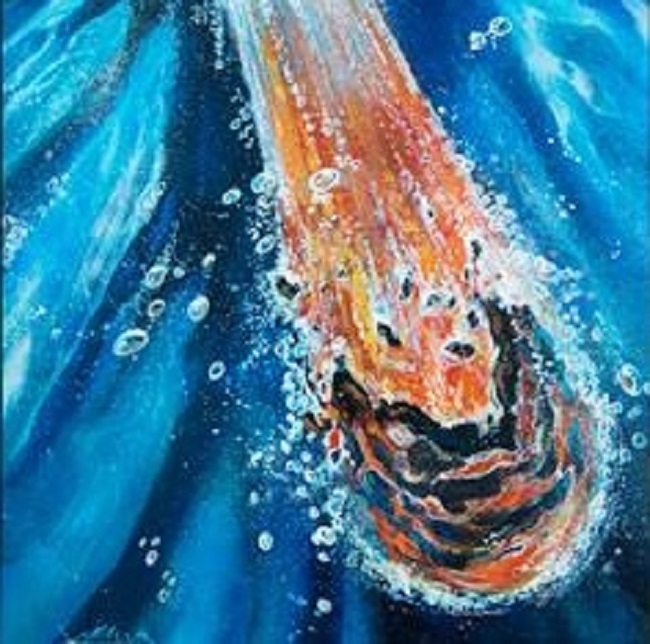 An artists impression of a meteorite landing in a hot, acidic pool of liquids. Image Credit: James McKay 2013 (www.jamesmckay.info)

While it is generally accepted that some important ingredients for life came from meteorites bombarding the early Earth, scientists have not been able to explain how that inanimate rock transformed into the building blocks of life.

This new study shows how a chemical, similar to one now found in all living cells and vital for generating the energy that makes something alive, could have been created when meteorites containing phosphorus minerals landed in hot, acidic pools of liquids around volcanoes, which were likely to have been common across the early Earth.

“The mystery of how living organisms sprung out of lifeless rock has long puzzled scientists, but we think that the unusual phosphorus chemicals we found could be a precursor to the batteries that now power all life on Earth. But the fact that it developed simply, in conditions similar to the early Earth, suggests this could be the missing link between geology and biology,” said Dr Terry Kee, from the University’s School of Chemistry, who led the research.

All life on Earth is powered by a process called chemiosmosis, where the chemical adenosine triphosphate (ATP), the rechargeable chemical ‘battery’ for life, is both broken down and re-formed during respiration to release energy used to drive the reactions of life, or metabolism. The complex enzymes required for both the creation and break down of ATP are unlikely to have existed on the Earth during the period when life first developed. This led scientists to look for a more basic chemical with similar properties to ATP, but that does not require enzymes to transfer energy.

Phosphorus is the key element in ATP, and other fundamental building blocks of life like DNA, but the form it commonly takes on Earth, phosphorus (V), is largely insoluble in water and has a low chemical reactivity. The early Earth, however, was regularly bombarded by meteorites and interstellar dust rich in exotic minerals, including the far more reactive form of phosphorus, the iron-nickel-phosphorus mineral schreibersite.

The scientists simulated the impact of such a meteorite with the hot, volcanically-active, early Earth by placing samples of the Sikhote-Alin meteorite, an iron meteorite which fell in Siberia in 1947, in acid taken from the Hveradalur geothermal area in Iceland. The rock was left to react with the acidic fluid in test tubes incubated by the surrounding hot spring for  four days, followed by a further 30 days at room temperature. 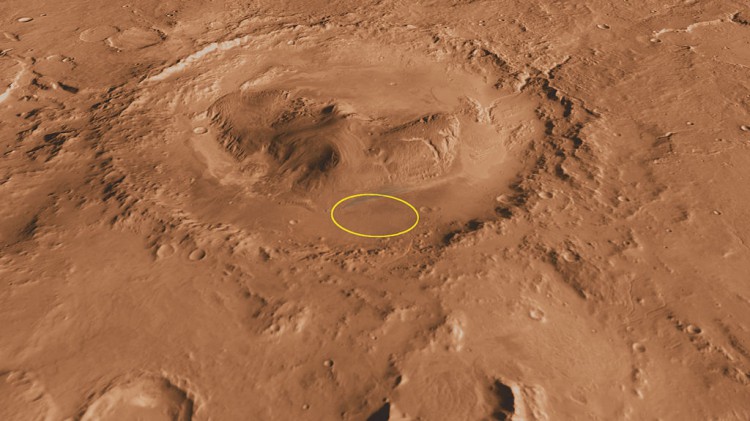 This oblique, southward-looking view of Gale crater on Mars shows the landing site and the mound of layered rocks that Curiosity is investigating. The landing site is in the smooth area in front of the mound (marked by a yellow ellipse). Image Credit: NASA/JPL-Caltech/ASU/UA

In their analysis of the resulting solution the scientists found the compound pyrophosphite, a molecular ‘cousin’ of pyrophosphate – the part of ATP responsible for energy transfer. The scientists believe this compound could have acted as an earlier form of ATP in what they have dubbed ‘chemical life’.

“Chemical life would have been the intermediary step between inorganic rock and the very first living biological cell. You could think of chemical life as a machine –a robot, for example, is capable of moving and reacting to surroundings, but it is not alive. With the aid of these primitive batteries, chemicals became organised in such a way as to be capable of more complex behaviour and would have eventually developed into the living biological structures we see today,” said Dr Terry Kee.

The team from NASA’s Jet Propulsion Laboratory (JPL-Caltech) working on the Curiosity rover, which landed on Mars in August last year, has recently reported the presence of phosphorus on the Red Planet.

“If Curiosity has found phosphorus in one of the forms we produced in Iceland, this may  indicate that conditions on Mars were at one point suitable for the development of life in much the same way we now believe it developed on Earth,” added Dr Kee.

The team at Leeds are now working with colleagues at JPL-Caltech to understand how these early batteries and the ‘chemical life’ they became part of might have developed into biological life. As part of this work they will be using facilities in the University of Leeds’ Faculty of Engineering, currently used to test new fuel cells, to build a ‘geological fuel cell’ using minerals and gases common on the early Earth. Researchers will apply different chemicals to its surface and monitor the reactions take place and the chemical products which develop.

The team also hope to travel to Disko Island in Greenland which is home to the Earth’s only naturally-occurring source of schreibersite, the mineral found in the Sikhote-Alin meteorite. Here, they hope to repeat their experiments and show that the same chemicals develop in an entirely Earth-originated setting.

The paper “Hydrothermal modification of the Sikhote-Alin iron meteorite under low pH geothermal environments. A plausibly prebiotic route to activated phosphorus on the early Earth” was published online by the journal Geochimica et Cosmochimica Acta on 15th March 2013. (http://www.sciencedirect.com/science/article/pii/S0016703713000161)

Source: The University of Leeds