A pair of newly discovered stars is the third-closest binary star system to the Sun, according to a paper that will be published in Astrophysical Journal Letters. The duo is the closest star system discovered since 1916. The discovery was made by Kevin Luhman, an associate professor of astronomy and astrophysics at Penn State University and a researcher in Penn State’s Center for Exoplanets and Habitable Worlds.

This image is an artist’s conception of the binary system WISE J104915.57-531906 with the Sun in the background.
Image Credit: Janella Williams, Penn State University

Both stars in the new binary system are “brown dwarfs,” which are stars that are too small in mass to ever become hot enough to ignite hydrogen fusion. As a result, they are very cool and dim, resembling a giant planet like Jupiter more than a bright star like the Sun.

“The distance to this brown dwarf pair is 6.5 light years — so close that Earth’s television transmissions from 2006 are now arriving there,” Luhman said. “It will be an excellent hunting ground for planets because it is very close to Earth, which makes it a lot easier to see any planets orbiting either of the brown dwarfs.” Since it is the third-closest star system, in the distant future it might be one of the first destinations for manned expeditions outside our Solar System,” Luhman said.

WISE J104915.57-531906 was discovered through its rapid motion across the sky, which is shown in these images taken between 1978 and 2010 by the Digitized Sky Survey, the Two Micron All-Sky Survey, and the WISE satellite. Credit: NASA/STScI/JPL/IPAC/University of Massachusetts

The star system is named “WISE J104915.57-531906” or “WISE 1049-5319” for short because it was discovered in a map of the entire sky obtained by the NASA-funded Wide-field Infrared Survey Explorer (WISE) satellite. It is only slightly farther away than the second-closest star, Barnard’s star, which was discovered 6.0 light years from the Sun in 1916. The closest star system consists of Alpha Centauri, found to be a neighbor of the Sun in 1839 at 4.4 light years, and the fainter Proxima Centauri, discovered in 1917 at 4.2 light years.

Edward (Ned) Wright, the principal investigator for the WISE satellite, said “One major goal when proposing WISE was to find the closest stars to the Sun. WISE 1049-5319 is by far the closest star found to date using the WISE data, and the close-up views of this binary system we can get with big telescopes like Gemini and the future James Webb Space Telescope will tell us a lot about the low mass stars known as brown dwarfs.” Wright is the David Saxon Presidential Chair in Physics and a professor of physics and astronomy at UCLA. WISE J104915.57-531906 is at the center of the larger image, which was taken by the WISE satellite. It appeared to be a single object, but a sharper image from Gemini Observatory revealed that it was binary star system. Image Credit: NASA/JPL/Gemini Observatory/AURA/NSF

Astronomers have long speculated about the possible presence of a distant, dim object orbiting the Sun, which is sometimes called Nemesis. However, Luhman has concluded, “we can rule out that the new brown dwarf system is such an object because it is moving across the sky much too fast to be in orbit around the Sun.”

To discover the new star system, Luhman studied the images of the sky that the WISE satellite had obtained during a 13-month period ending in 2011. During its mission, WISE observed each point in the sky 2 to 3 times. “In these time-lapse images, I was able to tell that this system was moving very quickly across the sky — which was a big clue that it was probably very close to our Solar System,” Luhman said. 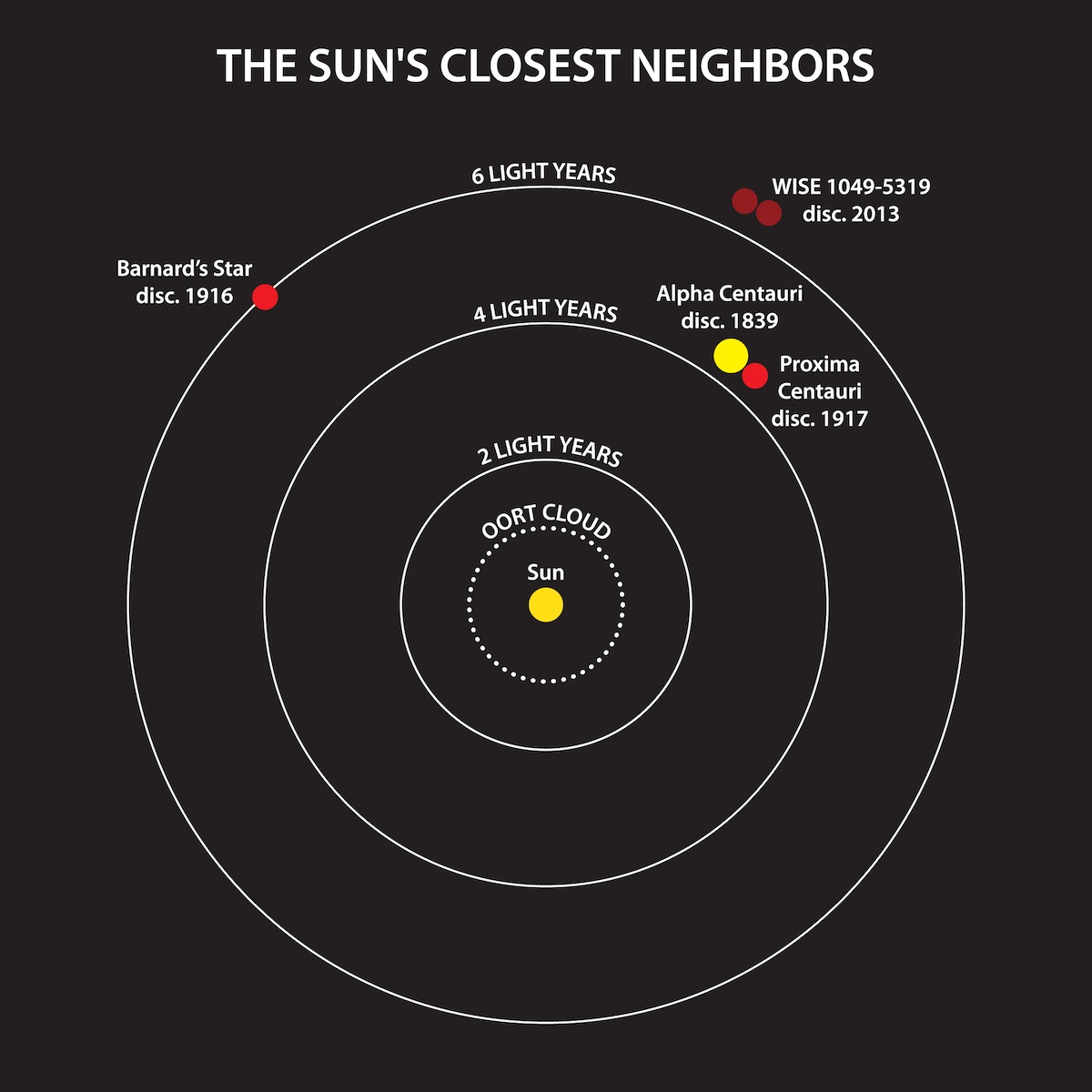 This diagram illustrates the locations of the star systems that are closest to the Sun. The year when each star was discovered to be a neighbor of the Sun is indicated. The binary system WISE J104915.57-531906 is the third nearest system to the Sun, and the closest one found in a century. Image Credit: Janella Williams, Penn State University

After noticing its rapid motion in the WISE images, Luhman went hunting for detections of the suspected nearby star in older sky surveys. He found that it indeed was detected in images spanning from 1978 to 1999 from the Digitized Sky Survey, the Two Micron All-Sky Survey, and the Deep Near Infrared Survey of the Southern Sky. “Based on how this star system was moving in the images from the WISE survey, I was able to extrapolate back in time to predict where it should have been located in the older surveys and, sure enough, it was there,” Luhman said.

By combining the detections of the star system from the various surveys, Luhman was able to measure its distance via parallax, which is the apparent shift of a star in the sky due to the Earth’s orbit around the Sun. He then used the Gemini South telescope on Cerro Pachón in Chile to obtain a spectrum of it, which demonstrated that it had a very cool temperature, and hence was a brown dwarf. “As an unexpected bonus, the sharp images from Gemini also revealed that the object actually was not just one but a pair of brown dwarfs orbiting each other,” Luhman said.

“It was a lot of detective work,” Luhman said. “There are billions of infrared points of light across the sky, and the mystery is which one — if any of them — could be a star that is very close to our Solar System.”

Click here for a PDF of the research paper described above.