Cosmologist Christof Wetterich of the University of Heidelberg has uploaded a paper to the arXiv server in which he claims it’s possible that the theory of the expansion of the Universe might be incorrect. He suggests instead that the redshift observed by researchers here on Earth might be caused by an increase in the mass in the Universe. 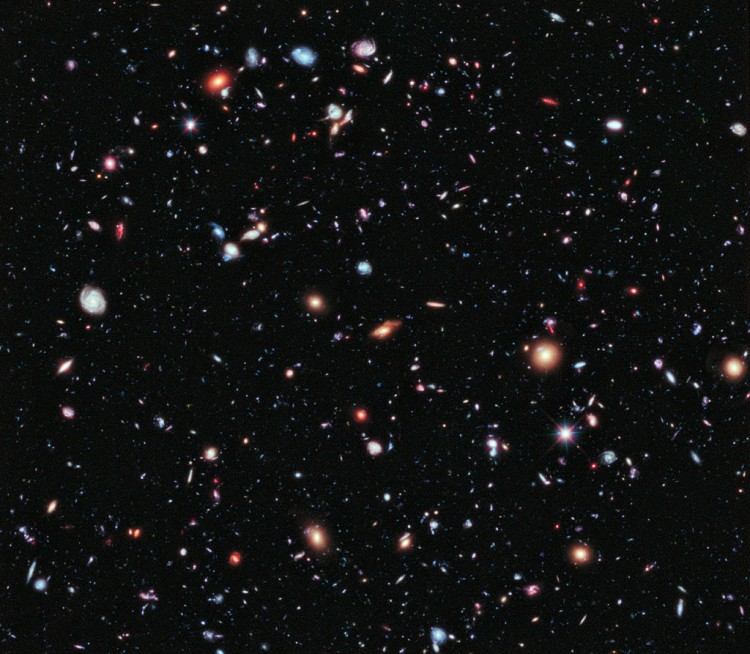 Called the eXtreme Deep Field, or XDF, this photo was assembled by combining 10 years of NASA Hubble Space Telescope photographs taken of a patch of sky in the constellation Fornax. The XDF is a small fraction of the angular diameter of the full Moon. The full-color XDF image reaches very faint galaxies, and includes very deep exposures in red light from Hubble’s infrared camera, enabling new studies of the earliest galaxies in the Universe. The XDF contains about 5,500 galaxies even within this small field of view. The faintest galaxies are one ten-billionth the brightness of what the human eye can see. Image Credit: NASA, ESA, G. Illingworth, D. Magee, and P. Oesch (University of California, Santa Cruz), R. Bouwens (Leiden University), and the HUDF09 Team

For nearly a century, the consensus among astrophysicists has been that the Universe started with a Big Bang and has been expanding ever since. This hypothesis formed because researchers found that in analyzing the light emitted from stars, a redshift occurred—where its frequency changes as an object that emits light moves away from us. But Wetterich says the redshift might be due to something else—an increase in the total mass in the Universe.

Wetterich’s idea is that light emitted from an atom is governed by the mass of its particles—if that atom were to become larger in mass, the light that it emits would change in frequency as its electrons became more energetic. More energy would appear as light moving toward the blue spectrum, while less energy (an atom losing mass), would move toward the red spectrum. Thus, Wetterich reasons, if the mass of observable objects were once less, we would now see them with a redshift as they expand. If his line of reasoning is true, Wetterich says it’s possible that the Universe is actually contracting.

Wetterich’s paper hasn’t been peer reviewed yet, but thus far, comments by others in the field suggest openness to this new line of thinking. That might be because one exciting prospect of this new theory is that it would do away with the idea of a singularity existing just before the Big Bang—a point at which conventional physics breaks down. Instead it might suggest that the Universe is simply in a constant state of flux with no real beginning and no real end.

Unfortunately, Wetterich’s theory can’t be tested because of the relative nature of mass. Everything we are able to see has a mass that is relative in size to everything else. Thus if it’s all growing, we wouldn’t have anything to measure it against to see that it’s happening.

More information: A Universe without expansion by C. Wetterich