A University of Minnesota-led experiment is aboard NASA’s Radiation Belt Storm Probes (RBSP) mission, a probe of the forces that govern radiation in the Van Allen Radiation Belts. These two concentric, doughnut-shaped regions of space girdle the Earth and pose radiation danger to astronauts and spacecraft. 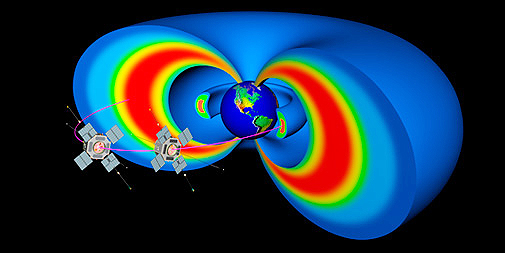 The twin RBSP satellites and the Van Allen radiation belts to be studied. Image Credit: JHU/APL

The two-year RBSP mission was first set for launch on Friday, Aug. 24, but, due to the Tropical Storm Isaac, it is postponed to Thursday, Aug. 30 at 4:05 a.m. EDT. The twin probes will lift off on a United Launch Alliance Atlas V rocket.

The Radiation Belt Storm Probes mission is part of NASA’s Living With a Star Geospace program to explore fundamental processes that operate throughout the Solar System, in particular those that generate hazardous space weather effects near the Earth and phenomena that could affect Solar System exploration.

RBSP is being designed to help us understand the Sun’s influence on the Earth and near-Earth space by studying the planet’s radiation belts on various scales of space and time.

Understanding the radiation belt environment and its variability has extremely important practical applications in the areas of spacecraft operations, spacecraft and spacecraft system design, mission planning, and astronaut safety.

Data from RBSP will deepen scientists’ understanding of how radiation belt particles become energized and aid the design of spacecraft to withstand the strongest radiation.

NASA’s Radiation Belt Storm Probes will, for the first time, allow scientists to use two spacecraft to learn how the belts change over space and time. RBSP will let scientists answer questions surrounding the belts that have existed since their discovery more than half a century ago. Video Credit: JHU/APL

“We really are trying to understand these systems, because if we can’t understand them, we can’t send [astronauts] out there,” said Mona Kessel, NASA RBSP program scientist.

The two-year mission will send twin spacecraft into orbit through both Van Allen Belts, areas of strong radiation from protons, electrons and other subatomic particles trapped in Earth’s magnetic field. Forces originating with solar activity can intensify radiation in the belts; this mission marks the first time two spacecraft have explored the region of space where these acceleration processes occur.

The University of Minnesota-led experiment, the Electric Field and Waves Suite (EFW), will study the sizes, intensities and durations of electric fields that accelerate particles in the belts and how solar activity influences them. Such activity includes the solar wind, a stream of charged particles, or plasma, emanating from the Sun at up to 2,000 kilometers per second (or more than 4 million miles per hour); and coronal mass ejections (CMEs), multibillion-ton bubbles of plasma hurled out from the Sun’s corona. John Wygant, physics professor in the University of Minnesota’s College of Science and Engineering and the principal investigator for EFW, also worked on the original Geospace Mission Design Team that conceived of RBSP. He described how particles from the Sun can intensify radiation in the Van Allen Belts:

“CMEs that go faster than the solar wind—typically 1,000–2,000 kilometers per second—can produce interplanetary shock waves that deliver sharp impulses to the Van Allen Belts,” Wygant said. “They can energize particles to relativistic speeds in 10 to 60 seconds. And if the solar wind is variable, it can jostle Earth’s magnetic field, create variation in electric fields associated with it, and accelerate particles on magnetic field lines.”

“On this mission, we’re especially interested in periods when these acceleration processes are most powerful and the intensity of radiation increases by factors of 100 to 100,000,” Wygant added.

The inner Van Allen Belt lies between about 100 and 10,000 kilometers altitude, the outer between about 13,000 and 60,000 kilometers. These fluid areas can change size and shape, meld into each other and even disappear temporarily. But the International Space Station and other satellites regularly pass through part of the inner belt and so require extra shielding.

The RBSP spacecraft will follow nine-hour orbits through both belts, venturing out as far as 39,000 kilometers and swooping as close as 580 kilometers to Earth. The EFW experiment will measure electric fields in 3-D by means of three pairs of probes, two on cables spanning 100 meters—longer than a football field.

Wygant and his University of Minnesota colleagues, including Professor Cynthia Cattell, three graduate students, several postdoctoral fellows and project manager Keith Goetz, will compare data from the two RBSP spacecraft and from other spacecraft, such as ones that detect interplanetary shock waves.

“We can tell when a shock wave goes by and correlate [our electric field measurements] with it and with changes in magnetic fields,” Wygant said. “We can pick up the geometry of shock waves and electric fields.”

By correlating data on electric fields and radiation intensities (measured by other RBSP experiments), Wygant and his colleagues will get a handle on what kinds of electric fields help energize the particles in the belts. With two spacecraft, EFW can measure the sizes of electric field structures, even those thousands of kilometers wide.

RBSP will also investigate the forces that eject particles from the belts. Some are lost in Earth’s upper atmosphere, where they cause auroras; others escape to the far reaches of Earth’s magnetic field.

Many of the acceleration processes that occur in the inner regions of Earth’s magnetic field are also believed to occur at other planets, at sudden releases of magnetic energy from the Sun’s surface (solar flares); and at more remote objects like ordinary stars; collapsed, rapidly spinning stars called pulsars; and black holes.

“Understanding the similarities and differences between how particles are accelerated at these different places is an ongoing effort for a wide range of scientists,” Wygant said.

James Van Allen, a University of Iowa physicist, first discovered the inner belt in 1958 with a cosmic ray detector on the Explorer 1 spacecraft—NASA’s first mission. The second was found a few months later, using data from Explorer 4 and Pioneer 3.

A related story about the Radiation Belt Storm Probes (RBSP) mission is:  NASA will Study Plasma in Earth’s Atmosphere

Source: The University of Minnesota and NASA