Astronomers have found some of the youngest stars ever seen, thanks to the Herschel space observatory, a European Space Agency mission with important NASA contributions. Astronomers have discovered some of the youngest stars ever seen, surrounded by dense envelopes of gas and dust. A portion of the survey is shown here in two side-by-side images of the same region around the nebula Messier 78 where several of 15 new protostars were found. Herschel detected the extremely young protostars — indicated in the image by the four circles — that were too cold to be picked up in previous scans of the area. On the left, Messier 78 is shown in a three-color composite from three telescopes. In green is the far-infrared light collected by Herschel’s Photodetector Array Camera and Spectrometer (PACS). Appearing in blue is light from Spitzer. Finally, radio wave light gathered by APEX glows red. On the right the same region appears in a separate three-color composite that shows infrared observations from two instruments aboard the Spitzer Space Telescope. Blue and green both show light captured by Spitzer’s Infrared Array Camera (IRAC). Red is light detected by Spitzer’s Multiband Imaging Photometer (MIPS). Image Credit:

Observations from NASA’s Spitzer Space Telescope and the Atacama Pathfinder Experiment (APEX) telescope in Chile, a collaboration involving the Max Planck Institute for Radio Astronomy in Germany, the Onsala Space Observatory in Sweden, and the European Southern Observatory in Germany, contributed to the findings.

Dense envelopes of gas and dust surround the fledging stars known as protostars, making their detection difficult. The 15 newly observed protostars turned up by surprise in a survey of the biggest site of star formation near our Solar System, located in the constellation Orion. The discovery gives scientists a peek into one of the earliest and least understood phases of star formation.

“Herschel has revealed the largest ensemble of such young stars in a single star-forming region,” said Amelia Stutz, lead author of a paper to be published in The Astrophysical Journal and a postdoctoral researcher at the Max Planck Institute for Astronomy in Heidelberg, Germany. “With these results, we are getting closer to witnessing the moment when a star begins to form.”

Stars spring to life from the gravitational collapse of massive clouds of gas and dust. This changeover from stray, cool gas to the ball of super-hot plasma we call a star is relatively quick by cosmic standards, lasting only a few hundred thousand years. Finding protostars in their earliest, most short-lived and dimmest stages poses a challenge.

Astronomers had long investigated the stellar nursery Messier 78 in the Orion Molecular Cloud Complex, a vast collection of star-forming clouds, but had not seen the newly identified protostars until Herschel observed the region. 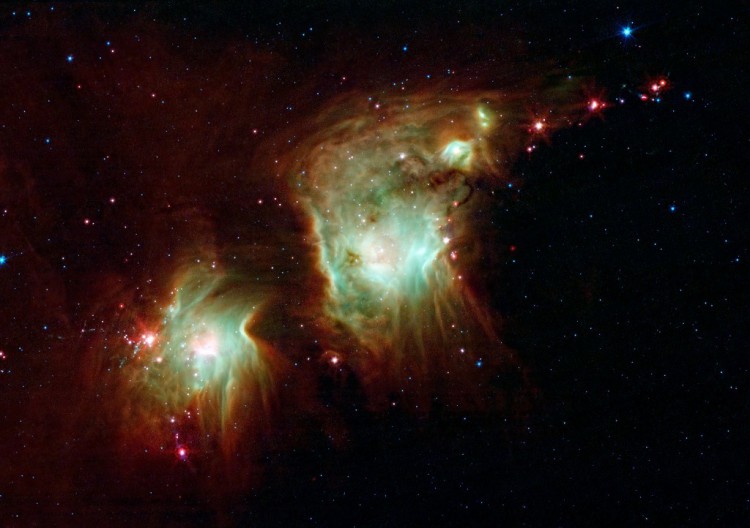 Messier 78 is a reflection nebula and star-forming region of some 10 light-years across, located about 1,600 light-years away in the Orion Molecular Cloud Complex, just to the north of Orion’s Belt in the constellation of Orion. Image Credit: ESO/APEX (MPIfR/ESO/OSO)/T. Stanke et al./Igor Chekalin/Digitized Sky Survey 2

“Previous studies have missed the densest, youngest and potentially most extreme and cold protostars in Orion,” Stutz said. “These sources may be able to help us better understand how the process of star formation proceeds at the very earliest stages, when most of the stellar mass is built up and physical conditions are hardest to observe.”

Herschel spied the protostars in far-infrared, or long-wavelength, light, which can shine through the dense clouds around burgeoning stars that block out higher-energy, shorter wavelengths, including the light our eyes see.

The Herschel Photodetector Array Camera and Spectrometer (PACS) instrument collected infrared light at 70 and 160 micrometers in wavelength, comparable to the width of a human hair. Researchers compared these observations to previous scans of the star-forming regions in Orion taken by Spitzer. Extremely young protostars identified in the Herschel views but too cold to be picked up in most of the Spitzer data were further verified with radio wave observations from the APEX ground telescope.

“Our observations provide a first glimpse at protostars that have just begun to ‘glow’ at far-infrared wavelengths,” said paper coauthor Elise Furlan, a postdoctoral research associate at the National Optical Astronomy Observatory in Tucson, Ariz.

Of the 15 newly discovered protostars, 11 possess very red colors, meaning their light output trends toward the low-energy end of the electromagnetic spectrum. This output indicates the stars are still embedded deeply in a gaseous envelope, meaning they are very young. An additional seven protostars previously seen by Spitzer share this characteristic. Together, these 18 budding stars comprise only five percent of the protostars and candidate protostars observed in Orion. That figure implies the very youngest stars spend perhaps 25,000 years in this phase of their development, a mere blink of an eye considering a star like our Sun lives for about 10 billion years.

Researchers hope to document chronologically each stage of a star’s development rather like a family album, from before birth to early infancy, when planets also take shape.

“With these recent findings, we add an important missing photo to the family album of stellar development,” said Glenn Wahlgren, Herschel Program Scientist at NASA Headquarters in Washington. “Herschel has allowed us to study stars in their infancy.”