News by Subject » Astrophysics » Twists and Turns in Interacting Galaxies

Almost thirty years ago the Infrared Astronomy Satellite, IRAS, discovered that the Universe contained many fabulously luminous galaxies, some of them more than a thousand times brighter than our own galaxy, but which are practically invisible at optical wavelengths. The reason for their optical dimness is that their bright light comes not from stars, which can be seen in the visible, but from dust that is warmed by bursts of star formation to temperatures of about 70 kelvin (about 200 degrees below zero Celsius) where infrared radiation predominates. Luminous galaxies not only shed light on how galaxies evolve and form stars, they act as lanterns that can be seen across cosmological distances, thereby helping scientists study the relatively early Universe. 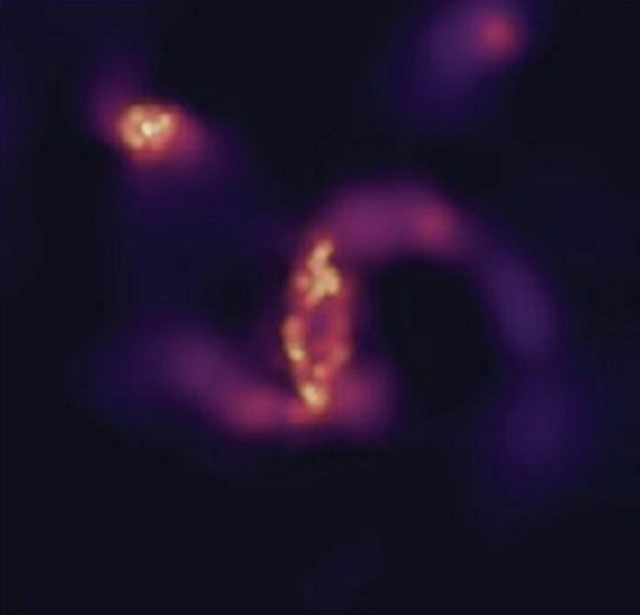 A computer simulation of two colliding galaxies seen here at one early evolutionary stage, showing some of the twists and warps that typically develop and introduce misalignments between a host galaxy and its black hole nucleus. Image Credit: Hopkins 2012

The IRAS galaxies are luminous because they contain so much of this warm dust. Astronomers suspect that most of them have been involved in collisional encounters that stimulated vigorous star formation, as gravitational effects induce interstellar gas to condense into stars. The issue for astronomers is how to confirm and refine these general conclusions. CfA astronomers have an active research effort that uses computer simulations of interacting galaxies to calculate the luminosity of these systems, to uncover how their luminosity evolves with time, and to determine the specific contribution of starburst activity to the infrared emission.

A new paper by CfA astronomers Lars Hernquist and Chris Hayward and two of their colleagues looks carefully at the ways in which galaxy collisions can distort the shapes of the galaxies involved, including the shapes and orientations of the regions around their central supermassive black holes. They compare the orientation of the nuclei (as measured by disks and outflowing jets) with the large-scale orientations of the host galaxies. In their computer simulations, they report finding only weak correlations between these alignments. It turns out that misalignments can easily be introduced as giant clumps of material fall into the region of the black hole and alter its spin, or more gradually as twists develop and evolve in the gas of the spinning galaxy.

Their conclusion is in excellent agreement with the observational data, namely, that there is a poor correlation between the orientation of the spin axis of a host galaxy and of its black hole nucleus. The results will help shed light on a range of related issues, including how infalling gas in a galaxy can efficiently feed its black hole, and whether light from the nuclear region is likely to be obscured by viewing through the galaxy’s disk of material.