A team of Penn State University astronomers has obtained very precise measurements of a pair of stars that are orbited by a planet. The orbits of the stars and planet in the system, named Kepler-16, are aligned so that they eclipse or transit each other when observed from Earth. These new measurements will aid astronomers in understanding how stars and planetary systems form. 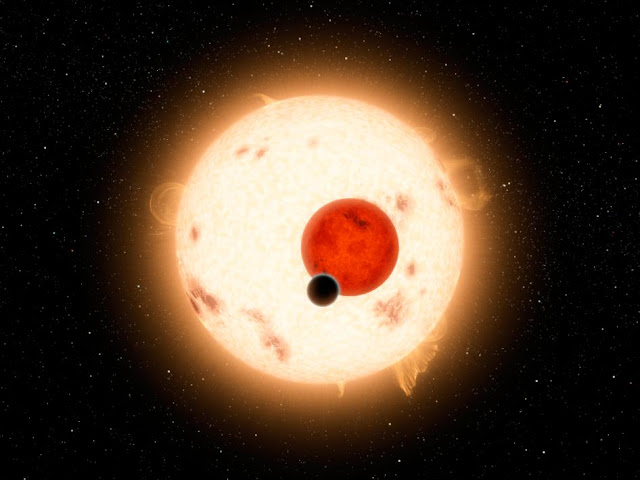 The Penn State astronomers used the spectroscopic capabilities of the Hobby-Eberly Telescope at McDonald Observatory to separate the light from the two Kepler-16 stars into individual wavelengths, which allowed them to precisely measure the masses of the stars. This system was discovered in 2011 by NASA’s Kepler spacecraft, and was the first “eclipsing binary” star system conclusively shown to host a planet orbiting two stars. The Penn State measurements are among the most precise ever made for low mass stars like those in Kepler-16, and also provide an important independent test of a sophisticated new technique for measuring masses from Kepler spacecraft data. “Precise measurements of stellar masses, radii and system architectures provide important insights into how planets form,” said the leader of the Penn State team, Center for Exoplanets and Habitable Worlds Postdoctoral Fellow Chad Bender. The research is published in the 1 June issue of the Astrophysical Journal Letters.

NASA’s Kepler spacecraft is continuously monitoring the brightness of about 150,000 stars in order to search for Earth-mass planets. In 2011, a Kepler science team lead by Laurance Doyle at the SETI Institute combined precise timing of the Kepler-16 eclipses with a new sophisticated modeling technique to derive the masses of the two stars, which are about 70 percent and 20 percent that of the Sun, and of the orbiting planet. The technique also has been applied to several similar systems.

In the case of close binary stars, such as Kepler-16, light from the individual stars is blended together. “While the Kepler-16 modeling did provide a solid estimate of the masses of the stars, we wanted to separate the light from each star so they could be studied individually,” said Jason Wright, assistant professor of astronomy and a member of the research team. The spectroscopy obtained by the Penn State researchers facilitates this disentangling, and yields the masses of the stars with a much simpler analysis.

“As the two Kepler-16 stars move in their 41-day orbit, their velocity relative to the Earth periodically changes, and we were able to track these motions by obtaining six high-resolution-spectroscopic observations with the Hobby-Eberly Telescope,” said Suvrath Mahadevan, co-investigator and assistant professor of astronomy and astrophysics. The team used these data to disentangle the light from the individual stars, which was a challenge because the star Kepler-16B contributes only about 3 percent of the total light from the system. “The resulting velocity measurements, combined with Kepler’s Laws of Motion, directly give the masses of stars Kepler-16A and Kepler-16B with precisions of 2.5 percent and 1.5 percent, respectively,” Mahadevan said.

“These mass measurements are among the most precise that have been made for low-mass stars,” said Bender. “Models that describe the formation and evolution of stars and planets have improved considerably over the past decade, but making additional improvements requires new measurements of numerous stars with the precisions that we have achieved here.” In addition, the Penn State results confirm the viability of the new technique originally used by the Kepler team, through completely independent data and a completely different analysis technique.

“Understanding the radii and masses of low-mass stars such as these is critical for the search for planets in habitable zones,” Mahadevan said. The Kepler-16 measurements are the initial results from a much larger survey being led by Penn State to measure precise masses of more than 100 eclipsing binary stars discovered by Kepler.

This artist’s conception illustrates the Kepler-16 system (white) from an overhead view, showing its planet Kepler-16b and the eccentric orbits of the two stars it circles (labeled A and B). Image credit: NASA/Ames/JPL-Caltech

“The Kepler mission is revealing at least as much about Sun-like and low-mass stars as it is about planets; it’s really revolutionizing the field of stellar astrophysics,” noted Wright. “These observations illustrate how measurements with the Hobby-Eberly Telescope and other ground-based telescopes amplify and extend the fantastic science Kepler is doing, and can teach us more about these stars and the planets that orbit them.”