ESA’s Mars Express has observed the southern part of a partially buried approximately 440-km wide crater, informally named Ladon basin. The images, near to where Ladon Valles enters this large impact region reveal a variety of features, most notably the double interconnected impact craters Sigli and Shambe, the basins of which are criss-crossed by extensive fracturing.

The image shows the interconnected craters Sigli and Shambe, believed to have formed when a large meteorite fragmented in to two pieces just before impact. Extensive fracturing can be seen within the craters. Above the craters (west), creek-like flow channels can be seen leading in to the wider impact basin region to the right (north).
Credits: ESA/DLR/FU Berlin (G. Neukum)

This region, imaged on 27 April by the high-resolution stereo camera on Mars Express is of great interest to scientists since it shows significant signs of ancient lakes and rivers. 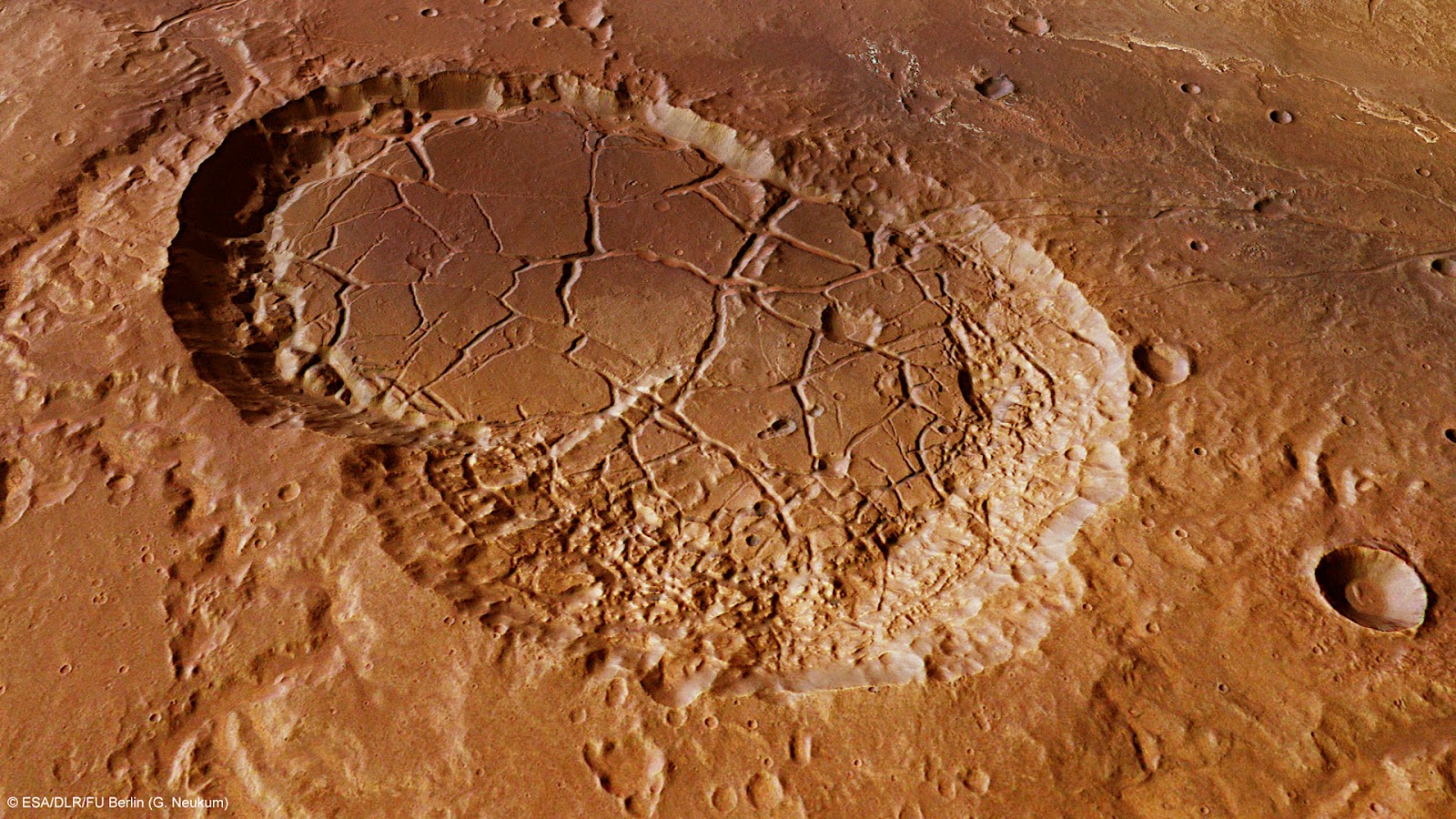 Sigli and Shambe dominate this image, which highlights the deep fracturing within the crater walls. The shape of the craters leads scientists to believe they were formed from the same impactor, which fragmented into two pieces just before hitting Mars.
Credits: ESA/DLR/FU Berlin (G. Neukum)

Elliptical craters like this 16 km-wide example are formed when asteroids or comets strike the surface of the planet at a shallow angle. 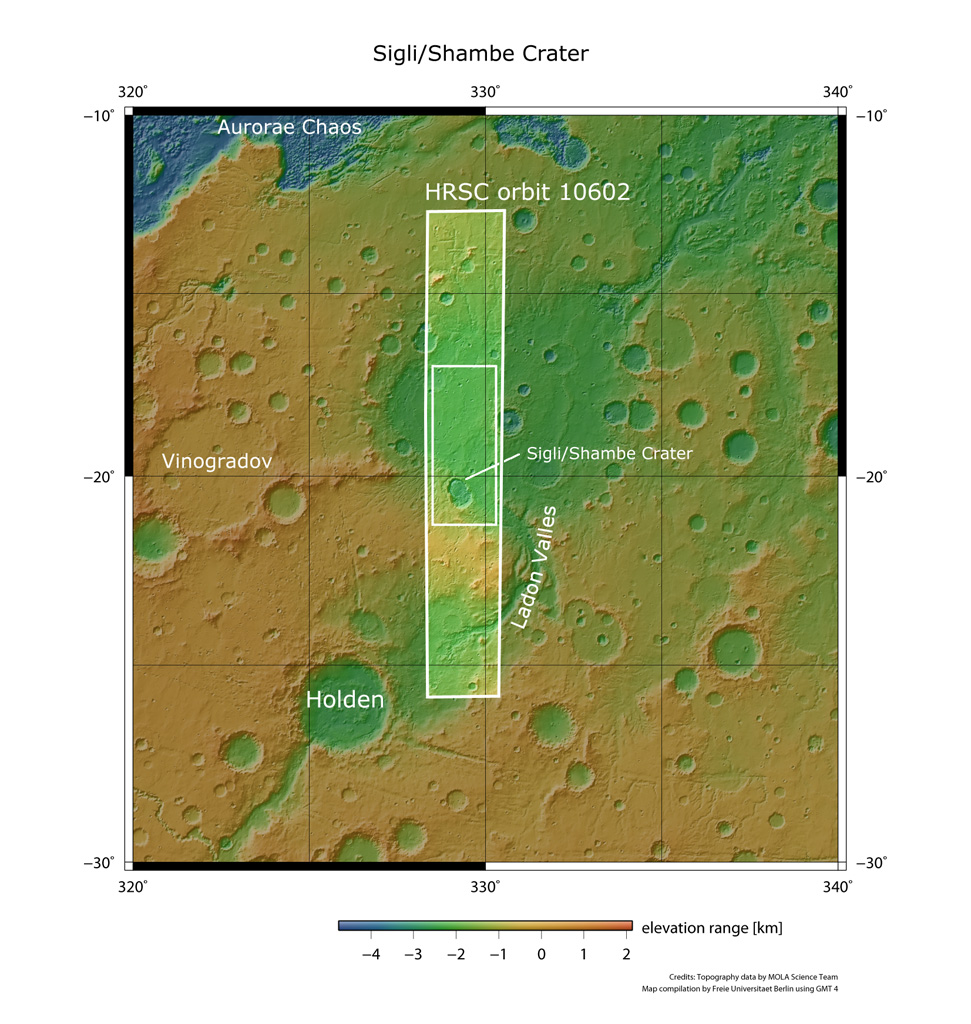 Scientists have suggested that a fluidised ejecta pattern indicates the presence of subsurface ice which melted during the impact. Subsequent impacts have created a number of smaller craters in the ejecta blanket.

The interconnected craters Sigli and Shambe are thought to have formed later when an incoming projectile split into two pieces just before impact. The joined craters were then partly filled with sediments at some later epoch.

Above the interconnected craters of Sigli and Shambe (west), flow channels can be seen leading in to the large impact basin. The outflow of Ladon Valles itself can be seen towards the bottom of the image (east). Scientists have detected clay minerals within these deposits, suggesting the relatively long-lasting presence of liquid water in the past.
Credits: ESA/DLR/FU Berlin (G. Neukum)

Deep fractures can be seen within the craters whilst in the central and right part of the image, smaller craters and more subtle curved fractures appear. These fractures on the basin floor extend beyond the image borders and form concentric patterns. The fractures are believed to have evolved by compaction of the huge sediment loads deposited within the impact basin.

The outflow of Ladon Valles in to Ladon basin is located towards the east of Sigli and Shambe Craters, towards the bottom of the image. Here, and in several other parts of the image, lighter-toned layered deposits can be seen. Researchers have detected clay minerals within these deposits, suggesting a relatively long-lasting presence of liquid water in the region’s past.

In addition, winding, valley-like dendritic structures running into the larger basin can be seen above Sigli and Shambe Craters, running in to the larger impact basin, again indicating flowing water at some distant epoch.

This colour-coded plan view is based on a digital terrain model of the region, from which the topography of the landscape can be derived. The colour coding brings in to stark relief the fracturing inside Sigli and Shambe and the winding flow channels above (west) of the craters leading in to the relatively flat impact basin. Centred at around 18°S and 329°E, the image has a ground resolution of about 20 m per pixel.
Credits: ESA/DLR/FU Berlin (G. Neukum)

This anaglyph 3D image can be viewed using stereoscopic glasses with red–green or red–blue filters. The image shows the concentric arc-shaped fractures in the wider impact basin, as well as the more extensive fracturing inside the interconnected craters Sigli and Shambe. Centred at around 18°S and 329°E, the image has a ground resolution of about 20 m per pixel.
Credits: ESA/DLR/FU Berlin (G. Neukum)