News by Subject » The Solar System » Where are the Waves on Titan’s Lakes?

One of the most shocking discoveries of the past 10 years is how much the landscape of Saturn’s moon Titan resembles Earth.  Like our own blue planet, the surface of Titan is dotted with lakes and seas; it has river channels, islands, mud, rain clouds and maybe even rainbows.  The giant moon is undeniably wet. 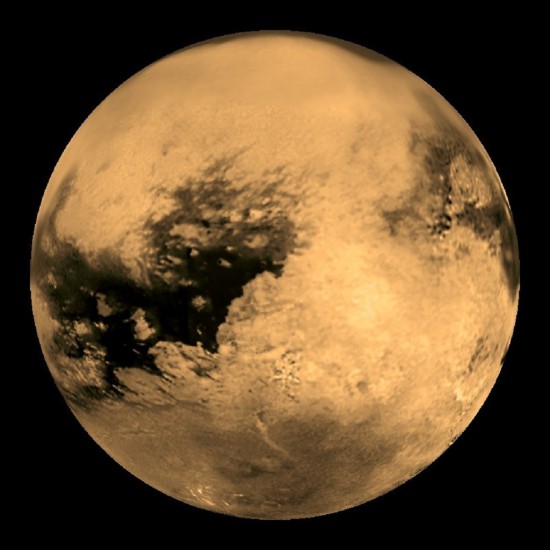 The “water” on Titan is not, however, H2O.  With a surface temperature dipping 290 degrees F (143 C) below zero, Titan is far too cold for liquid water. Instead, researchers believe the fluid that sculpts Titan is an unknown mixture of methane, ethane, and other hard-to-freeze hydrocarbons.

The idea that Titan is a wet world with its own alien waters is widely accepted by planetary scientists. Nothing else can account for the observations: NASA’s Cassini spacecraft has flown by Titan more than 90 times since 2004, pinging the Moon with radar and mapping its lakes and seas. ESA’s Huygens probe parachuted to the surface of Titan in 2005, descending through humid clouds and actually landing in moist soil.

Yet something has been bothering Alex Hayes, a planetary scientist on the Cassini radar team at Cornell University.

If Titan is really so wet, he wonders, “Where are all the waves?”

Here on Earth, bodies of water are rarely still.  Breezes blowing across the surface cause waves to ripple and break; raindrops striking sea surfaces also provide some roughness.  Yet on Titan, the lakes are eerily smooth, with no discernable wave action down to the millimeter scale, according to radar data from Cassini. This glint of sunlight detected by Cassini in 2009 is widely thought to be a reflection from the mirror-like surface of one of Titan’s northern lakes. Image Credit: NASA/JPL/University of Arizona/DLR

“We know there is wind on Titan,” says Hayes. “The moon’s magnificent sand dunes [prove] it.”

Add to that the low gravity of Titan—only 1/7th that of Earth—which offers so little resistance to wave motion, and you have a real puzzle.

Researchers have toyed with several explanations.  Perhaps the lakes are frozen. Hayes thinks that is unlikely, however, “because we see evidence of rainfall and surface temperatures well above the melting point of methane.”  Or maybe the lakes are covered with a tar-like substance that damps wave motion. “We can’t yet rule that out,” he adds.

The answer might be found in the results of a study Hayes and colleagues published in the July 2013 online edition of the journal Icarus. Taking into account the gravity of Titan, the low viscosity of liquid hydrocarbons, the density of Titan’s atmosphere, and other factors, they calculated how fast wind on Titan would have to blow to stir up waves: A walking-pace breeze of only 1 to 2 mph should do the trick.

Saturn’s giant moon Titan is dotted with hydrocarbon lakes and seas that bear an uncanny resemblance to bodies of water on Earth. Strangely, though, Titan’s lakes and seas have no waves. Video Credit: Science@NASA

This suggests a third possibility: the winds just haven’t been blowing hard enough. Since Cassini reached Saturn in 2004, Titan’s northern hemisphere (where most of the lakes are located) has been locked in the grip of winter.  Cold heavy air barely stirs, and seldom reaches the threshold for wave-making.

“According to [climate models], winds will pick up as we approach the solstice in 2017 and should be strong enough for waves,” he says.

If waves appear, Cassini should be able to detect them.  Radar reflections from wavy lake surfaces can tell researchers a great deal.  Wave dimensions, for instance, may reveal the viscosity of the underlying fluid and, thus, its chemical composition.  Also, wave speeds would track the speed of the overlying winds, providing an independent check of Titan climate models.

Hayes is excited about “bringing oceanography to another world. All we need now,” he says, “are some rough seas.”