News by Subject » Astrophysics » Witnessing the Birth of a Monster Star

New observations using the Atacama Large Millimeter/submillimeter array (ALMA) have given astronomers the best view yet of a monster star in the process of forming within a dark cloud. A stellar womb with over 500 times the mass of the Sun has been found — the largest ever seen in the Milky Way — and it is still growing. The embryonic star within the cloud is hungrily feeding on material that is racing inwards. The cloud is expected to give birth to a very brilliant star with up to 100 times the mass of the Sun.

This composite shows the region around the massive star-forming region SDC 335.579-0.292 seen using NASA’s Spitzer Space Telescope and ALMA. The Spitzer view is at infrared wavelengths (3.6, 4.5 and 8.0 microns) and the ALMA view is at wavelengths around three millimetres. The yellow blob at the center of the ALMA images is a stellar womb with over 500 times the mass than the Sun — the largest ever seen in the Milky Way. The embryonic star within is hungrily feeding on the material that is racing inwards. It is expected to give birth to a very brilliant star with up to 100 times the mass of the Sun. Image Credit: ALMA (ESO/NAOJ/NRAO)/NASA/JPL-Caltech/GLIMPSE

The most massive and brightest stars in the Milky Way galaxy form within cool and dark clouds but the process remains not just shrouded in dust, but also in mystery [1]. An international team of astronomers has now used ALMA to perform a microwave prenatal scan to get a clearer look at the formation of one such monster star that is located around 11,000 light-years away, in a cloud known as the Spitzer Dark Cloud (SDC) 335.579-0.292.

There are two theories on the formation of the most massive stars. One suggests that the parental dark cloud fragments, creating several small cores that collapse on their own and eventually form stars. The other is more dramatic: the entire cloud begins to collapse inwards, with material racing towards the cloud’s center to form one or more massive behemoths there. A team led by Nicolas Peretto of CEA/AIM Paris-Saclay, France, and Cardiff University, UK, realized that ALMA was the perfect tool to help find out what was really happening.

SDC335.579-0.292 was first revealed as a dramatic environment of dark, dense filaments of gas and dust through observations with NASA’s Spitzer Space Telescope and ESA’s Herschel Space Observatory. Now the team has used the unique sensitivity of ALMA to look in detail at both the amount of dust and the motion of the gas moving around within the dark cloud — and they have found a true monster. 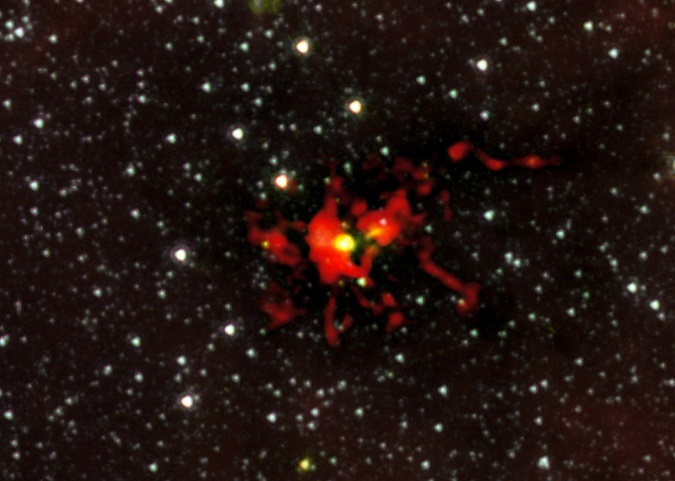 Observations of the dark cloud SDC 335.579-0.292 using the Atacama Large Millimeter/submillimeter array (ALMA) have given astronomers the best view yet of a monster star in the process of forming. A stellar womb with over 500 times the mass than the Sun has been found and appears as the yellow blob near the centre of this picture. This is the largest ever seen in the Milky Way — and it is still growing. The embryonic star within is hungrily feeding on the material that is racing inwards. It is expected to give birth to a very brilliant star with up to 100 times the mass of the Sun. This image combines data from ALMA and NASA’s Spitzer Space Telescope. Image Credit: ALMA (ESO/NRAJ/NRAO)/NASA/Spitzer/JPL-Caltech/GLIMPSE

“The remarkable observations from ALMA allowed us to get the first really in-depth look at what was going on within this cloud,” says Peretto. “We wanted to see how monster stars form and grow, and we certainly achieved our aim! One of the sources we have found is an absolute giant — the largest protostellar core ever spotted in the Milky Way.”

This core — the womb of the embryonic star — has over 500 times the mass of our Sun swirling around within it [2]. And the ALMA observations show that much more material is still flowing inwards and increasing the mass still further. This material will eventually collapse to form a young star up to 100 times as massive as our home star — a very rare beast.

“Even though we already believed that the region was a good candidate for being a massive star-forming cloud, we were not expecting to find such a massive embryonic star at its centre,” says Peretto. “This object is expected to form a star that is up to 100 times more massive than the Sun. Only about one in ten thousand of all the stars in the Milky Way reach that kind of mass!”

This video starts with a view of the Milky Way and closes in on the constellation of Norma and one of the richest parts of the sky. We see many star clusters and glowing nebulae, but many objects of great interest are hidden by thick clouds of dust and can only be seen at longer wavelengths. The final part of the video shows a new view of the dark cloud SDC 335.579-0.292 using the Atacama Large Millimeter/submillimeter array (ALMA). These observations have given astronomers the best view yet of a monster star in the process of forming. Video Credit: ESO/Nick Risinger (skysurvey.org), DSS, ALMA(ESO/NAOJ/NRAO), NASA/JPL-Caltech/GLIMPSE. Music: movetwo

“Not only are these stars rare, but their birth is extremely rapid and their childhood is short, so finding such a massive object so early in its evolution is a spectacular result,” adds team member Gary Fuller from the University of Manchester, UK.

Another team member, Ana Duarte Cabral from the Laboratoire d’Astrophysique de Bordeaux, France, emphasises that “the ALMA observations reveal the spectacular details of the motions of the filamentary network of dust and gas, and show that a huge amount of gas is flowing into a central compact region”. This strongly supports the theory of global collapse for the formation of massive stars, rather than fragmentation.

These observations formed part of the Early Science phase of ALMA, and have made use of just a quarter of the full array of antennas. “We managed to get these very detailed observations using only a fraction of ALMA’s ultimate potential,” concludes Peretto. “ALMA will definitely revolutionize our knowledge of star formation, solving some current problems, and certainly raising new ones.” 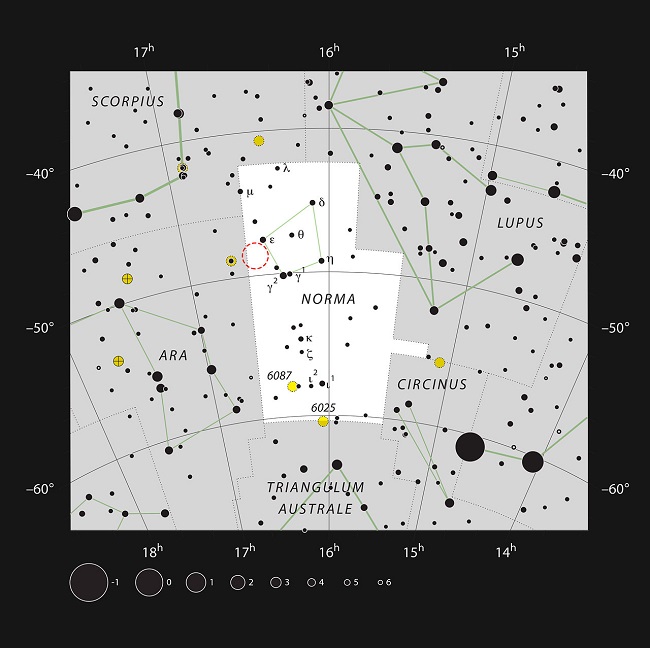 This chart shows the southern constellation of Norma (The Carpenter’s Square). Most of the stars that can be seen in a dark sky with the unaided eye are marked. The location of the dark star-forming cloud SDC 335.579-0.292 is indicated with a red circle. Although the dark cloud cannot be seen visually there are many other brighter objects in this part of the sky, including the star cluster NGC 6134. Image Credit: ESO, IAU and Sky & Telescope

This research was presented in a paper entitled “Global collapse of molecular clouds as a formation mechanism for the most massive stars”, to appear in Astronomy & Astrophysics.

[1] Astronomers use the expression “massive stars” to mean those with roughly ten or more times the mass of the Sun. It refers to the star’s mass, not its size.

[2] This star formation region is forming many stars. The 500 solar mass core is the most massive of several.